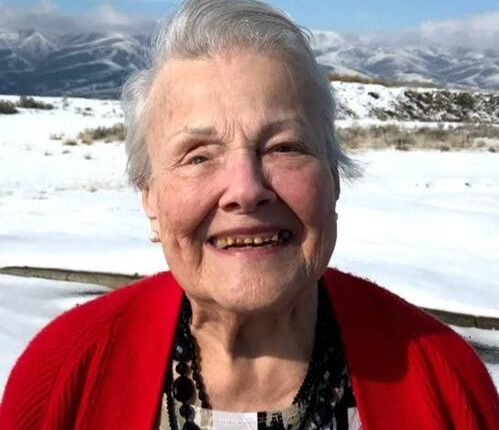 Mother was born on August 24, 1930 in McAllen, Texas, to Gerald I. Lambert and Isabelle Reaugh Lambert. She was the oldest of six children – four girls and two boys.

After Bill graduated from Texas A&M, they moved back to McAllen, where in the summer of 1950 their daughter Margaret Ruth “Margie” was born. Soon after, a job offer from Lockheed Aeronautics in Burbank, California, they got roots back and moved to California.

A son, William Jr. “Bill,” and two years later a daughter, Cinde, joined the family in Burbank. Janet, the youngest, was born in 1956, but by that time the family had moved to Granada Hills in the San Fernando Valley of California.

A few years later, mom and our father divorced. It was a very big change for all of us when mom became a single parent and joined the external workforce full-time with four young children. She went to Litton Data Systems and worked there until she retired about 20 years later. Times were tight for us, but there were also many good times.

One day a special man entered Mommy’s life who also worked for Litton, and on June 16, 1963, she married Donald F. Horne in Las Vegas. Don became a willing stepfather to their four children, but the eldest was 13 and definitely not easy to get along with due to distrust issues.

All of a sudden we were going on family trips, to the movies, dinner, day trips, and family vacations. We had never done these things with a dad before, and even Margie came over and began to trust. Soon Don became “Dad”.

Don’s son, Steven H. Horne, came to us in the summer of 1964. While Steve was officially our stepbrother, he quickly became “our brother” and mother’s son. Mom never referred to Steve as anything other than her son and was very persistent.

In 1979, Mom and Dad retired and moved to Idaho. Cinde, her husband Frank, and their son Jason joined the people in the move. A few months later in the year, Margie, her husband Pete, and their two children also moved to Lewiston.

People loved to travel and bought an RV. They traveled to Texas and Washington many times to visit Mommy’s sisters and brothers and their families; and just really love it. There were also annual trips to Hawaii to visit where Dad grew up, his mother and brother, Harold, and Harold’s family.

Over the years, Mom worked at several banks in Lewiston, and for several years she and Dad worked at McDonald’s.

Mum and Dad were members of the Orchards United Methodist Church and worked in the church office, helping coordinate communion, helping with potluck dinners, selling items, etc. Donald F. Horne died on June 4, 1994. But Mum continued to work at the church until well into their 80s.

Other survivors include two sisters, Mary Alice Powell from San Antonio, Texas and Vivian Pennell from Orofino, and brother David H. Lambert and his wife Nina from Bryan, Texas.

The family suggests building monuments to the Orchards United Methodist Church in Lewiston.

Margie, Steven, Bill, Cinde and Janet would like to take this opportunity to express our great thanks to Shelli Anderson (the oldest granddaughter) for her commitment and wonderful care to our mother.

How many abandoned oil wells threaten the national park?