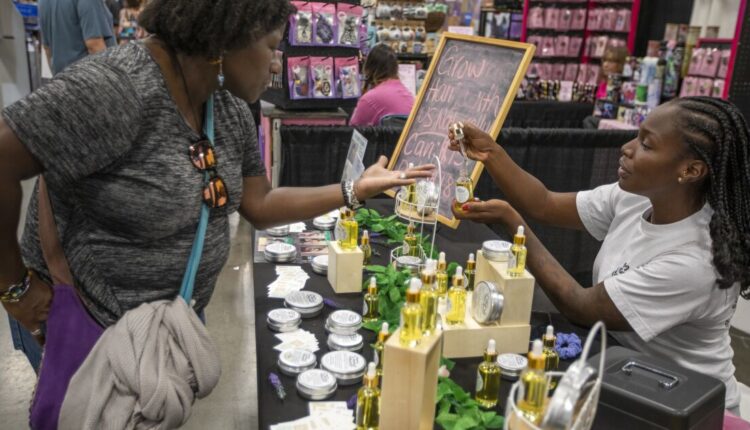 In a competitive Los Angeles-area congressional district, the campaign playbooks are well-defined. Republican Rep. Mike Garcia is relying on voter discontent about the economy. His Democratic challenger, Christy Smith, wants abortion rights to be top of mind.

One issue, though, is far less prominent than many anticipated: Garcia’s vote to block the results of the 2020 presidential election. It was a perplexing move by the Santa Clarita Republican who had just won his swing district on a whisper-thin margin.

Garcia was put on the defensive, while Democrats planned to make it a defining issue in this election. Then they didn’t.

In the battle over Garcia’s district, as well as in the national political landscape, the Capitol siege on Jan. 6 has been a minor subplot. There have been efforts — notably by President Biden and the congressional panel investigating the attack — to elevate it in the public’s consciousness as a do-or-die moment for democracy.

Still, there is little sign that the riot, along with the continued denialism about Donald Trump’s 2020 loss and the precarity of future elections, will mobilize people to the polls or determine a swing voter’s pick.

Punditry about this dynamic tends to be blunt: Americans are moving on, Americans don’t care. But interviews with residents of Garcia’s district, as well as pollsters, strategists and political scientists, paint a more complex picture.

In a deeply divided nation, the one thing unifying Americans is a shared sense of unease. A vast majority believe the country is heading in the wrong direction, but fewer agree on why that is — and which political party is to blame.

This occasional series, America Unsettled, will examine the complicated reasons behind voters’ decisions in this momentous and unpredictable midterm election.

The Capitol violence still resonates in subtle but discomfiting ways, invoking strong opinions from voters. Many, though, see those views as distinct from their choice at the ballot box—and they have little appetite to see Jan. 6 become election-season fodder.

“It’s going to detract from more important issues that would be more pertinent for the country,” said Eric Allec, a constituent of Garcia’s who condemned the attack. “We’re just going to be stuck in this circus of do we limit free speech? Do we limit the right to assembly? … I just see that being a very frustrating and bad place to go.” Garcia was destined to be a top target for Democrats the moment he was sworn in for his first full term. He had won the northern Los Angeles County seat the previous fall by just 333 votes, and his district grew less Republican after redistricting. His objection to the electoral votes of Arizona and Pennsylvania gave his foes a line of attack.

Democrats quickly released two insurrection-focused ads, and outside spenders also joined the fray. Among them was Defeat Seditionists, a liberal super PAC whose initial messaging against the congressman “focused on highlighting Mike Garcia’s extreme record when it comes to Jan. 6,” said Joe Jacobson, who runs the group.

The congressman, in a lengthy explanation of his actions, asserted his intention was not to overturn the 2020 election — although that would have been the result if the GOP’s efforts succeeded.

Garcia’s vote still ranks Michael Campbell, 50, an Army veteran in Lancaster who was “wildered” to learn Garcia, a former Navy pilot, could take such a position.

“The way he’s voted is just completely inconsistent with the oath we gave as military members,” Campbell said.

As that day receded further into the past, it began to look less like a transformative moment and more like a moment transformed by polarization. Despite broad disapproval of the attack, Americans’ beliefs about its significance and who is to blame are divided along party lines.

A CNN survey this summer found that Democrats were far more likely than Republicans to consider Jan. 6 as a crisis; Most Republicans, meanwhile, do not believe Trump’s actions encouraged political violence. Democrats nearly unanimously blame Trump for inciting the riot.

Several polls show voters consider “threats to democracy” a top electoral concern, but the concept holds vastly different meanings for Democrats, who worry about the preservation of free and fair elections, and Republicans, who fear government control and election fraud.

Lynn Vavreck, a political scientist at UCLA, said the public reaction to Jan. 6 is an example of how American politics have become calcified. “The Bitter End,” a new book co-written by Vavreck, lays out four causes of this state of calcification: an increasing ideological difference between the two parties; growing homogeneity within the parties; a focus on identity-inflected issues like gender, immigration and race over debates on the size and role of government; and a rough parity between the support for the two parties, which means both are always on the cusp of winning. 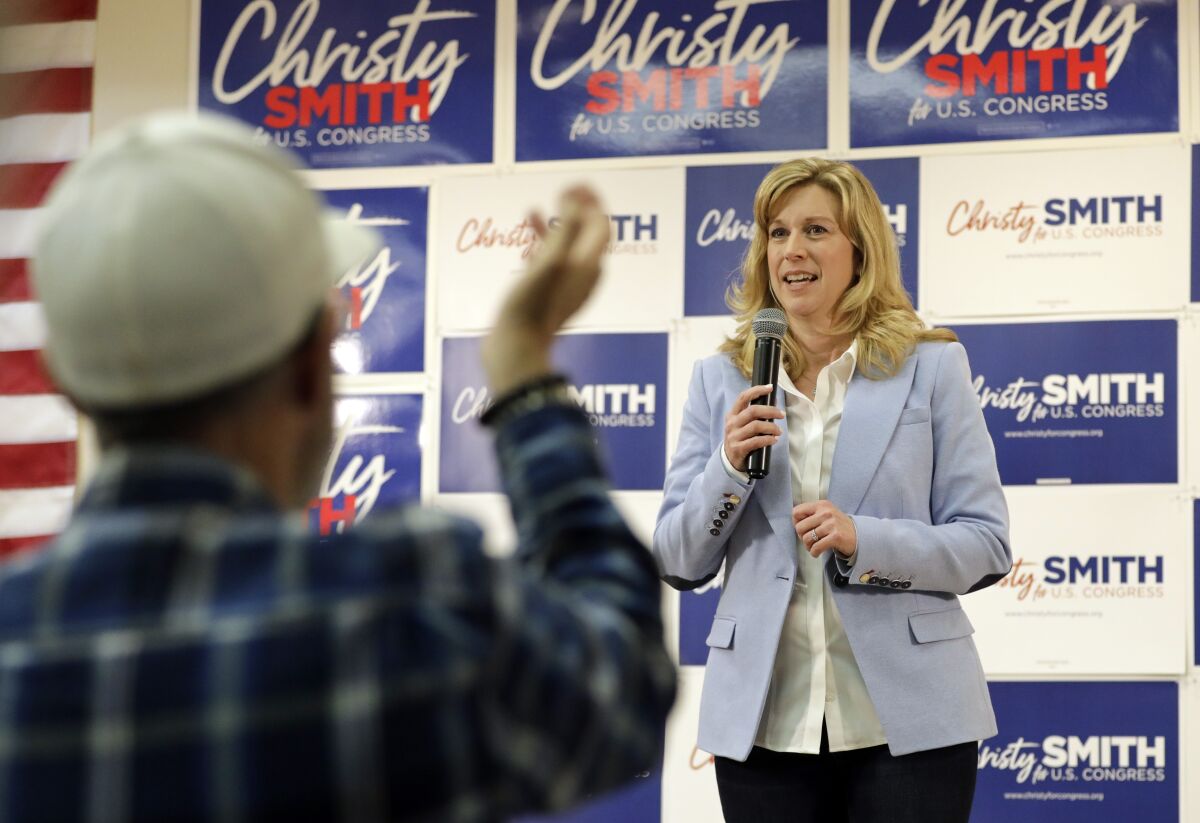 “The fact that something like a global pandemic, or a massive social justice movement, or an insurrection at the Capitol — none of those unprecedented things shook this dimension,” Vavreck said. “It didn’t change the state of play. In fact, what’s worse, those major crises got subsumed by the calcification.”

In Garcia’s district, the primary effect of Jan. 6 was to worsen Americans’ already bleak view of politics, said Hunt Braly, a Valencia attorney.

“It just adds to the cynicism — from perception that Democrats may be taking political advantage of it, cynicism about Trump and which way he was on it,” said Braly, 67, who is active in Republican politics in the area. “Cynicism that there are these hardcore [people] on both sides that won’t let go and deal with reality.”

Instead of Jan. 6, the biggest political jolt this election is the Supreme Court’s Dobbs decision, which ended 50 years of national abortion rights, an issue that instantly resonated with many voters and became the driving focus of Democratic campaigns.

Some in the party say the abortion debate has indirectly drawn the Capitol attack back into the political consciousness as Democrats seek to craft a narrative of a radicalized GOP.

“There are two really potent proof points. One is Jan. 6. And two is Dobbs overturning the right to abortion,” said Navin Nayak, president of the Center for American Progress Action Fund, a progressive advocacy group.

America’s rickety democracy is shaping voter attitudes in other inscrutable ways. The congressional panel investigating Jan. 6, which will hold another hearing Wednesday after a nearly two-month hiatus, did not cause Republicans to loudly abandon Trump.

But the findings — along with the former president’s myriad legal troubles — have had a cumulative effect, said Sarah Longwell, an anti-Trump Republican strategist who conducts focus groups with voters across the country. The Trump voters she interviewed, she said, are now questioning his electability in 2024.

“This is seeing into the consciousness of Americans,” Longwell said.

Jan. 6 has been more prominent in a handful of races — largely against candidates who were at the US Capitol that day, such as Arizona Secretary of State candidate Mark Finchem and Doug Mastriano, the GOP nominee for Pennsylvania governor.

Biden also tried to elevate the issue, giving a prime-time address warning in stark terms that Trump and his allies posed a threat to democracy.

Jamie Goodreau, a retired teacher in Palmdale, knew that conservatives would dismiss the speech as politically motivated. She too leans conservative, although she left the Republican Party as soon as Trump became the GOP’s 2016 presidential nominee. Goodreau, 58, found herself agreeing with Biden’s depiction of her former party.

“One of the things that I think that it does do is remind us, ‘Hey, those going to the polls — this is what is at stake. Do we want more MAGA-minded people in Congress? Do they really speak for mainstream America?’” Goodreau said.

Still, the idea of ​​Jan. 6 featured in a campaign ad or mailer gives her pause.

“I don’t like the politicization of catastrophes … out of sensitivity for those that were lost that day,” she said. “So yeah, it’s difficult. It’s really difficult.” 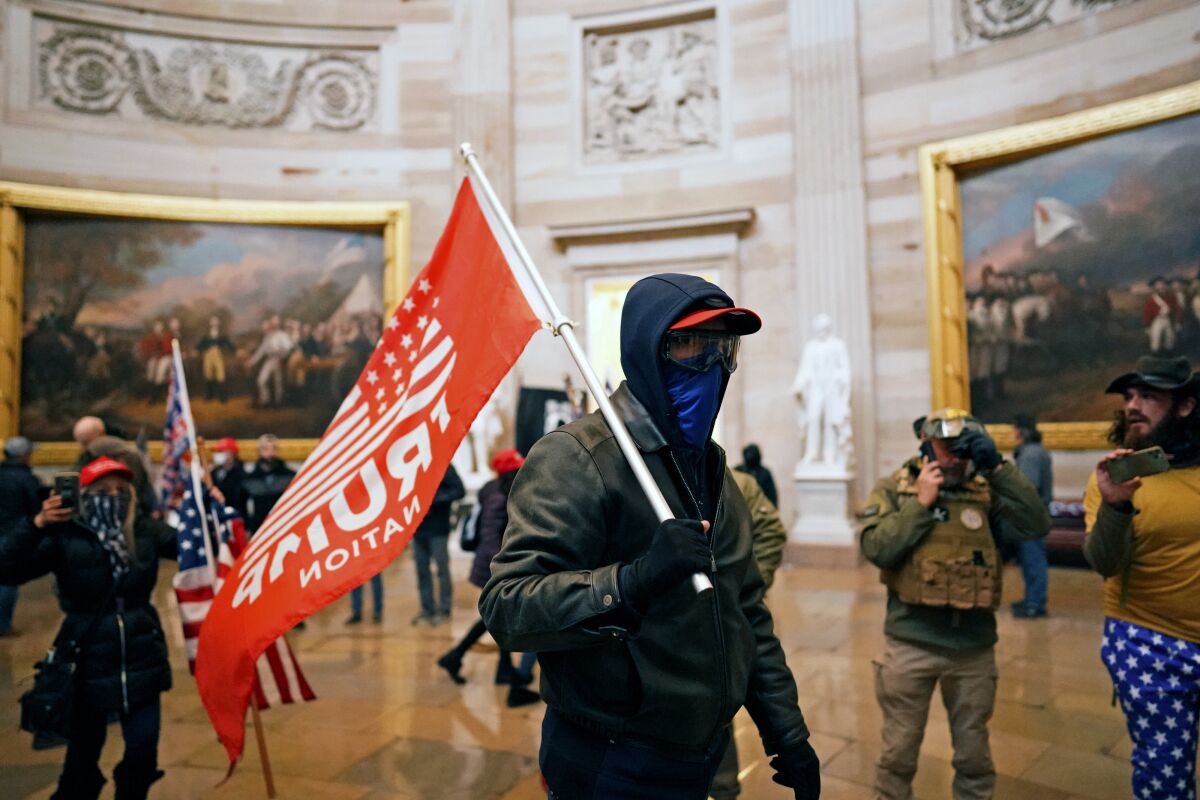 When Ashakia Morgan recalls Jan. 6, she thinks of white people breaking into the Capitol with little immediate consequence, a stark contrast to the treatment of Black people demonstrating against police violence. She thinks about what patriotism means for Black Americans. She does not, however, think about her vote in November.

That choice will be shaped by mainly local concerns: homelessness, high gas prices and the economic health of her community.

“What are you guys doing for 12th Street West in Lancaster, California?” said Morgan, 26, who runs a small hair-care business. She’s unsure which candidate offers the best answer.

Allec, 46, an aerospace IT specialist living in Antelope Acres, also has “no inkling” about his vote. Jan 6 would be a “topic of consideration,” but behind his concerns about the region’s high cost of living, American competitiveness with overseas technology companies and foreign policy.

The two undecided voters, both registered Democrats but resolutely open to either party, encapsulate why the insurrection has receded from the foreground in the toss-up race for California’s 27th Congressional District.

Many voters in the district aren’t aware of Garcia’s position to reject the presidential results in January 2021. Time has benefited Garcia, said R. Rex Parris, the Republican mayor of Lancaster, as well as the economy being more front of mind for residents than the former president.

“Whatever taint [Trump] had on Mike, it’s dropping off,” Parris said, adding that Garcia’s work for military families and other constituent services “forgives a lot of sins.”

Appearing in a recent campaign ad wearing a bomber jacket and striding beside a fighter jet — an especially potent image in this high desert defense hub — Garcia has pitched bread-and-butter priorities such as lowering taxes.

“Rep. Garcia is speaking to voters on the issues they’ve overwhelmingly shown they care most about — record inflation, skyrocketing prices, and the economic burdens on working families created by the progressive policies coming out of Washington, DC,” said Ben Williamson, a spokesman for Garcia’s campaign.

Smith, his Democratic opponent, has also made appeals to voters’ pocketbooks, but abortion has emerged as the dominant theme in vividly personal terms. Emphasizing Garcia’s support for a nationwide abortion ban prior to the Dobbs ruling, she speaks of how her own miscarriage and two high-risk pregnancies could have been affected under such a law.

In Congress, Democrats have put the political pressure on Republicans with legislation protecting other rights that may be vulnerable under the Dobbs ruling. A measure to enshrine same-sex marriage into law was backed by nearly 50 House Republicans, including Garcia, and now awaits final passage in the Senate. Garcia, along with nearly all other House Republicans, opposed another bill to protect the right to use contraception.

Even the Defeat Seditionists effort has redirected its focus from Jan. 6 to use the ripple effects from the abortion ruling as a cudgel against Garcia — a message that was far more compelling to voters, according to Jacobson, the group’s leader.

“Democracy is an abstract concept,” Jacobson said. “Much more so than ‘I can’t go to my friends’ wedding because Republicans have banned same-sex marriage.’”