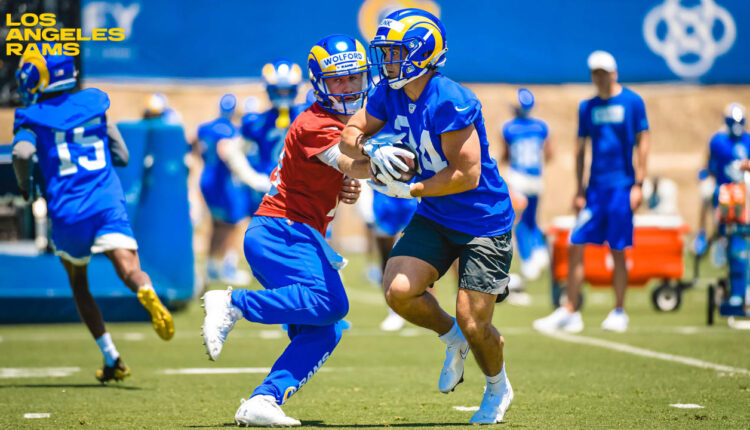 Jake would actually do it, though it was some time before he got a chance.

He appeared in all 25 possible games in his first and second seasons, but since he shared a backfield with a pair of future NFL running backs in Trey Edmunds and Ty Johnson, he was primarily a contributor to special teams.

Johnson was still on the roster in 2018, but a confidence boost from the spring training sessions in early 2018 gave Funk a good sense of what his junior season had in store.

“I really went into the season and thought I would contribute a lot more,” said Funk. “And then two years hit the risk of injury.”

The week after the season opener on September 1 against Texas at FedEx Field, a broken hand occurred for the first time in training. This injury healed in time for Funk to face Indiana on November 10, only to tear his cruciate ligament against Ohio State a week later.

Funk said in the Ohio State game he was running downfield on a kickoff when he felt his knee go around him. It wasn’t very painful – he could even jog off the field – but running and cutting on the sidelines didn’t feel right, even with a brace. He removed himself from the game instead of trying to play, and an MRI later confirmed a cracked ACL.

“Stay positive, stay focused,” according to his mother Alisa Funk, after the injury between Jake and his parents, the focus of the discussions.

“It’s a setback, but keep moving forward,” she told him.

The family were there to support him, be it his parents taking him to doctor’s appointments or his older brother Josh Funk who owns his own physical therapy practice – Rehab 2 Perform – in the DMV area and with Jake and Maryland’s athletic Training worked collaborators to get him healthy and fit for the 2019 season in six months – Locksley’s first head coach after serving on the Alabama team for the 2016-18 season.

At this point, in addition to those injuries, Jake had been fighting for positions for two years, but Locksley stopped him from considering the transfer portal and convinced Jake that he played a role.

In the third game of the Redshirt junior season 2019, however, he tore his cruciate ligament again on the same knee. Another bang in his knee, but “less than before,” he said.

Although it didn’t feel as bad as the first time, Jake said that something still felt weird. Tests and feedback from exercise coaches showed the ACL was still intact, but an MRI later revealed that Jake had partially ripped it, forcing him to make a critical decision.

“If you could play on it, we could put a bracket on it, you can play for the rest of the season,” Dr. Leigh Ann Curl, the senior orthopedic surgeon for the Baltimore Ravens who repaired Funk’s first ACL injury and would do it again, told him. “But if your ambition is to play at the next level, your knee wouldn’t pass medical protocols. So you’ll have to do it either now or later.”

So, Jake “bit the bullet,” as he put it, and decided to have the operation done in October. Season over, but it gave him more time for rehab.

However, a week after the operation, he had a knee infection that required him to receive an infusion plus antibiotics three times a day for a month. As he did so, he estimated he lost 20-25 pounds – from 205 to “about 180” – although he later put his weight back on.

By the time he was recovering from his second ACL injury, the COVID-19 outbreak had closed the programs’ remaining spring practices and facilities, forcing athletes to train at home. Similar to the initial injury, Jake worked with Josh on his rehab, with the two working with Maryland staff. Jake worked with Josh 5-6 days a week, with the occasional two-day workout, with a “nice, steady build-up” goal, Josh said.

“Especially when you look at the pandemic season, you could almost say, ‘Man, well, you’re going to worry that he won’t be doing as many reps on his legs and especially his knee,'” said Josh. “We went to great lengths to ensure that when he got to the University of Maryland and went back to training camp, there was little to no dropouts and little to no time to get used to the physical stress of practice- or position-specific exercises. “

Jake also did his part when not working with Josh, including conducting training sessions in a neighbor’s barn with rusty panels, dusty floors, and no air conditioning to compensate for the closure of Maryland’s facilities.

“From rehab to lifting to soccer-specific training, a whole new player has come back for the 2020 season,” said Jake. “My body composition changed completely, I lost about 5% body fat, ate healthier at home, just a completely different player.”

He was in great shape and ready to take on an important role as a Redshirt senior, but uncertainty still loomed over the impact of the COVID-19 pandemic on the 2020 season.