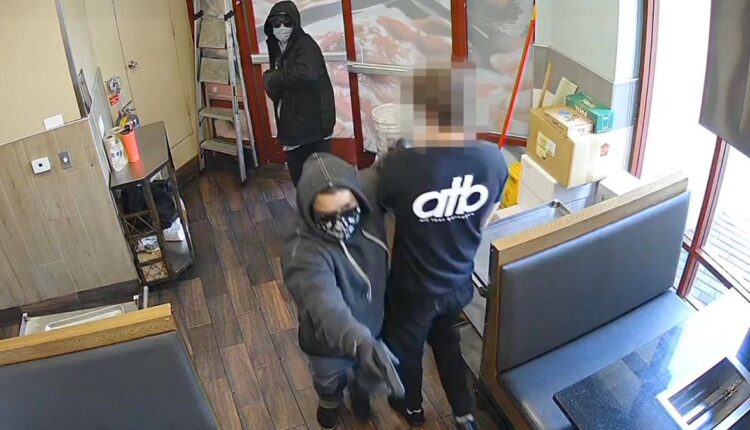 A multi-agency investigation led to the arrest of two masked suspects accused of ambushing a restaurant at gunpoint in a chilling robbery caught on camera.

Irvine Police released chilling video Thursday while announcing the arrests and sharing mug shots of the suspects accused of being behind the robbery.

The robbery took place at 11am on January 19th at All That Barbecue at 15333 Culver Dr. held in Irvine, police said.

Video shows the couple bursting through the back door with loaded handguns, grabbing an employee’s arm and leading all employees to a bathroom.

Police said while one suspect took employees’ wallets and cellphones, the other tried to get money from the restaurant safe and register.

Allan Hoang, 28, a Monterey Park resident, and Alanmichael Babauta, 25, a Westminster resident, were arrested in connection with the Jan. 20 robbery, police said.

“Barbauta and Hoang were arrested on robbery, kidnapping, burglary, false imprisonment and conspiracy charges. They are suspected of committing similar crimes across Orange County,” police said in a release.

Hoang, who police said was an employee at the barbecue area in 2017, was found with a silver semi-automatic pistol similar to the one used in the robbery and also allegedly had some of the employees’ stolen items with him.

When Babauta was taken into custody, he was allegedly driving a stolen vehicle.

Anyone with information regarding the investigation is asked to contact Detective Nate Ridlon at 949-724-7494.