Inside the 10 films nominated for best picture 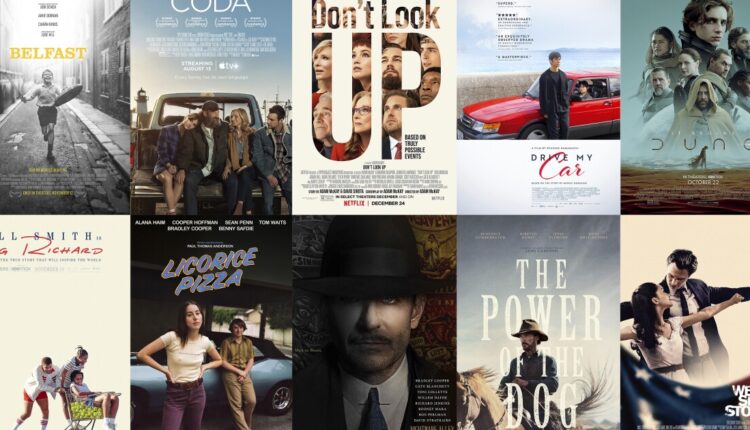 Ten films are up for the highly coveted best picture award at the 94th Academy Awards.

While no singular film has dominated awards season thus far, “The Power of the Dog” reigned supreme in terms of Oscar nominations with 12 in total. “Dune” is close behind with 10.

Read more about the best picture nominees ahead of Hollywood’s biggest night.

Director Kenneth Branagh’s “Belfast” is a coming-of-age story of a young boy named Buddy (Jude Hill) growing up in the titular Northern Ireland capital during a period of unrest in the country known as The Troubles.

Other nominations include best original song for Van Morrison’s “Down to Joy” and best sound.

“It was written from the heart and it seems to have touched the hearts of the people who’ve seen it,” Branagh told “GMA” when reacting to the film’s nominations.

Branagh called the film “a thank you and a tribute to my parents and to the people of Belfast at a time when that part of the world was suffering.”

He added, “Like the Irish in many situations, they found a way — painfully, but really meaningfully — to find the joy and the happiness wherever they could in these difficult situations.”

The Sian Heder-directed drama focuses on a 17-year-old girl, Ruby (Emilia Jones), who is a CODA (child of deaf adults) and the only hearing member of her family. Ruby’s father, played by Troy Kotsur; her brother, played by Daniel Durant; and her mother, played by Marlee Matlin, depend on her to communicate with the community, especially when it comes to running their fishing business.

After signing up for choir at school, Ruby discovers she would like to explore her passion for singing, which her family struggles to grasp, as they need her as their interpreter.

With the trio of deaf actors leading the cast — Kotsur, Durant and Matlin — the film makes overdue strides in representation. Many of the struggles the characters face highlight the plight the deaf community endures and the lack of acceptance and understanding they are often met with.

The satirical film, nominated for four Academy Awards, also stars Meryl Streep as President Orlean, who prioritizes misinformation and her own personal gain over the good of the nation, and Jonah Hill as her doting and incompetent son/chief of staff, who refuses to take the astronomers’ message seriously.

The film’s metaphor on climate change, as well as the portrayal of the inept media and society’s general inaction to pay attention or make any actionable changes, has garnered various responses and provoked cultural conversations across social media.

Along with its best picture nomination, the film is also up for best original screenplay, best film editing and best score at the 94th Academy Awards.

“Drive My Car,” from director Ryûsuke Hamaguchi, is a Japanese film that follows a man named Yūsuke Kafuku (Hidetoshi Nishijima) who befriends his driver, Misaki Watari (Tōko Miura), as he processes his grief over the death of his wife.

In addition to best picture, the film is up for best director, best adapted screenplay and best international feature film.

Hamaguchi told ABC News he was “most surprised” that he and the film were nominated for multiple awards and that he believes audiences connected with it because it’s “a story about what it means to keep on living.”

“Drive My Car” is the first Japanese film to be nominated for best picture.

Critic Peter Travers said “Drive My Car” is “the best movie you never heard of” in his review. He called the film a “flat-out masterpiece that manages to be enthralling from first scene to last” — which is saying something considering its three-hour runtime.

Denis Villeneuve’s “Dune” follows the story of Paul Atreides (Timothée Chalamet) who travels to the far-flung planet of Arrakis, where the coveted spice melange is located, and finds both wonder and danger in the harsh desert landscape.

Starring alongside Chalamet are Rebecca Ferguson as his mother, Lady Jessica; Oscar Isaac as his father, Duke Leto; Stellan Skarsgård as the villainous Baron of House Harkonnen, enemy of House Atreides; and Zendaya, as a mysterious Fremen woman named Chani, among others.

Chalamet told “GMA” that shooting “Dune” was a “truly special” experience for him. He spoke about how the film was “shot entirely on location” in the desert in places like Jordan and the United Arab Emirates. He also said the movie was “made for theaters” and that it “shakes the theater.”

Zendaya, whose character will have a larger role in the confirmed sequel, called filming the movie “one of the coolest experiences” of her life.

“This is such a beautiful story and it’s really only part one,” she told “GMA,” adding that she feels there is “so much more to explore with these characters, with this world.”

Will Smith leads this drama about Venus and Serena Williams’ journey to tennis superstardom, playing their father, Richard Williams, who plotted their path to success.

The film, from director Reinaldo Marcus Green, has the sisters’ stamp of approval, and they acted as executive producers for the project.

Smith, who is up for best actor for his portrayal of Richard Williams, has already taken home several awards for his performance; he won best actor at the 2022 SAG Awards and the 2022 Golden Globes, as well as outstanding actor in a motion picture at the 53rd Annual NAACP Image Awards.

Director Paul Thomas Anderson teleports viewers to the San Fernando Valley in the ‘70s in this unconventional, coming-of-age love story.

The two hit it off after meeting at Gary’s school picture day — Alana is the photographer’s assistant — and build a friendship. Gary is immediately taken with Alana and as she eventually grows to appreciate Gary’s confidence and mature persona, their bond strengthens. The two go on to team up on various business ventures and have some wild adventures together.

In addition to its best picture nomination, the film is also up for best original screenplay and Anderson nabbed a nomination for best director.

Guillermo del Toro’s latest film, “Nightmare Alley,” is set in the 1940s and follows the story of a man named Stan (Bradley Cooper), who learns mentalism while working at a circus and later uses that skill to con the wrong people with the help of a psychiatrist (Cate Blanchett).

The film, which is based on the 1946 novel of the same name by William Lindsay Gresham, is up for four total Oscars: best picture, best cinematography, best costume design and best production design.

“It’s a beautiful allegory,” she said. “It’s got all those kinds of joys and thrills of a noir, but it’s really contemporary.”

Blanchett also said it was a “big stretch” for Cooper to play this part because of how different he is from Stan.

“[Bradley is] warm and charismatic as a person and his character is so devoid of any moral compass and he’s somebody who turns lying into a money-making enterprise until he gets beaten at his own game, whereas Bradley is all about truth and kindness,” she said.

As for working with del Toro, whose 2017 film “The Shape of Water” won for best picture and best director, Blanchett called him a “once-in-a-lifetime human being.”

“While some of the worlds that he creates are grotesque and nightmarish and dark … he really holds the hand not only of the actors but of the audience,” she said of the Mexican filmmaker. “He’s such a great person to go through the sort of the horror tunnel with.”

“The Power of the Dog”

“The Power of the Dog,” from director Jane Campion, is set in 1925 and is about a rancher named Phil Burbank (Benedict Cumberbatch) and his brother George (Jesse Plemons). After George marries Rose (Kirsten Dunst), Phil makes life difficult for her and her son, Peter (Kodi Smit-McPhee).

Dunst referred to the film — which is based on Thomas Savage’s 1967 novel of the same name — as “a Western with no guns” and said it “feels old-fashioned and fresh at the same time” in an interview with “GMA.”

The actress lauded Campion as a “masterful” director and one she has wanted to work with since seeing her 1993 film “The Piano.”

Dunst called her own nomination “something I’ve always dreamed of” and said she is proud to be nominated alongside Plemons, her fiancé with whom she shares two children, calling it “a beautiful thing for our family.”

“I just feel very lucky to be a part of this movie,” Dunst added, “and that this movie is being honored and accepted the way it has been and celebrated.”

Director Steven Spielberg’s version of the classic musical is also a contender in the best picture race.

Spielberg’s adaptation stars Ansel Elgort and newcomer Rachel Zegler as the famous star-crossed lovers, Tony and Maria, who come from different backgrounds and have attachments to rival gangs, the Jets and the Sharks.

The renowned director previously told ABC News, “This is a story I really believe is worth bringing back to the current generations.”

This is the second feature-length adaptation of the famous 1957 Broadway musical. The first, directed by Jerome Robbins and Robert Wise, was released in 1961 and famously starred Natalie Wood, Rita Moreno, Richard Beymer, Russ Tamblyn and George Chakiris.

The film was nominated for 11 Academy Awards and won 10 of those awards, including best picture, in 1962.

Spielberg described that version of the classic tale as a “masterpiece,” but said they “never attempted to remake the ’61 film,” when creating the 2021 version. “We took all of our inspiration, and everything based on the original source material, which was the 1957 Broadway musical,” he said.

ABC15 is your home for the 94th annual Academy Awards this Sunday starting at 5 p.m.

The Sports Report: Nothing easy about Saint Peter’s miracle run