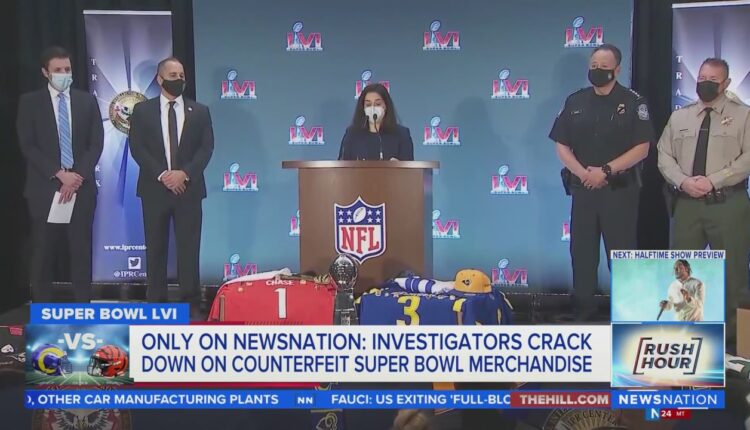 by: Sean Noone, Nancy Loo

LOS ANGELES (NewsNation Now) — A crackdown on counterfeit goods is part of law enforcement’s plan for every Super Bowl. This year, with a bigger host city, it’s a much bigger job than usual.

Randall Hill knows which merchandise is legitimate. The former NFL player is now a special agent for US Homeland Security Investigations, or HSI.

Thrown for a loss: Super Bowl staples will cost more this year

Counterfeits frequently surface right after the Super Bowl is set.

“As soon as the teams are decided, that’s when some of these vendors start ramping up with their products,” Hill said.

With the Super Bowl happening in the home city of the Los Angeles Rams, demand for fan gear is especially high.

On one operation, Intel brought NewsNation to the San Fernando Valley, where a small street stand was loaded with counterfeit Super Bowl items. Within the haul were counterfeit clothes featuring other popular franchises. Nearby, there was also a carload of counterfeits.

In a news conference, the NFL and law enforcement agencies highlighted the problem and the many ongoing operations such as what we saw in the valley.

Agents said operations are like whack-a-mole, with more new stands sure to pop up before Sunday’s game.

In the San Fernando Valley case, about $10,000 worth of illegal items were hauled away and the vendor was warned; suppliers and the money trail are the bigger targets.

The counterfeiting problem is so widespread, officials estimate confiscations likely bring in less than 5% of the total.