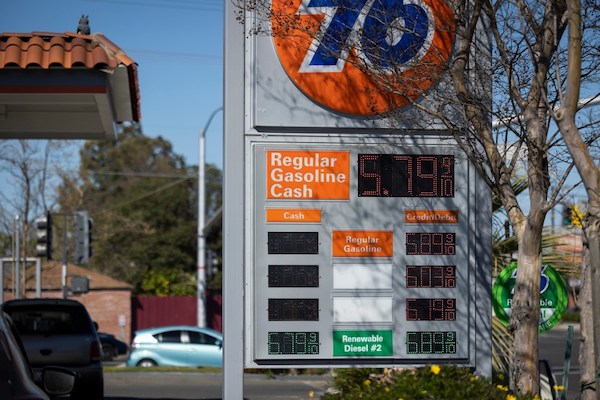 CalMatters is dedicated to explaining how state government impacts our lives. Your support helps us produce journalism that makes a difference. Donate now.

A 76 gas station in Sacramento on March 10, 2022. Photo by Miguel Gutierrez Jr., CalMatters

California’s economic recovery from the devastations of the pandemic was stronger than previously estimated — but skyrocketing inflation could rob the state of its hard-earned gains.

Those were the main takeaways from a Friday report from the state Employment Development Department, which pinpointed California’s January unemployment rate at 5.8% — the same as its December rate, which was revised down from 6.5% due to updated figures showing sizable job gains that month. Other key takeaways:

But there’s still a long way to go: California tied with Nevada for the nation’s highest unemployment rate in December, the last month for which federal statistics are available. The Golden State’s civilian labor force is still down by 452,000 workers compared to pre-pandemic levels, according to Michael Bernick, a former EDD director and attorney at Duane Morris. And inflation rose 7.9% nationwide in the yearlong period that ended in February, the U.S. Bureau of Labor Statistics reported last week — the highest rate in 40 years.

Today, Republican state lawmakers are expected to force a vote on a bill to eliminate California’s 51-cent gas excise tax for six months — one of several ideas Newsom and legislators have proposed to help people hurting at the pump. (Another bill, introduced Friday by Democratic state Sen. Ben Allen of Santa Monica, would require oil refiners to disclose their profit margins on each barrel of gasoline sold.)

California has administered 72,110,744 vaccine doses, and 74.1% of eligible Californians are fully vaccinated.

Other stories you should know

Students sit on the lawn at UC Berkeley on March 12, 2020. Photo by Anne Wernikoff for CalMatters

As soon as today, state lawmakers could send bills to Newsom’s desk that would allow UC Berkeley to avoid a court order to cap its in-person enrollment for the upcoming academic year — the result of a package of proposals introduced Friday that, if signed by the governor, would take effect immediately and apply retroactively. The bills would:

In other higher-education news: The California State University system since 2015 has paid more than $4 million in salary and benefits to 11 former top officials as part of an executive transition program — but there are no records showing how many hours they worked or what they did, a Los Angeles Times investigation found. Among those participating: former CSU Chancellor Joseph Castro, who recently resigned amid criticism that he mishandled sexual assault and workplace intimidation allegations against a colleague while president of Fresno State University.

Today, many California schools and child care centers will permit kids to forgo masks for the first time in two years — but the pandemic’s political and educational reverberations are from over. Here’s a look at a few key fronts:

A Los Angeles police officer stands watch outside of City Hall on May 1, 2020. Photo via iStock

As elected officials continue to debate the best way to address voter concerns about rising crime — even as statistics paint a more complicated picture — law enforcement agencies across California are confronting challenges that they say could hamper their ability to improve public safety, including:

Proposal would harm working class musicians: Lawmakers are considering a bill to rewrite the rules for recording contracts, which could destroy California’s creative legacy and stack the deck against new acts and voices, argues Mike Montgomery, executive director of CALinnovates.

Abandon arcane foster care policy: Many California parents have to pay for their children’s stay in foster care, but evidence shows the law should be repealed, writes Jill Duerr Berrick, a distinguished professor of social welfare at UC Berkeley.

Other things worth your time

How liberal is California? The answer matters to Democrats everywhere. // New York Times

The housing crisis is pushing both Bay Area landlords and tenants to the financial brink. // San Francisco Chronicle

Ships are killing whales off the California coast. Here’s what experts say will save them. // San Francisco Chronicle

Listen: An Unsettling Investigation Into the Closure of a Chain of Pain Clinics