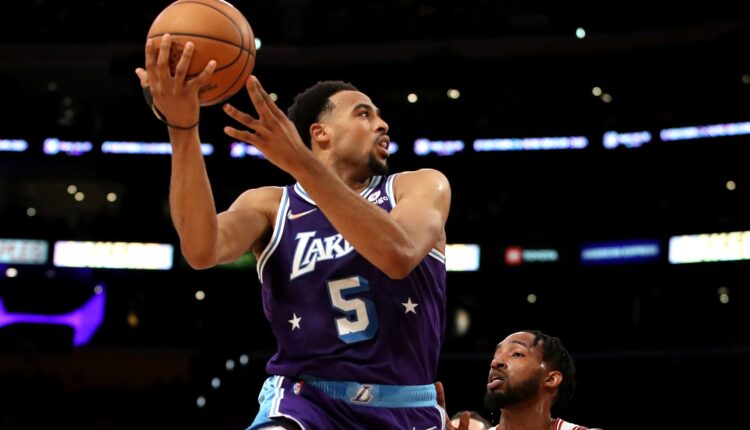 As the NBA transaction season officially kicked in with the 2022 draft, a name that will frequently surface in trade rumors for the Los Angeles Lakers, and as a matter of fact already has, is that of third-year guard Talen Horton-Tucker.

After sacrificing fan-favorite Alex Caruso in order to secure Tucker to a three-year $30 million contract the past offseason, the Lakers subsequently tried to trade him multiple times throughout the season.

The young guard did not exactly live up to the promise shown in his second season in the NBA that secured him the three-year contract, hence he was consistently involved in trade rumors, included in several trade packages LA shopped throughout the league.

Spending the first 13 games out due to a thumb injury, THT returned to action in 2021 with early great success, averaging 23.3 points, 7.3 rebounds and 1.3 steals on 40% from three through his first three games. Since then, his production and impact dipped, arguably regressing to his sophomore season level.

The Lakers organization and fanbase have been understandably disappointed by Horton-Tucker’s regression and many have been clamoring to get him traded.

The blame for Lakers’ Talen-Horton Tucker is not on him.

THT has been part of a team with constant chemistry and fit issues. Due to injuries, the Lakers have struggled to find an identity throughout the whole season, and so the young kid has had to adapt to all the changes and different attempts made by the coaching staff throughout the year, almost playing a different role every night. The same issue Russell Westbrook lamented.

The difference is that for a superstar this means a decrease in production yet still a sizable impact on the game, whereas for a young player looking to find his niche and his footing in the league it means trying to keep up with the team system offering his support to the core players. Consequently, a reduction in patterns and sweet spots to consistently build his game and production on.

It is no coincidence that in THT’s first three games of the season, the most productive, LeBron James was out for injuries. As soon as James returned to the court, THT’s production had a drastic drop, falling to five points per game in the following five games. Having to immediately adjust to a new role, he eventually managed to reemerge and settle on a decent contribution.

And this went on the whole season, with James and Anthony Davis on and off the lineup, tens of different lineups and combinations, Westbrook’s infinite shifts — all while the team struggled to find a balance that was never achieved.

Horton-Tucker had his moments but never really showed a fulfilling of the potential that had excited the Lakers from the bubble on.

But again, it is no coincidence that as soon as the Lakers were shamelessly eliminated from the play-in contention and the big three were shut down for the remainder of the season, the 21-year-old had a 40-point game against the best defense of the NBA.

In those final three starless games of the season, he averaged 21.7 points and 2 steals, including a 10-point performance in just 13 minutes against the Denver Nuggets before he was forced to leave the game early in the second quarter for an ankle injury.

Are we really sure we want to give up on the young lad so soon? The kid will still be 21 years old when the 2022-23 season starts. The potential is still right there and although people seem to ignore it, he still showed flashes this year. He is still really young and promising.

What Horton-Tucker really needs is a definite role in a structured system that helps exploit his strengths instead of exclusively putting him in the service of and deferring to his teammates, while expecting him to provide great performances.

With Westbrook in the final year of his contract and LeBron James soon turning 38, the Lakers should hold onto young players like THT and Austin Reaves (who had himself a big game in the season finale with an astounding triple-double), looking at the future of the franchise.

Talen Horton-Tucker still deserves a chance to show what he is really able to do in a Lakers uniform.