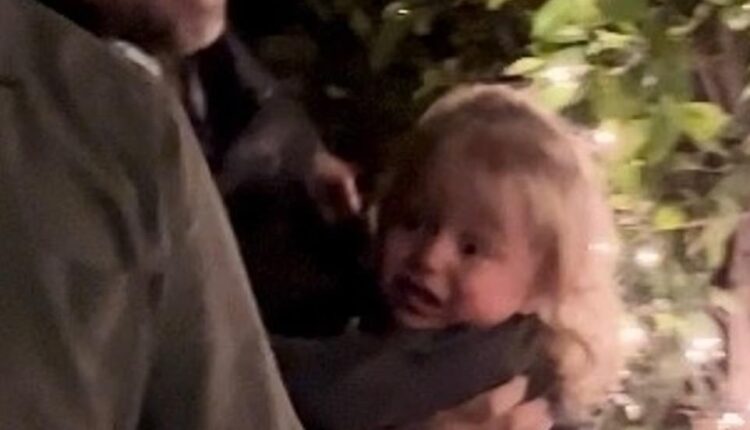 Hunter Biden has been seen smiling with his family as they left a celebrity restaurant in California.

The President’s son was pictured leaving the Giorgio Baldi restaurant in Santa Monica with his wife Melissa and their young son Beau on Wednesday night.

It came less than a week after Melissa was seen soaking up the sun in a red bikini while enjoying a beach day with friends in Brazil.

The South African activist, 35, was spotted frolicking in the ocean and sipping on a coconut drink on the sand with two male pals during the afternoon outing in Rio de Janeiro.

The family trip to Giorgio Baldi came the same day the Washington Post confirmed the authenticity of his laptop which showed his foreign business dealings – nine months after first receiving a copy and a full year after DailyMail.com authenticated it.

The Post had cyber forensics experts validate material on the abandoned laptop hard drive, using similar methods that experts hired by DailyMail.com used back in March 2021.

After months of publishing articles suggesting the laptop could be Russian disinformation, the analysis published by the Post on Wednesday marks a startling U-turn.

Its admission also follows the New York Times, which quietly noted 1,200 words into a long story published earlier this month that it had also validated material from the laptop.

The laptop has been at the center of controversy surrounding the Biden family, with files found on Biden’s personal computer including emails showing dodgy business dealings between the President’s son and foreign officials.

Hunter Biden has been seen laughing with his family as they left the celebrity restaurant Giorgio Baldi in California on Wednesday night, just hours after The Washington Post finally admitted his laptop showing his foreign business dealings is real 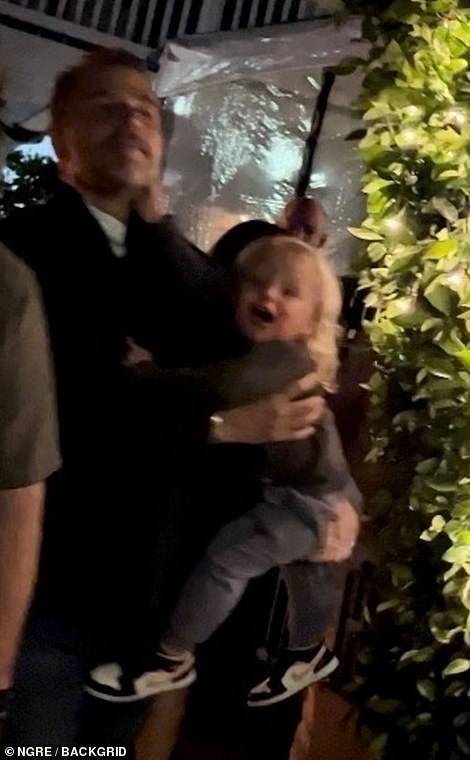 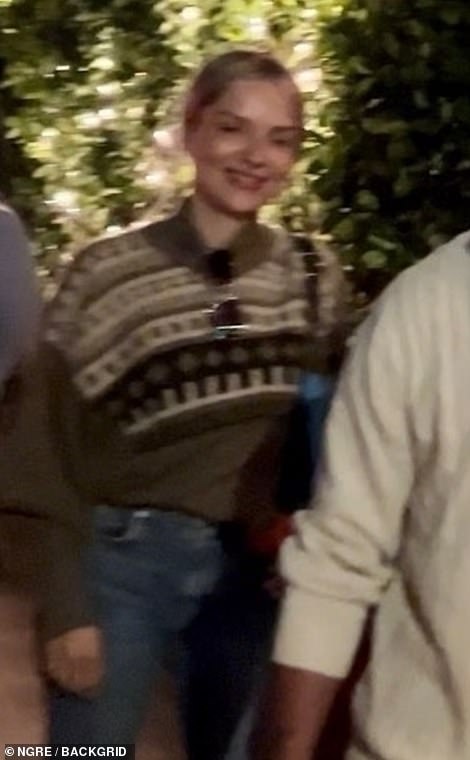 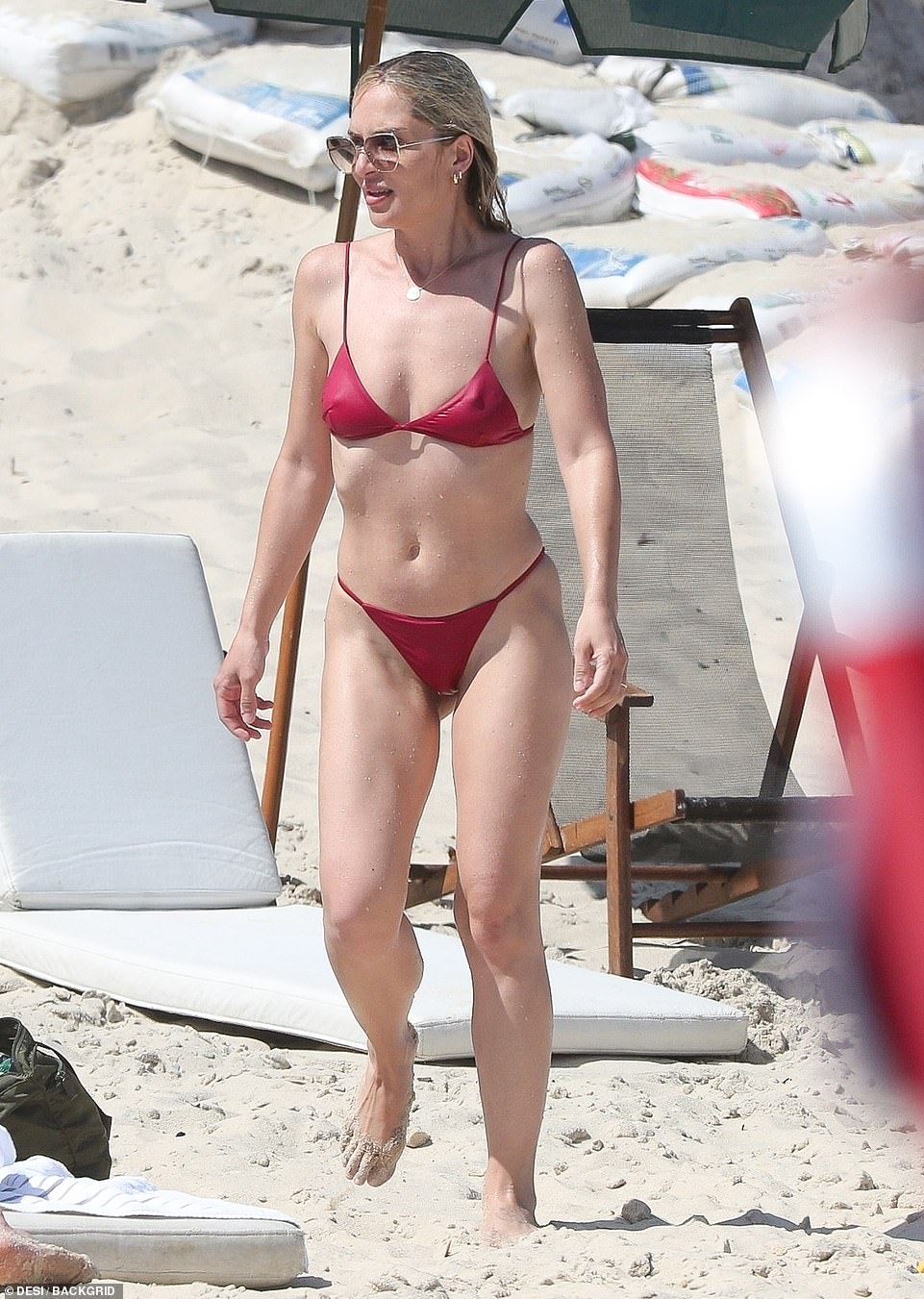 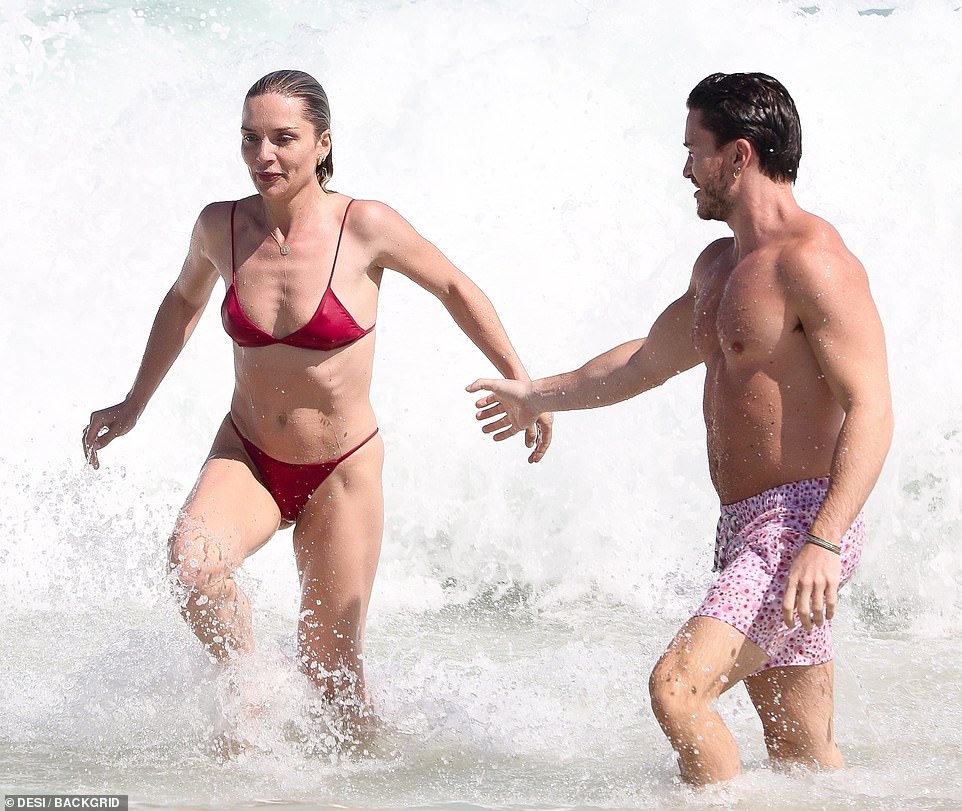 Cohen was joined by two male friends during the trip to Brazil, days before enjoying a night out with Hunter and their child 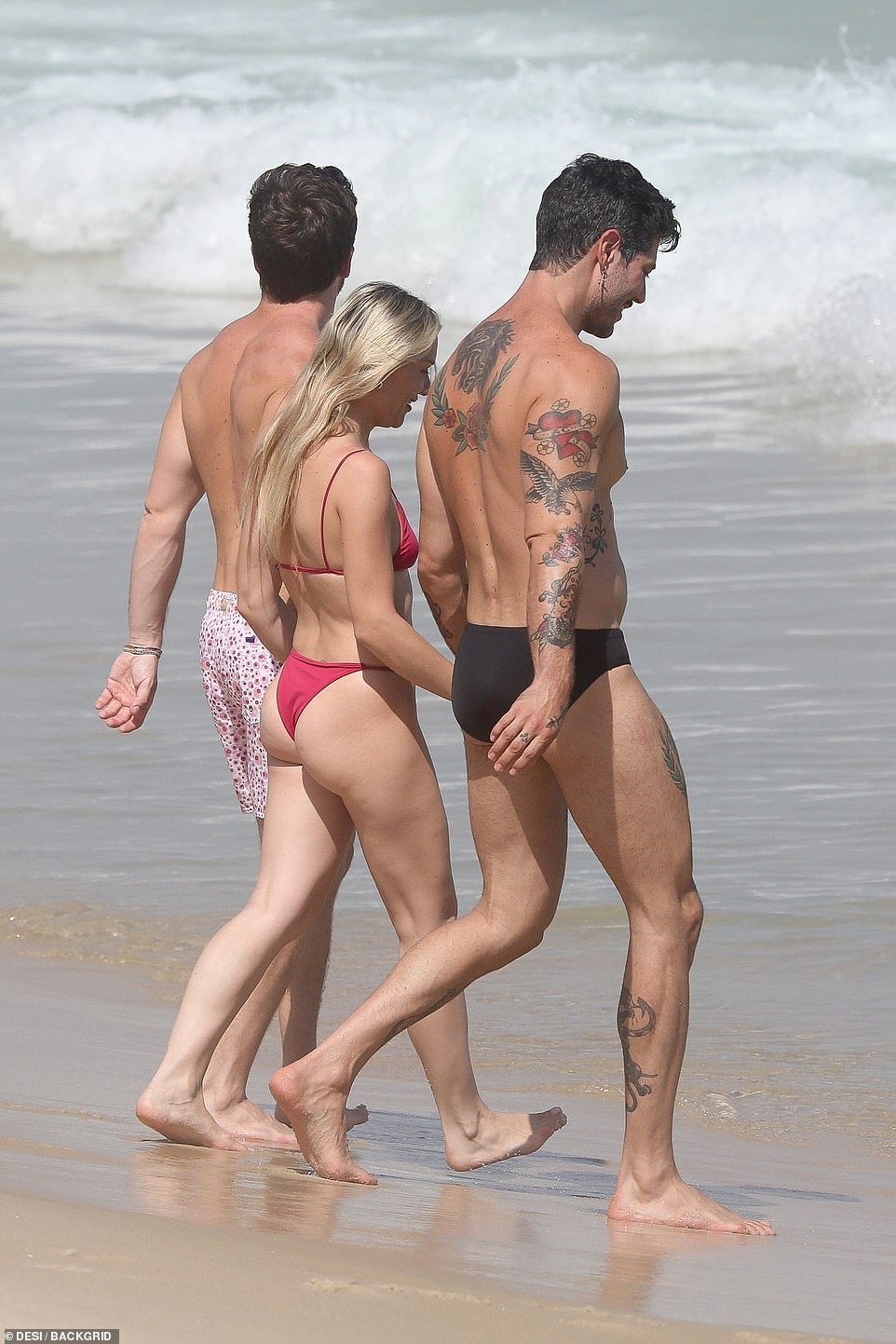 Files revealed Biden has had business dealings with the state-controlled Chinese energy company CEFC and even made keys for his family – including Joe and Jill Biden – to use at his office.

But The Post spent months ignoring stories arising from the laptop and prominently reporting claims that it was ‘Russian disinformation’.

‘It’s clear the corporate media was complicit in helping Joe Biden get elected by suppressing what they knew would be damaging stories. They covered up for him in 2020 and continue to cover up for him now,’ Johnson said in a statement to DailyMail.com.

‘But facts are stubborn things. As the Bidens, the Democrats, and the media are learning, it is difficult to keep them hidden forever.’

‘The Washington Post story should be viewed as what Nixon’s advisers once termed, a “modified limited hangout,”‘ Johnson continued.

The term means when one concedes a little, but stonewalls on the rest.

‘Senator Grassley and I will continue to investigate the Biden family’s foreign financial entanglements and provide the American people with the truth to the best of our abilities,’ Johnson added.

The New York Post broke the story of the laptop’s contents of the first of three ‘misplaced’ laptops belonging to Biden in October 2020, which came into computer repairman John Paul Mac Isaac’s possession after an ‘inebriated’ Biden brought it in for repairs to his Delaware shop in April 2019 and never picked it back up. 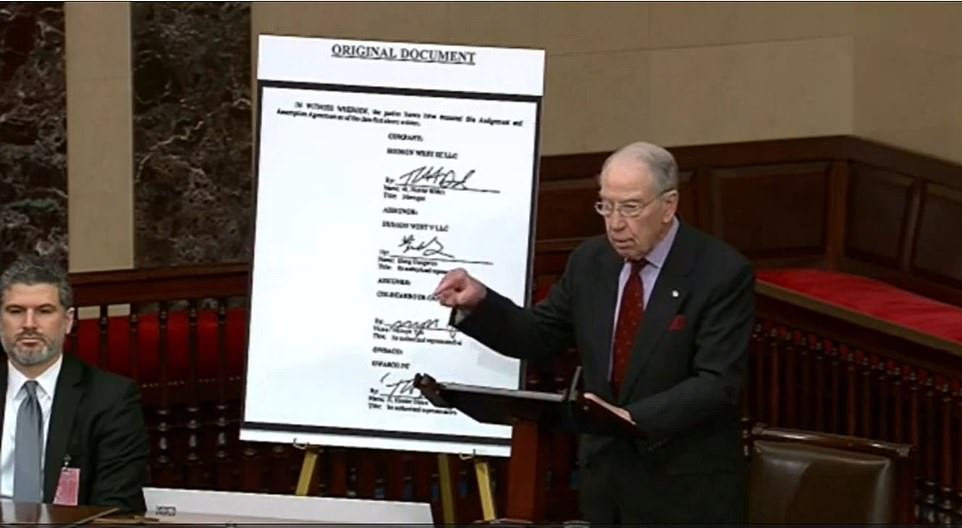 Republican Senators Chuck Grassley and Ron Johnson promised on Wednesday to keep investigating the Biden’s family’s foreign entanglements and accused media organization of suppressing damaging stories about the President’s son. Pictured: Grassley on the senate floor on Wednesday revealing receipts that claim financial dealings between Hunter Biden and a firm tied to the Chinese government

Files found in Biden’s personal computer included emails showing shady business dealings by the current US president’s son with foreign officials, and texts that showed him repeatedly using the ‘N-word’ and accidentally overpaying a prostitute $25,000 from an account linked to his dad.

It also uncovered a 2015 effort by Biden to set up a meeting between Vadym Pozharskyi, an adviser at a Ukrainian energy firm, and his father, then-vice President Joe Biden, and other instances of the scion looking to cash in on his family connections.

In its Wednesday piece, the Washington Post claimed it tried to get hold of a copy of the laptop’s hard drive in October 2020 but failed, and didn’t get its hands on the laptop drive until June 2021, when Jack Maxey gave them a copy.

Maxey, a former co-host of ex-Donald Trump advisor Steve Bannon’s podcast the War Room, also gave DailyMail.com a copy in February last year – and has been doggedly trying to get the US’s two most prestigious papers to investigate its contents ever since.

The Post accidentally deleted their first copy and had to get Maxey to fly out to their Washington DC office with a new one in October last year, he said.

‘I’m not going to disclose the details of our conversations, but I gave them a copy of it in June. I personally delivered it to their offices and met with senior editors,’ Maxey told DailyMail.com.

‘I had to go a second time in October because they broke the first copy.

‘They haven’t done anything [until now]. They’re not just late to the party, they didn’t even show up.’

Photos provided by Maxey show him at the newspaper’s offices, and a copy of the laptop hard drive lying on the Post’s boardroom table. 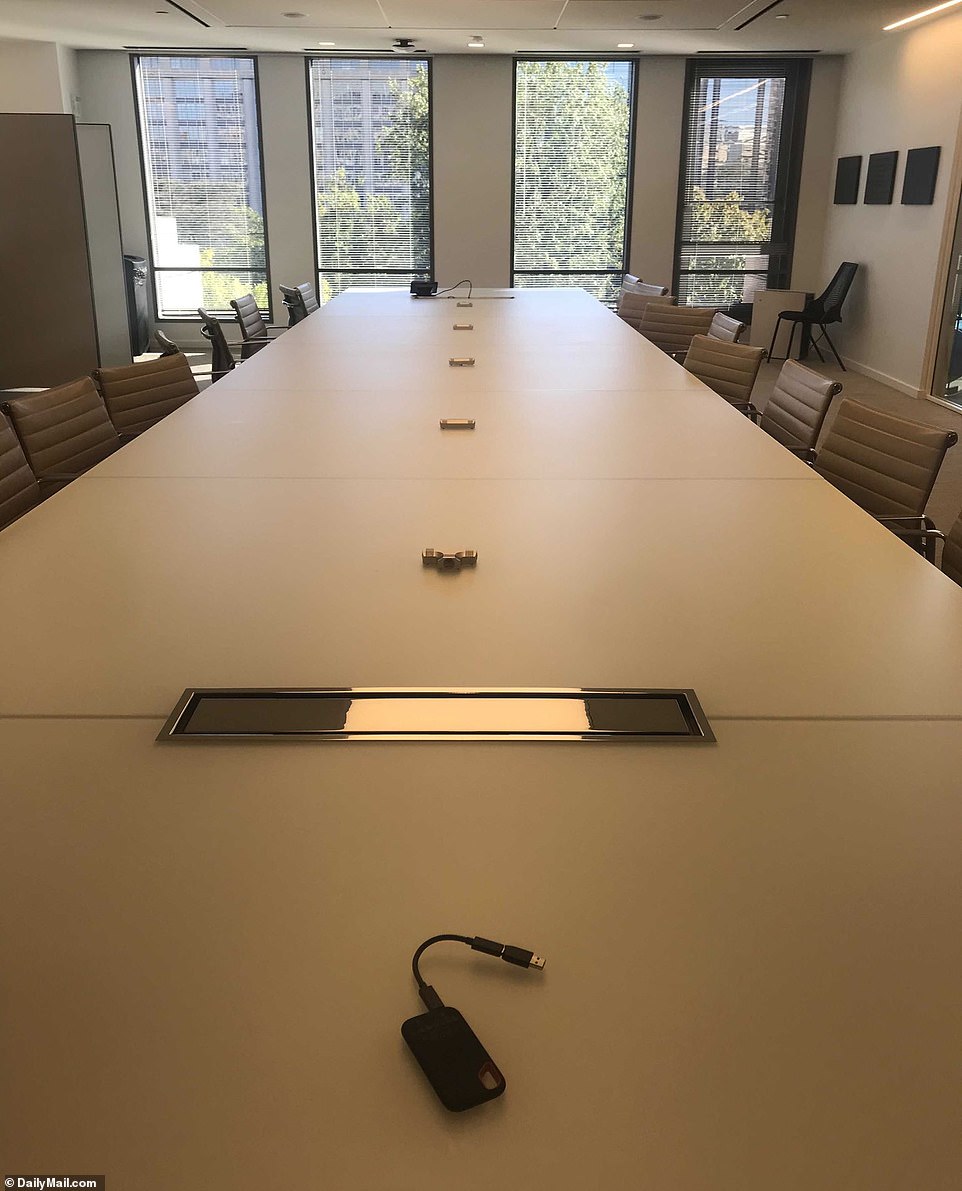 Photos provided by Maxey show him at the newspaper’s offices last October, and a copy of the laptop hard drive lying on the Post’s boardroom table 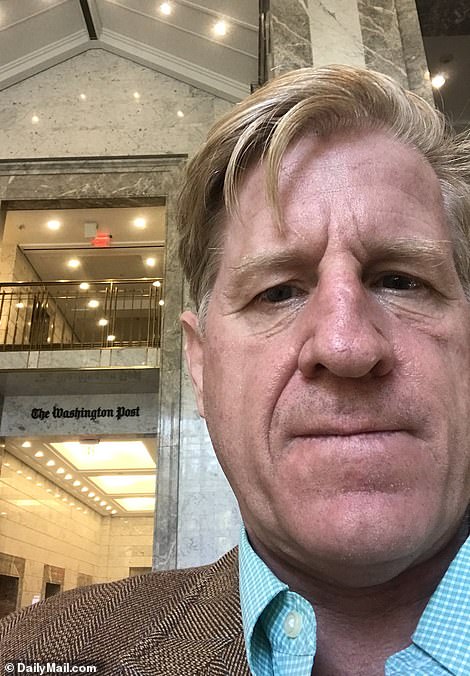 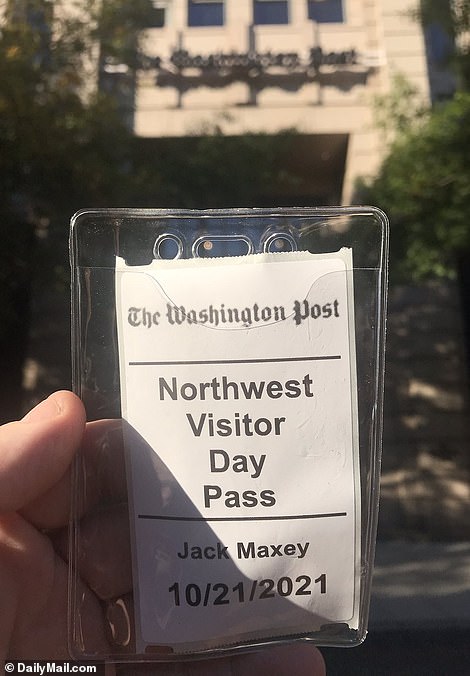 But the Post dismissed the hard drive as ‘Russian disinformation’ and an ‘explainer’ piece published in October 2020 played down major revelations including that Joe Biden met with Hunter’s business partners, but has since been updated to reflect the paper’s new position – admitting that at least some of the material on the laptop is real.

A story based on the laptop’s contents published by the newspaper on Wednesday focuses on the millions of dollars Hunter and his uncle, Joe Biden’s brother Jim, received from their partnership with a Chinese government-linked oil behemoth CEFC.

The story, which has been previously reported by DailyMail.com and others, includes documents showing Hunter was paid a $1million retainer in 2017 to represent his business partner Patrick Ho, who was being prosecuted by the US government.

One startling email among those now validated by the Post indicates the president could have been involved in Hunter’s business dealings with the Chinese.

In September 2017 Hunter was planning to open a new office for his multi-million-dollar joint venture with CEFC at the House of Sweden, a Georgetown building home to the Swedish embassy.

‘I would like the office sign ton [sic] reflect the following: The Biden Foundation, Hudson West (CEFC US).’

‘We are very excited and honored to welcome your new colleagues!’ the manager replied.

Biden Foundation board member Jeffrey Peck told the Post: ‘There was never any thought — like zero thought or consideration — given to that building.’

The House of Sweden said they made the keys but Hunter never picked them up.

The Post’s admission, hot on the heels of that of the New York Times, coincides with an apparent growing momentum in Hunter’s federal prosecution over reported tax fraud, money laundering and illegal foreign lobbying allegations.

The New York Times reported that material from the laptop is part of the FBI’s evidence in the case.

Hunter abandoned his laptop at a Delaware computer store in 2019. John Paul Mac Isaac, the store owner, gave a copy of its hard drive to Donald Trump’s lawyer Rudy Giuliani in September 2020, after handing over the original to the FBI the previous year.

Giuliani reportedly leaked documents and photos from the drive to the New York Post, and also gave a whole copy of the drive to Bannon and his podcast co-host Maxey.

The New York Post published excerpts of emails and photos from the laptop ahead of the 2020 election, but without authentication they were widely dismissed as fake or ‘Russian disinformation’.

In spring last year DailyMail.com hired Brad Maryman, an expert who founded the FBI’s cyber forensics unit, and his firm Maryman & Associates to analyze the laptop.

Their report showed the laptop was real. From then on, DailyMail.com began to reveal its sordid and potentially incriminating contents over the following year.

Using the same forensic tools as federal and state law enforcement in criminal investigations, Maryman & Associates found a total of 103,000 text messages, 154,000 emails and more than 2,000 photos on the hard drive.

The firm’s founder, Brad Maryman, was a 29-year veteran of the FBI, served as a Chief Information Security Officer and founded the bureau’s cyber forensics unit. His partner, Dr. Joseph Greenfield, is an associate professor at the University of Southern California and helped write their degree program in intelligence and cyber operations.

After an extensive analysis of the hard drive, Greenfield and Maryman produced a report for DailyMail.com detailing their findings.

Using the same forensic tools as federal and state law enforcement in criminal investigations, they found a total of 103,000 text messages, 154,000 emails and more than 2,000 photos.

– They found emails for multiple accounts on the laptop dating back to 2009, and other data which ‘appears to be related to Mr. Biden’ between 2016 and 2019.

– The report’s findings were consistent with the known timeline for the hard drive. A Wilmington, Delaware computer store work order with Hunter’s signature shows he left his 2017 MacBook Pro laptop there on April 12, 2019.

– Hunter’s iCloud email address was added to the laptop’s system on October 21 2018, as well as his work email at his firm Rosemont Seneca on February 2 2019.

– The same day, a Gmail address he used to log onto sex cam sites, and another personal Gmail address belonging to Hunter, were also added.

– Emails addressed to Hunter’s various email addresses dating from December 2009 to December 2020 were found on the system.

– An iPad with the name ‘Hunter’s iPad’ and three email addresses associated with the Biden family was backed up on the laptop and on iCloud in January 2019 and again a month later.

– Greenfield found 818 call logs in this iPad backup with timestamps from June 2016 to February 2019.

– In February 2019 an iPhone XS was also synced with the laptop. Its serial number was consistent with the timestamps of the data on the phone.

In conclusion, ‘The operating system timestamps appear to be authentic, and no evidence was found to suggest that the timestamps or data were altered or manufactured,’ the report said. ‘No indications were found that would suggest the data was manufactured.’

Two Midwest Transplants Get a ‘Price Shock’ in Southern California. Which Home Would You Choose?

Despite Doctors’ Concerns, Pharmacists Get More Leeway to Offer Treatment With Testing