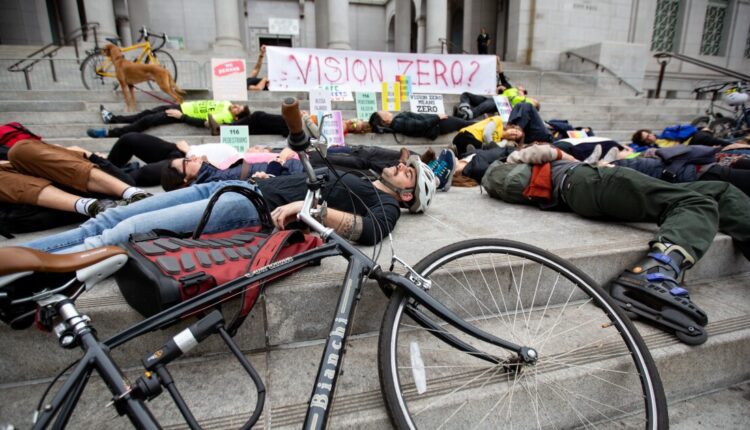 Mayor Eric Garcetti’s goal of ending the road death toll by 2025 seems increasingly unattainable after another year of rising deaths and injuries from motorists.

City streets are becoming increasingly dangerous, especially for pedestrians, with 486 seriously injured by motorists – a 35% increase from 2020. Pedestrian deaths rose 6% to 128.

The numbers frustrate transport advocates, who have long argued that Vision Zero – a program to end road deaths unveiled by Garcetti in 2015 – is underfunded and given low priority by the mayor and city hall leaders.

“We’re still a long way from there,” said John Yi, executive director of Los Angeles Walks, of the goal of zero deaths. “This is a city-level leadership failure.”

While the data for 2021 is still being analyzed, according to the Department of Transportation, residents of the underserved communities of LA are disproportionately killed in traffic accidents.

LAPD chief Michel Moore highlighted the violence on the streets at a police commission meeting last month in which he urged the public to comply with speeding laws and cited the increasing number of clashes.

“We saw these dramatic increases,” Moore told the panel, drawing attention to the recent death of several pedestrians, including Arian Rahbar, a 21-year-old USC student who was hit by a driver in South LA, and an 85-year-old Reseda man killed by a driver. The LA County Medical Examiner identified the victim as Parviz Behna.

Transportation Department spokesman Colin Sweeney said the 2021 stats point to “fast and reckless driving coupled with design trends that are making cars deadlier than ever, with heavier frames and added distracting features.” He said the data would be analyzed for certain trends.

Los Angeles is far from alone with a surge in road deaths. Nationwide, according to preliminary figures from the federal government, there was an 18 percent increase in road deaths in the first half of 2021. Transport Minister Pete Buttigieg called the trend in October a “crisis” that was also “avoidable”.

The statewide uptrend followed decades of safety gains, and the surge in death toll suggests the pandemic has made US drivers more reckless – more likely to drive too fast, drink or do drugs, and keep their seat belts open.

LA’s pre-pandemic numbers show that the total death toll from traffic collisions remained unchanged from 2017 to 2019, after falling slightly from 2016 numbers, according to the Department of Transportation. The number of pedestrians killed increased or remained the same during this period, according to the ministry.

Before the pandemic, clashes with cyclists increased, resulting in serious injuries. The numbers rose again in 2021, up 24% by December 25, compared to the same period in 2020. And 18 cyclists were killed, an increase of 20%.

Citing cellphone distraction as a cause of collisions, Garcetti said the city added bike lanes during the pandemic, investigated the city’s most dangerous intersections to find solutions, and supported a new state law to help cities gain more control about speed to have limits.

“But it shows how difficult it is,” said Garcetti on Thursday.

He turned down criticism for not mentioning Vision Zero as often as he is touting other initiatives. “I speak all the time,” said Garcetti. “I do panels, I go out internationally to be part of this movement to make sure we have more accessible, livable cities.”

The mayor started the Vision Zero program in 2015 but failed to hit his first benchmark – reducing road deaths by 20% by 2017. Vision Zero is based on the principle that road deaths are avoided through technical measures, enforcement, education, and evaluation can commitment to the community.

Sweeney, the Department of Transportation spokesman, said the city has implemented thousands of road safety measures in areas known to be prone to collision, including crosswalks, road signs, island escape routes, and more. Important improvements were also recently made to Avalon and Adams Boulevards, he said.

“Every road death is a tragedy, and this year’s deaths are a sobering reminder of how important our work is,” said Sweeney.

Some traffic measures have been rejected by companies and local residents. Councilor Mike Bonin, chairman of the city’s Transportation Committee, faced a threat to recall in 2017 from residents angry that a Playa del Rey “street diet” – an initiative that removed lanes and added bike lanes – had increased their commute times. The car tracks were later restored.

“We need more funding, more staff and more advocacy to better protect the people of LA, and I remain committed to that work,” said Bonin. He also cited a new state law that will allow Los Angeles and other cities to control speed limits on local roads.

Vision Zero topped $ 61 million in this year’s budget, according to the transportation division, while the program has received between $ 26 million and $ 47 million in recent years. Those numbers included funds devoted to other departments like the Department of Engineering, the Bureau of Street Lighting, and the LAPD, Sweeney said.

Seleta Reynolds, director of the city’s Department of Transportation, said in 2017 it could cost up to $ 80 million to achieve a 20% reduction in fatal and serious accidents involving pedestrians and cyclists.

“We have to make Vision Zero a priority, we have to fund Vision Zero,” said Tamika Butler, a transportation consultant whose clients include government agencies. She said the city should seek funding for the program from the police and fire departments.

“Our budget documents are our priority documents,” added Butler.

Michael Schneider, founder of Streets for All, is one of the Safe Street activists who are now turning their attention to the June primary, in which voters will take part in several city council elections as well as a mayoral campaign. LA remains “unnecessarily dangerous” for hikers and cyclists, he said.

“In 2022 we have to elect politicians who actually redistribute the space of cars in order to make our roads safer for everyone,” said Schneider, “and not just pay lip service to Vision Zero.”

The Times authors, Emily Baumgaertner and Russ Mitchell, contributed to this report.

Inbreeding could mean the end of Southern California mountain lions, but there is a way to save them – Daily News