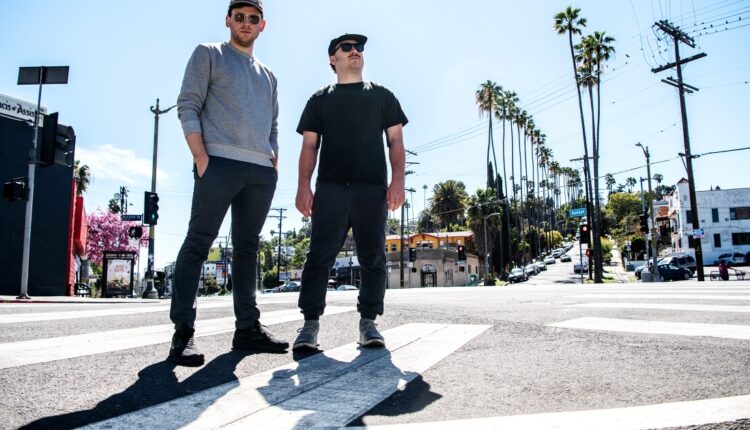 The last five miles were the hardest.

It was 6:47 am on a Sunday in Manhattan Beach. A few locals jogged or cycled along the Strand path that lines the coast; many more were still asleep.

Two men limped along the strand, the sandy beach on one side, multimillion-dollar beach houses on the other, and gray skies above. They were a mere five miles from their goal: completing a 50-mile walk across Los Angeles.

Every step brought pain. “Really hurting a lot,” bleary-eyed Brooke Palmieri said as he recorded himself and friend Zachary Weathers vlog-style for his Instagram Story, trudging along in visible discomfort.

Besides a few brief videos they posted on Instagram, the pair “didn’t talk very much during those last miles,” Weathers said a few days after their journey. “You are really just focusing on moving one foot in front of the other.”

They didn’t consider stopping but “knew that it was definitely possible for our bodies to break down,” he said. “It was really just a race against time.”

In a city notorious for its freeways and headache-inducing traffic, most Angelenos know the saying “Nobody walks in LA” is far from the truth. But few have attempted to walk 50 miles across its sun-soaked expanses over the course of a single day.

That’s how the 30-year-olds spent part of their Presidents Day weekend — walking from Pasadena City College to south of the Redondo Beach Pier in roughly 18 hours. They don’t “have a really good reason” for basically walking two marathons back to back, Weathers said with a laugh. But along the way, they discovered shops, restaurants and curiosities invisible to most drivers — and they learned just how walkable LA really is.

“We’re gonna tell our grandchildren about this,” Weathers said. “You don’t remember going out to a random house party with your friends. We’re gonna remember this forever.”

The friends’ fascination with long walks in LA began during the early months of the COVID-19 shutdown in LA “There wasn’t much to do, so we decided to see if we could walk 20 miles from Chinatown, where we were both living at the time, all the way to the coast,” Weathers said. “It just kind of grew from there.”

After tackling progressively longer walks — a 40-mile walk from Chinatown to Palos Verdes felt like “a big, big accomplishment,” he said — Presidents Day weekend’s not-too-hot, not-too-cold weather provided the perfect opportunity to attempt 50 miles on foot while tracking their journey on Pacer, a step tracking app.

Weathers and Palmieri set out at 12:30 pm, clad in T-shirts, baseball hats and sunglasses. Their path: across LA to the beach — the Santa Monica Pier, to be exact — and down the coastline to Redondo Beach.

They commemorated the start of the adventure by taking a video for their friends following along on Instagram and posting a photo of themselves with the 1980s hit “I’m Gonna Be (500 Miles)” by the Proclaimers.

“We just started the big walk,” Palmieri said in another video. “This one’s a big one; we don’t know if we’re actually going to make it. Last time we did 40 and we barely made it.”

Friends sent encouragement along the way. Early on, a friend posted a video tagging Weathers and Palmieri and saying, “They’re doing a 50-mile walk today. If anyone can do it, it’s gonna be them.”

At Mile 5, just before hitting Highland Park, they checked in with their followers again, doing a tongue-in-cheek “body check” to assess any looming aches or pains. “I’m feeling good,” Weathers said. “Right outside Highland Park — we’re coming for you, HP.”

Their route included familiar LA streets: York Boulevard to Eagle Rock Boulevard, down Sunset Boulevard with a stop at the Win-Dow in Silver Lake for lunch, ordering a grain bowl apiece and splitting a crispy chicken sandwich.

LA’s restaurants, bars and storefronts gave the two plenty to discuss. “LA just gives you a plethora of things to talk about as you walk,” Palmieri said. For example, a quick stop at Galco’s Soda Pop Stop in Highland Park left Palmieri remarking, “I haven’t had a soda pop in forever.” And then even more memories spilled out.

Weathers, a postproduction coordinator and producer, and Palmieri, a freelance editor, met as 6-year-old classmates in Santa Cruz. Exploring their hometown by foot became the norm by the time they were teenagers. “We would walk from out in the suburbs to Santa Cruz along railroad tracks,” Weathers said. The two friends now live roughly a mile from each other in the Los Feliz area.

As they walked, they started saving restaurants and shops they plan to visit in the future on Google Maps, including “stuff that you would only find by literally walking by and have no real online presence at all,” Weathers explained. Their long walk down Santa Monica Boulevard was particularly fruitful; they now have places such as Guatemalteca Bakery, the Broadwater Plunge bar and the Tacos Espiritu Santo stand pinned on their maps.

“The city kind of becomes a little bit smaller, which is really cool,” Palmieri said.

The Westfield Century City mall off Santa Monica Boulevard was their “major” stop, at nearly 10 pm Prior to reaching LA’s Westside, the duo mainly stopped in gas stations and minimarts for water and bathroom breaks, sharing a backpack filled with trail mix, extra socks, a foot care kit and a battery power bank to charge their phones. They swapped the bag back and forth every five miles.

“We tried to get Eataly,” Palmieri said, but they arrived too late. The two instead settled for double SmokeShack burgers, fries and milkshakes at Shake Shack. Weathers calculated they’d burned about 5,000 calories at this point in the walk. “I think we ended up eating about the same amount of calories,” he said.

Weathers and Palmieri had a long night ahead; After leaving the mall, they continued west on Santa Monica, passing at least a dozen car dealerships and auto shops — “the worst” part of the walk, Weathers said.

The two were seriously hurting by the time they reached the beach. “Once you hit Mile 25 … you just kind of have this base level of pain,” he said. “Once we hit that Santa Monica stretch, my pain was always at like 6½” out of 10, Palmieri agreed.

The blisters provided, at least, one more reliable conversation topic. “I remember at one point I was like, ‘Let’s try not to complain for like three miles,'” Palmieri said, laughing. Zachary Weathers wore Allbirds to walk 50 miles in LA in a day, and when he posted about it on Reddit, commenters were shocked.

After reaching the Santa Monica Pier, they went south along the long and winding Marvin Braude Bike Trail, Weathers slipping on a Patagonia down jacket and Palmieri donning a plain gray sweatshirt they had stuffed in their backpack. The friends headed south past the Venice Skatepark, around Marina del Rey — pausing to take a video of bellowing sea lions lounging on a dock at 3:30 am — through the Ballona Wetlands and down Dockweiler State Beach, which Weathers described as “the longest beach in the world, it seems like.”

“We barely saw a soul for four hours, which is kind of cool,” Weathers said. “It was actually very peaceful.”

The pair were still walking alongside the Pacific as dawn approached. “It was surreal as the sun came up and we started encountering runners and bikers on the coastal path,” Weathers described. “The sun’s rising, and you’re like, ‘Wow, I think we’re really going to do it.'”

Time seemed to slow the closer they got to completing the 50 miles. “The last mile was brutal,” Weathers said. “Our feet were so sore every 10th of a mile became a huge accomplishment.”

The pair hit their goal around 10 am, just after passing the Redondo Beach Pier. “Right when we got to the 50-mile mark, we stopped and couldn’t really walk anymore,” Weathers said.

Weathers’ girlfriend was there to give them a ride home, setting up a homemade finish line made of party streamers at the place where they estimated they would hit their goal. Sadly, the finish line went unused. “We miscalculated where we would hit the exact 50-mile mark, and we were too worn out to walk an extra two blocks to meet her where she was set up,” Weathers said.

“I think she was pretty shocked to see how slowly we crossed the road,” said Palmieri.

Still, the two friends had made it 50 miles together, and within a few days, the pain had started to fade.

“I got out with minimal blisters,” Weathers said. “Muscle-wise, I’m not even sore. It’s just like my skin’s a little irritated on my pinky toes, weirdly enough, and my heels.”

“I’m still like personally recovering, walking slower than I normally do,” Palmieri said. However, “you come out in a better state of mind, even though you’re hurting really badly.”

“I think there’s something kind of meditative about it,” he said, after considering the trek for a moment.

Two days later, their adventure across Los Angeles blew up on Reddit.

“I just posted it randomly, right before I was going to a movie, and I really didn’t expect it to be so popular,” Weathers said. It’s since garnered 9,000 upvotes and 1,000 comments, with responses ranging from admiration to utter disbelief.

“Everyone was just like, ‘What shoes are you wearing?'” Weathers said. (The answer: Weathers donned a pair of Allbirds, while Palmieri wore Brooks sneakers.)

Safety was another big topic in the comments. “A lot of people were saying like, ‘It’s so dangerous that you did that in LA,’” Weathers said, and asked him whether he had any close calls with cars or other people while walking around in the middle of the night.

“Honestly, LA is very walkable,” he said. “There were sidewalks and bike paths the whole time.”

“People were like, ‘How did you not get robbed?’ We literally had zero confrontations the whole time,” Weathers said.

The experience isn’t without risks — especially for women and people of color — and Weathers doesn’t necessarily recommend that anyone try it on their own. “But if you have a friend or two that are willing to do it, I would say go for it.” 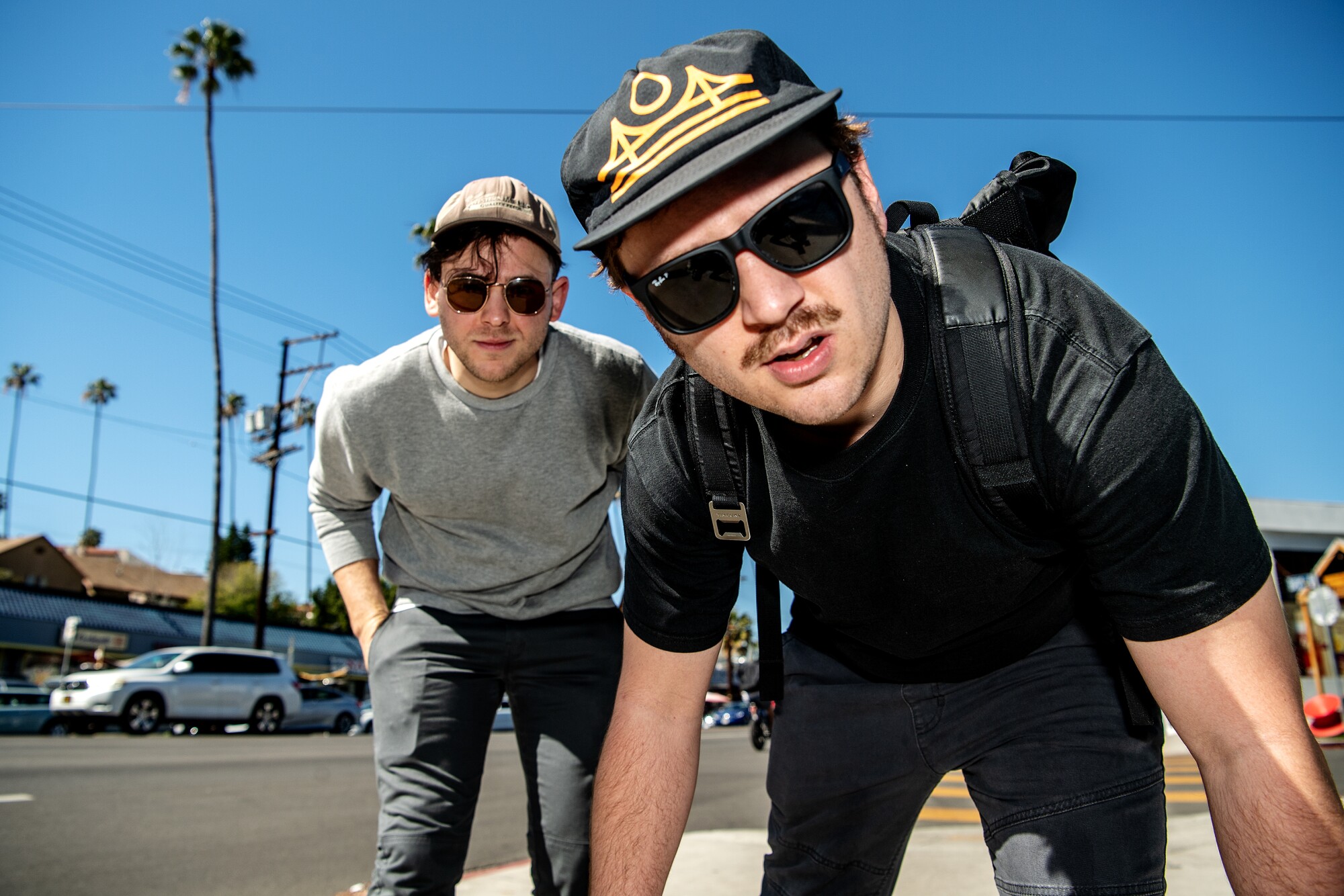