How Tory can fight Terry Silver in Season 5 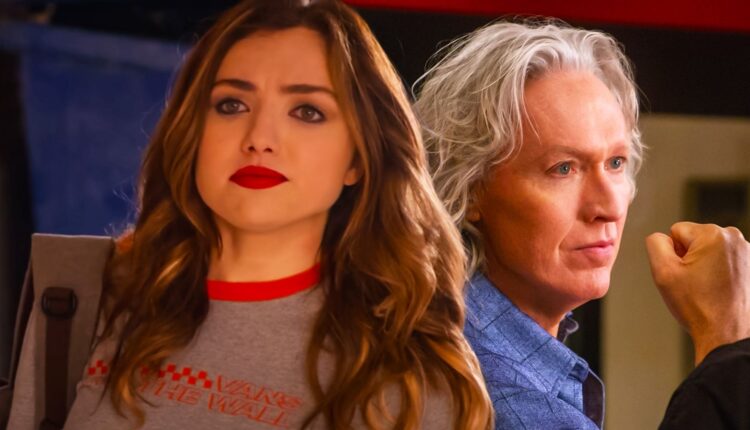 The end of season four of Cobra Kai sparked a conflict between Tory Nichols and Terry Silver. So the teenager can take revenge on her Sensei.

The end of Cobra Kai Season 4 sparked a conflict in season 5 between Tory Nichols (Peyton List) and Terry Silver (Thomas Ian Griffith), and so the “Queen Cobra” can fight her Sensei. Tory won the first-ever All Valley Karate Championship for girls by defeating her archenemy Samantha LaRusso (Mary Mouser). Their victory also resulted in Cobra Kai winning the All Valley Grand Championship. But Tory’s jubilation at proving she was the best was short-lived; Nichols was heartbroken to discover that Silver had bribed the umpire to get the final fight in Cobra Kai’s favor.

Cobra Kai Season 4 has significantly evolved Tory from her original role as Sam’s ruthless archenemy who was evicted from West Valley High. Tory’s troubled personal life was revealed in season three of Cobra Kai; Despite her teenage years, Nichols is the sole breadwinner of her family and takes care of her ailing mother and younger brother. When Sam’s mother, Amanda (Courtney Henggeler) found out about Tory’s plight, she felt sorry for Nichols and encouraged her return to school despite Samantha’s objections. After junior prom, Tory confessed to Robby Keene (Tanner Buchanan) that she wanted to win the All Valley so she could know she was the best at something. Defeating Samantha, who competed in both Miyagi-Do and Eagle Fang karate, eventually confirmed Tory, but her joy was stolen when she learned that Silver had cheated on her behalf. For his part, Silver has no idea that Tory knows he cheated in the All Valley when season four of Cobra Kai ended, but his deception could cost Cobra Kai her best fighter in the long run.

Though the troubled teen is clearly an underdog to her multi-million dollar sensei, Tory is poised to take some kind of revenge on Terry in season 5 of Cobra Kai. It’s hard to imagine Nichols actually fighting her imposing sensei, but there are ways she can effectively fight back on Terry. Tory’s easiest revenge would be to go public that Silver bribed the umpire at All Valley. This would harm Nichols as it would likely void their championship win. But exposing Terry’s devious tactics would also create a scandal and sabotage his master plan to open Cobra Kai dojos across the San Fernando Valley. The very first girl champion, who confessed that Cobra cheated on Kai’s Sensei in the All Valley, would limit Silver’s chances of recruiting new students. It would probably embarrass Terry as much as it lost to Daniel LaRusso (Ralph Macchio) in The Karate Kid Part III.

Tory may also help John Kreese (Martin Kove) after she and the rest of Cobra Kai’s students find out he was arrested for assaulting Stingray (Paul Walter Hauser). Nichols is the closest student to Kreese who obviously has a soft spot for her. Tory could learn the truth that Terry Kreese had posted for the attack, which Silver actually did himself so he could take over Cobra Kai. After all, Tory’s loyalty is to Kreese, not Terry, and she could potentially work for John to prove his innocence. Kreese, taking Cobra Kai back with Tory’s help, would be sweet revenge for both of them.

Eventually, Tory Cobra could attack Kai and help Daniel LaRusso fight Terry Silver. Daniel brought in Chozen (Yuji Okumoto) from Okinawa to help him go on the offensive against Cobra Kai, but the help of her champion contender would be a coup. Whether Sam would agree or not to her and Tory suddenly fighting on the same side is doubtful, but Nichols apparently kept her promise to Amanda that the All Valley Finals would be the end of her feud with Sam, at least on Tory’s side. Tory was a more personable character by the end of season four of Cobra Kai, but if Nichols does get into a conflict with Terry Silver, the “Queen Cobra” will need all the help she can get Cobra Kai season 5.

Next: How Robby anticipated the end of Sam’s Cobra Kai season 4

John Orquiola is a features writer who has been with Screen Rant for the past four years. He began as an assistant director on various independent films. A lover of film and film theory, John wrote humorous film reviews on his blog Back of the Head that caught his attention from Screen Rant. John happily became the Star Trek guy at Screen Rant, directing feature coverage of the various Star Trek series, but he also writes on a wide range of topics from the Marvel Cinematic Universe to Cobra Kai. His other big nerdy loves are British TV series like The Crown, Downton Abbey and Killing Eve. John can be found on Twitter @BackoftheHead for photos of his meal.