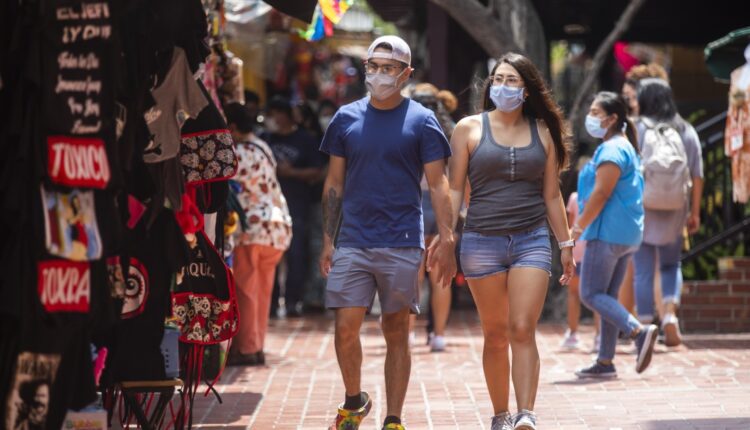 Remember when the economic recovery in California and the nation would appear like its Roaring Twenties? That’s what UCLA forecasters predicted nine months ago.

Do you remember when it was probably “euphoric”? They said that six months ago.

Or was it expected to be a “boom for the US economy”? That was three months ago.

But the delta variant of the coronavirus has turned the calculations of forecasters on its head – not just in the much-quoted group at UCLA Anderson, but among scholars, government and corporate economists across the country.

The outlook has gone from “crackling to ho-hum,” according to UCLA’s quarterly forecast released on Wednesday.

“Economic optimism was palpable in the spring,” wrote Senior Economist Leo Feler. “The US vaccinates an average of 2 to 3 million people a day. The economy was opened again. The hiring was sped up. It looked like COVID was finally behind us. “

But with ingrained vaccine resistance and rising deaths in many states, consumers are reluctant to spend money on entertainment and restaurants, workers are retiring instead of infected at work, business and international travel are dormant, and global supply chains are jumbled with the virus close factories abroad, said Feler.

“What could have been a few years of blockbuster economic growth instead seems to be years of good, solid, but not spectacular growth.”

UCLA predicts that gross domestic product will grow 5.6% this year, compared to 7.1% forecast in June. She expects the economy to expand 4.1% next year, up from the previously expected 5%.

With consumption and investment shifting into the future, growth could be 3.1% in 2023, up from the 2.2% previously forecast.

According to the new calculation, GDP would not reach its pre-COVID-19 trend until the third quarter of 2023 – provided Feler said the stalemate in Congress over lifting the debt ceiling is resolved.

“A debt default would be a self-inflicted wound – bad for the economy, but we don’t really know how bad it is,” he said.

UCLA’s forecast for this year is a little less optimistic than the Federal Reserve, which forecasts GDP growth of 5.9%, up from its June forecast of 7%. The Fed is forecasting growth of 3.8% for next year.

California began to recover later than some other states due to its stricter public health measures, but those interventions will result in the state recovering faster than the nation over the next three years, suggest UCLA economists Jerry Nickelsburg and Leila Bengali in front.

As of Sunday, the Golden State had the lowest weekly coronavirus case rate of any state: 83 cases per 100,000 population. This is compared to 271 cases in Texas and 248 cases in Florida – states with loose regulations.

Another boost to the state’s economy is that the virus has led to more remote working – a factor that benefits its large tech and professional sectors.

The labor market will depend on the uncertain course of the pandemic, the forecasters wrote, but they expect employment in California to rise 3.5% this year, 3.9% next year and 2.7% in 2023 will. Nathaniel Mathis, a waiter at the Off Vine Restaurant in Hollywood, brings a drink to customer Shiela Murphy, left, who is sitting on the outdoor terrace with her friend Tracey Regenold. Both are from Phoenix. Hollywood is trying to recover from pandemic business closings.

This contrasts with projected US employment growth of 3.1%, 3.2% and 2.1% over the same three years.

“Delta has scared consumers,” wrote Nickelsburg. “Breakthrough news [infections] and the large number of unvaccinated Californians is likely to drive a full recovery in the second half of 2022. “

Other forecasters are less optimistic. “I don’t expect a full recovery in California jobs by the end of 2023 or even 2024,” said Scott Anderson, chief economist for Bank of the West in San Francisco. “California’s economic performance will not be quite as strong as it predicts with its rosy assumptions about better health outcomes.”

Seventy percent of the jobs lost in the California pandemic are in three sectors: recreation and hospitality, education and “other services,” a diverse category of businesses such as hair salons and auto repair shops. What they have in common: high personal contact.

Teachers are returning to work, but leisure and hospitality employment “will be the last to recover due to the sharp decline in the sector, the slower return in demand for restaurant and bar services and the subsectors dependent on international tourism “. Nickelsburg wrote.

California’s unemployment rate, traditionally higher than the country’s due in part to the state’s reliance on tourism, leisure, and hospitality, is projected to be 7.6% this year, 5.6% next year, and 4.4% in 2023.

In 2019, before the coronavirus outbreak, unemployment in Golden State had dropped to 4.2%.

As for labor shortage complaints, US companies could post 11 million job vacancies and 8 million people nationwide could be unemployed, Feler said, but “Sectors that require work are different from sectors that used to work. California may have engineering and engineering vacancies, but how does this help someone who has worked in leisure and hospitality? “

He also said, “In the past, being a waiter in a restaurant wasn’t a risky job. It is now. And it’s hard to get back to work when your child is sent home from school and quarantined for 10 days. You need a job that is very flexible. “

Logistics is a bright spot in California. Asian imports are flooding the vast ports of Los Angeles and Long Beach, spurring the construction of distribution centers across the Inland Empire, buoyed by the booming pandemic demand for equipment such as home fitness equipment, electronics and furniture as consumers spend more on goods than travel, Food and cinema tickets.

Transportation, storage, and utilities jobs in the Golden State are expected to grow the fastest of any sector at 5.4% this year, slightly above the 5.3% in the leisure and hospitality industry.

Shipping prices have now skyrocketed, dozens of ships are docked in southern California due to logistics constraints, and many imported goods, including windows, semiconductors, and automobiles, are in short supply – factors that contribute to inflation.

The pandemic-induced shift in spending on services towards buying more goods coincides with COVID-related factory closures in Vietnam, Thailand and other manufacturers of US imports.

“We are in a moment of temporary shock,” said Feler. “Even if the US is vaccinated, the rest of the world will still not be vaccinated – or they may have been vaccinated with a less effective vaccine.

“In a globalized economy, they produce our consumer goods. If they can’t go back to work because of the pandemic, we won’t get the products we want to buy – and that has economic repercussions. “

The pandemic has hit disproportionately low-income Californians and increased inequality in the state, according to UCLA’s forecast, which includes a section about Los Angeles, the nation’s most populous county with 10 million people. The city, with its service and tourism-dependent workforce, is particularly hard hit, according to a report by economist William Yu.

Cities with large tourism economies have the highest job losses, Yu reports. In July, the number of workers in Los Angeles fell 8.7% from pre-pandemic levels. Others were worse off, however, with payrolls dropping about 10% in New York, Honolulu, Las Vegas, and Orlando, Florida.

More than a third of households in the US and Los Angeles earn less than $ 25,000 a year.

Inequality is caused by factors such as “technology shift, globalization, socio-economic environment, government policies, and immigration,” Yu wrote, but he suggested that educational inequality is the main cause of low wages and poverty.

But many southern California colleges are among the highest in the country in terms of the percentage of low-income students who hit the top 20% of income later in life, according to a recent study, Yu wrote.

Dodgers broadcaster Jaime Jarrín is retiring after the 2022 season

Jessica Alba weighs son Hayes, three, when they get off in Santa Monica