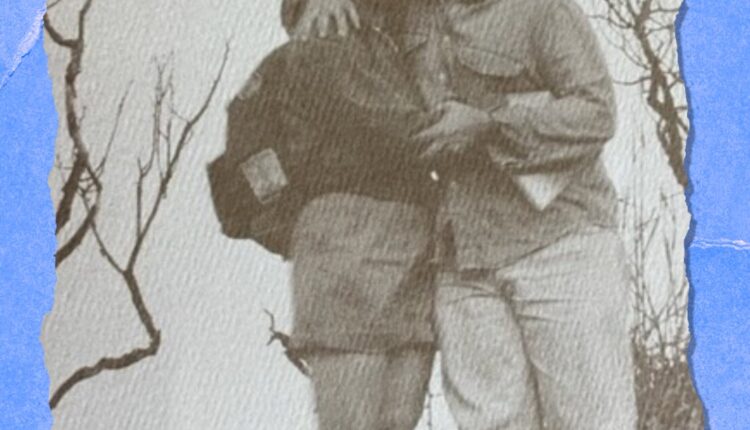 Most of the milestones in my life happened on a trail. I fell in love with my husband on a hike. I got married twice on the same day: first on a hike to Hoegees Camp north of Sierra Madre and a second time at a hilltop park in San Pedro. Both ceremonies were held outdoors; both were held among loved ones. We invited guests (invitation above) to “two weddings and a hike.” Each person could choose which event they wanted to attend; at least 20 people attended both. I loved that day.

Now I’m marking another milestone, not with a hike but with a goodbye. I loved writing and launching The Wild two years ago — and the enthusiastic responses I received from readers. The Wild readers reinforced what I knew was LA’s best-kept secret hidden in plain sight: The city has a community of hard-core outdoors lovers who celebrate one another on trails and mountaintops, at road races and century rides, in botanic gardens and native plans events.

As I leave the Los Angeles Times, I am handing the baton to other outdoors writers, starting with Matt Pawlik, whom you’ll see in this space next week. You can find me @maryforgionehikes on Instagram. See you on the trails.

3 things to do this week 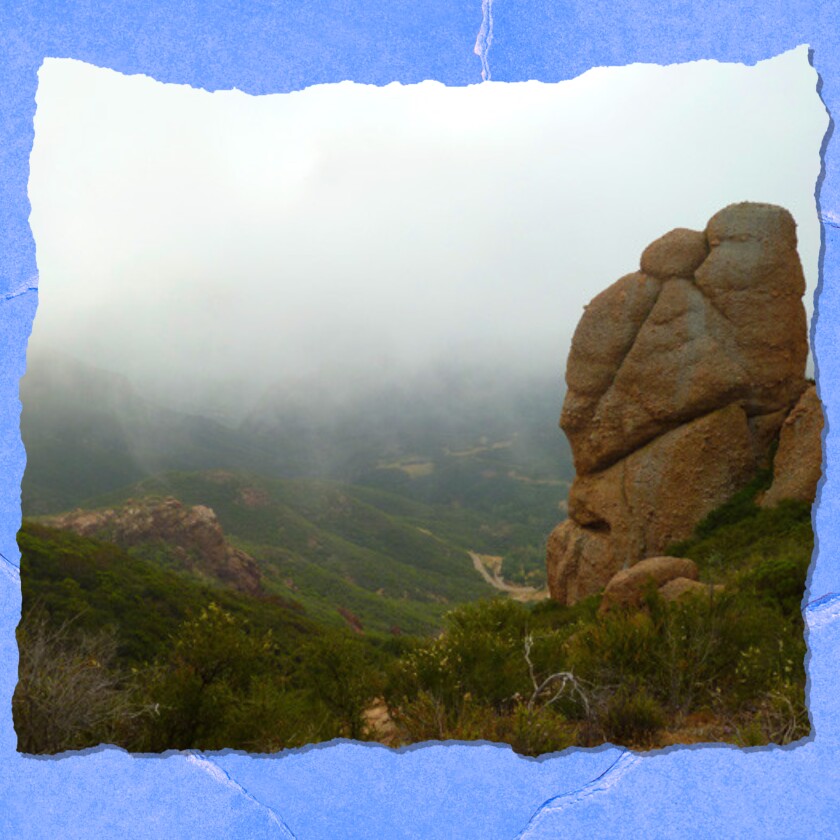 The trail to Sandstone Peak in the Santa Monica Mountains.

1. Meet a ranger who wants to teach you how to stay safe outdoors. Sure, you like to hike, but do you know all the potential pitfalls? Join the free “Ranger Meet Up: Safe Not Sorry Pop-Up” at a trailhead in the Santa Monica Mountains to learn about native plants (which ones sting or secrete?), animals (which ones bite?) and other trail-worthy tips . Register for 9 to 11 am or noon to 2 pm Saturday; meet at Sandstone Peak Trailhead parking lot, 12896 Yerba Buena Road, Malibu. More info here. 2. Take a guided tour of UCLA’s botanic garden. UCLA considers its on-site terraced garden a “living museum” because it features species from all over the world. It’s named for botanist and professor Mildred E. Mathias, who photographed the garden between 1952 and 1993. Take a free guided tour (you must sign up in advance; COVID protocols apply) 1 to 2 pm Saturday. Meet at La Kretz Garden Pavilion, 707 Tiverton Drive, Los Angeles. Here are 10 more quiet places to explore. 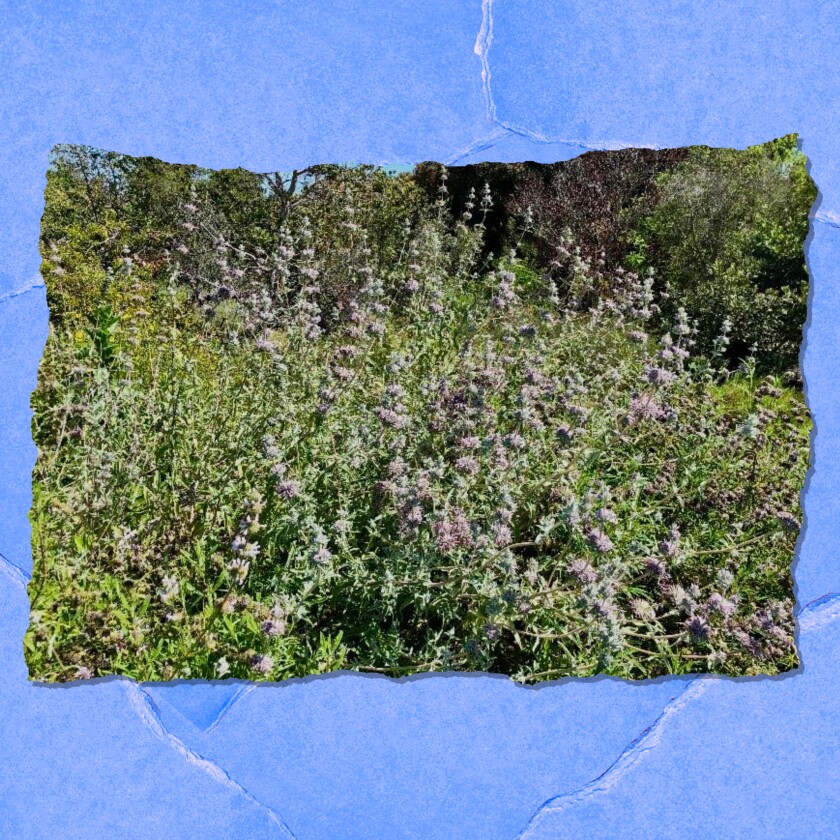 3. Help nurture native SoCal plants for restoration projects. Here’s a great way to learn about milkweed, sage and other California native plants. The Rancho Sierra Vista nursery in Newbury Park needs volunteers to help “process cuttings, transplant seedlings, divide local grasses, sow seed flats, weed, water and fertilize our over 30,000 plants being grown for local restoration purposes,” according to a news release. Participants must register ahead to help out from 9 am to 2 pm (you may arrive anytime in that time frame) Saturday. You’ll receive up to three native plants for your efforts. Can’t go? The nursery needs volunteers on other Saturdays too; more info here. 4. Join a trek to see SoCal’s population of Pacific green sea turtles. They came, they saw, they liked the balmy waters. That’s pretty much why Pacific green sea turtles, which typically live in tropical and subtropical waters farther south, thrive in the San Gabriel River at its outlet to the sea near the Long Beach-Seal Beach border. Join a free Turtle Trek from 8 to 10 am Saturday that includes an introduction to the Los Cerritos Wetlands. Meet in the parking area at the corner of 1st Street and Pacific Coast Highway in Seal Beach; more info here. 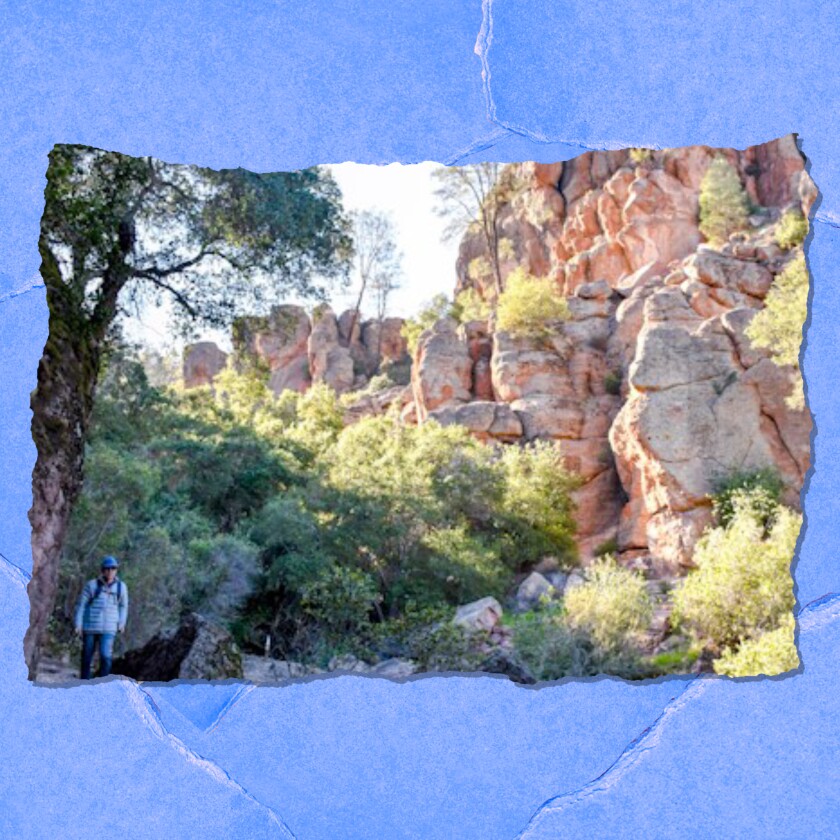 Think about organizing a TrashBlitz event at Pinnacles National Park.

5. Organize a TrashBlitz cleanup in a national park. A Santa Monica-based environmental organization is out to identify how much and what kinds of plastic trash wind up littering our national parks. The 5 Gyres Institute launched an effort to identify the “top items, materials and brands of waste found in 63 national parks,” according to a news release. That’s where you come in. Volunteers are needed to organize cleanups and remove trash in national parks (here are parks closest to LA), then log what they find on the TrashBlitz platform. The campaign comes on the heels of Interior Secretary Deb Haaland’s recent announcement that selling single-use plastic products on federal lands will be phased out by 2032. 5 Gyres wants action sooner — and is documenting plastic pollution in national parks in the hopes of speeding things up Go with the glow on this SUP adventure.

6. Stand-up paddlers, get your glow on. Now for something completely different: a nighttime stand-up paddle in Newport Beach. How different? The bottoms of the boards are outfitted with waterproof LED lights that illuminate the surrounding water in a quiet glow. Mark Oehlman, owner of Pirate Coast Paddle Co., says it can be a spiritual experience. One caveat: It’s not for novices; Practice with daylight paddles. Read what it’s like to go to the dark side on an SUP. A hiker walks through redwood trees.

Redwoods are big, some of the biggest trees on the planet. And their size — and the size of everything around them, like jumbo-sized ferns in the understory — can mess with your sense of scale. “You seem to be shrinking,” Christopher Reynolds writes. “You’re hiking through dense Northern California greenery, passing from a dirt path to an elevated walkway. And the trees are getting taller.” A new path, the Mill Creek Trail, takes visitors through the three-acre Grove of Titans in a parkland near the California-Oregon border. Read more about the secret hike through California’s giant redwoods that takes you to another world. 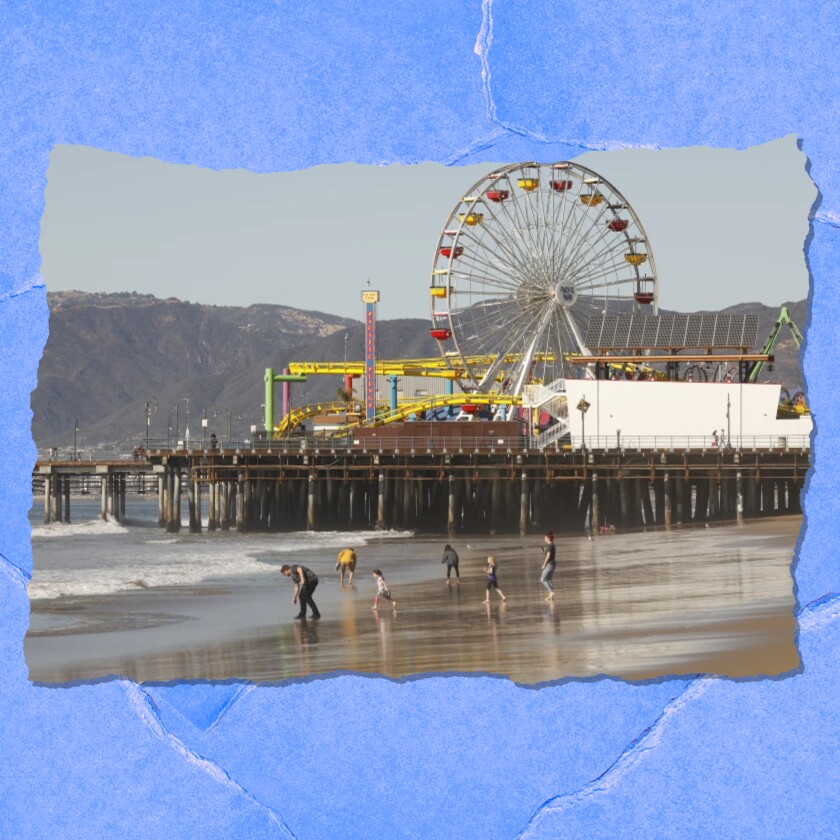 Santa Monica Pier ranks among the dirtiest beaches in California this year, after a surprising spike in pollution.

California is known for its classic beaches, but not all are squeaky clean. In fact, some are downright dirty — and scored poorly on Heal the Bay’s annual beach report card. Among the dirtiest: Santa Monica Pier. “City officials are still trying to figure out what’s causing this new spike in pollution,” The Times’ Rosanna Xia reported. “Birds roosting and pooping under the pier are likely culprits. (Birds are also likely behind the high bacteria concentrations logged this year at Vaughn’s Launch in Newport Bay, which is situated within an ecological reserve.)” Check out the full list of the state’s dirtiest beaches. A mosquito is examined under a biologist’s lamp in Salt Lake City.

Ugh! It’s mosquito season in Southern California. That means you need to check your backyard for standing water — in a bucket, empty plant pot, whatever — because that’s where mosquitoes like to lay their eggs. As for personal protection, bare skin and wearing dark clothes make you a bite-worthy target. Here are more tips on ways to defend yourself against mosquitoes this season. With so much happening in the world these days, you may have missed news about a crucial wildlife bill making its way through Congress. The Recovering America’s Wildlife Act would fund efforts — to the tune of $1.39 billion annually — to keep endangered and threatened species from going extinct.

Three years ago, a comprehensive UN report documented an “unprecedented” decline in nature and warned that 1 million species were threatened with extinction. Why should we care? Margaret Renal wrote in a New York Times op-ed piece why what’s good for spotted owls or snail darters is good for us too: “We are not apart from nature. We are a part of it. Whatever happens to the air that spotted owls breathe, and the water and soil that feeds the forests they dwell within, also happens to the air we breathe, the trees that filter the carbon we produce, the water we drink, the climate that affects it Alles.”

The bill recently passed in the House and now heads to the Senate.

Send us your thoughts

Share anything that’s on your mind. The Wild is written for you and delivered to your inbox for free. Drop us a line at [email protected]

Click to view the web version of this newsletter and share it with others, and sign up to have it sent weekly to your inbox. I’m Mary Forgione. I’ve been exploring trails and open spaces in Southern California for four decades.