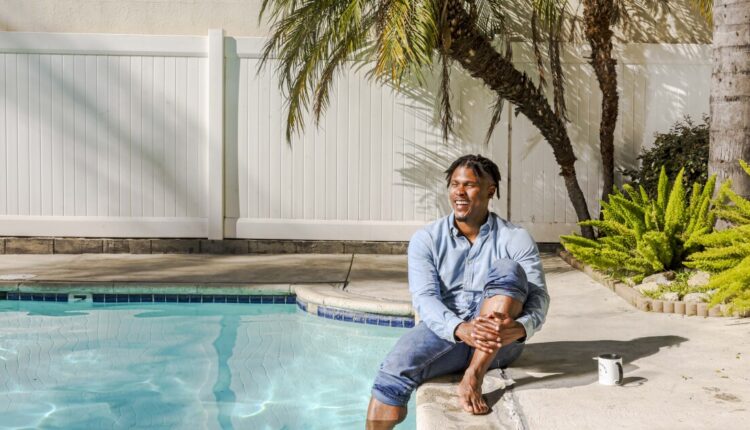 When Carmen Dianne and Kara Still launched Prosperity Market a year ago, they hoped to raise enough money to build a mobile trailer that would serve as a Black farmers market and a food truck. While waiting to see if their dreams come to fruition, they’ve hosted a series of pop-up events around Southern California, from Inglewood to Malibu.

All the while, their business has started to evolve into something more: an incubator and a community for budding entrepreneurs.

“We knew we would be helping to support and amplify Black businesses, but I didn’t know how it would look,” said Still, 38.

Prosperity Market now has a rotating roster of more than 60 vendors who sell produce, juices and pastries, among other goods, at the pop-ups. Dianne and Still have shared marketing tips and guidance on building a web presence. They are creating a program that emphasizes resources for business necessities such as fundraising and commercial kitchens and are working with the Los Angeles Food Policy Council to get their vendors’ produce and goods into neighborhood stores through the Healthy Neighborhood Market Network program.

In addition, Still and Dianne have created a networking space at their pop-ups where purveyors can reach out to one another for support. Some buy produce from fellow vendors to make their goods, while others share commercial kitchen spaces and information on how to acquire proper certifications for their businesses.

“We intended to create this community, yet we’re still surprised to see how the vendors connect with each other even outside of Prosperity Market,” Dianne, 33, said.

Prosperity Market, which will have a pop-up event on Feb. 26, is counting on community as well.

Last summer, the Jrue and Lauren Holiday Social Impact Fund (JLH Fund) — an initiative founded by the Milwaukee Bucks basketball player and his wife, a two-time Olympic gold medalist for the U.S. women’s national soccer team — awarded Prosperity Market a grant and a three-month financial coaching program. Dianne and Still are using that education to continue fundraising for their mobile trailer and to uplift their vendors.

These are five of the local businesses they have nurtured.

Gloria Allorbi established Gloria’s Shito in January 2021 and reached out to Prosperity Market a few months later after seeing its Instagram feed.

It was a sense of longing that led Gloria Allorbi to make her own shito, a sweet and spicy Ghanaian pepper sauce blended with smoked seafood.

The cosmetic chemist had traveled to her native Ghana in 2019, but when she returned to Los Angeles, she couldn’t find shito anywhere and realized she missed the flavors of home.

“Shito is a beloved Ghanaian condiment, equivalent to Sriracha or ketchup,” Allorbi, 37, said. It’s similar to Chinese chili crisp, she continued, because it can be added to everything, from eggs to sautéed vegetables and meats.

In trying to re-create her mother’s recipe, Allorbi used traditional ingredients such as ginger, onion, garlic and tomatoes, but found that she had to get creative in finding alternatives for items she couldn’t easily source. She replaced Scotch bonnet peppers with habanero and added Japanese bonito flakes for umami. It tasted like how she remembered it.

Allorbi established Gloria’s Shito in January 2021 and reached out to Prosperity Market a few months later after seeing its Instagram feed. “As a new and small-scale business owner, especially in Los Angeles, there are economic barriers for me in terms of showcasing my product,” Allorbi said, adding that Dianne and Still have given her a platform — the pop-ups — to sell her hot sauce. (Prior to vending at Prosperity Market, she would sell on average 15 jars a month; now it’s 35.)

She’s formed a community within Prosperity Market as well, and other vendors have helped her find a commercial kitchen space.

“Starting a business can sometimes feel lonely,” Allorbi said. “Prosperity Market is bringing small businesses such as myself and others who are further along in their journey together, creating an opportunity to collaborate or connect with and share ideas.” 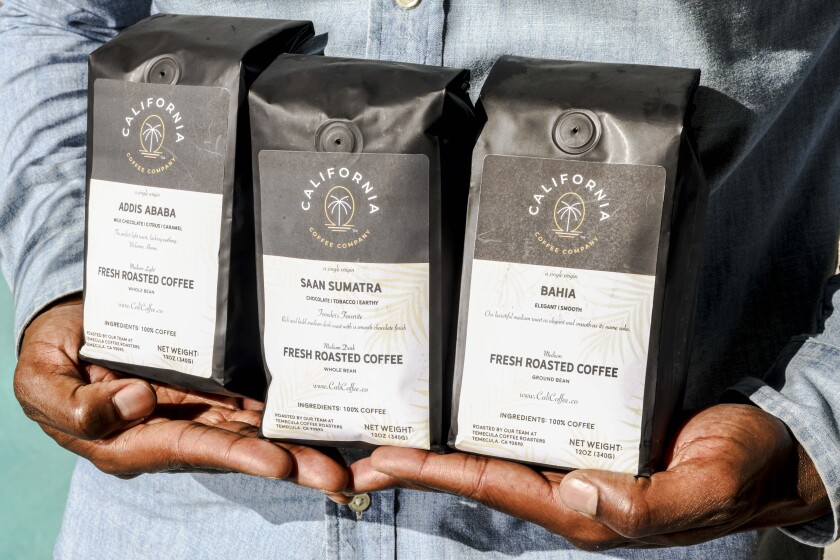 Rhasaan Nichols was creating a short documentary, “Walking on Water: A Brief History of Black Surfers,” when he started thinking about coffee. In his research, he discovered that there are Black surfer communities in Brazil, and many of their enslaved ancestors had to work on coffee plantations.

“When most people think about coffee, it’s similar to surfing, in that they may not necessarily think about Black people,” Nichols said.

He created the California Coffee Company in December 2020. Coffee, he says, is often separated from the people of color who harvest it, so he named his single-origin beans after geographical locations where they’re grown. Addis Ababa, his light roast (with hints of milk chocolate and citrus), for example, nods to Ethiopia’s capital and what is considered the birthplace of coffee; his earthy, medium-dark roast was christened Saan Sumatra.

Nichols, 35, was having a tough time getting into farmers markets, but after discovering Prosperity Market on Instagram, he soon found a home for his roasted beans.

Nichols originally planned to sell only bags of coffee, but Dianne and Still encouraged him to serve it as a beverage as well. There’s been a steep learning curve, Nichols said, adding that he has made mistakes along the way (like dealing with a generator fiasco), and he’s grateful for the support from Prosperity Market and its pop-ups. Since joining the pop-ups, his sales have increased more than 300%, and he’s planning to open his first bricks-and-mortar cafe in March at the Sherman Oaks Westfield Fashion Square. 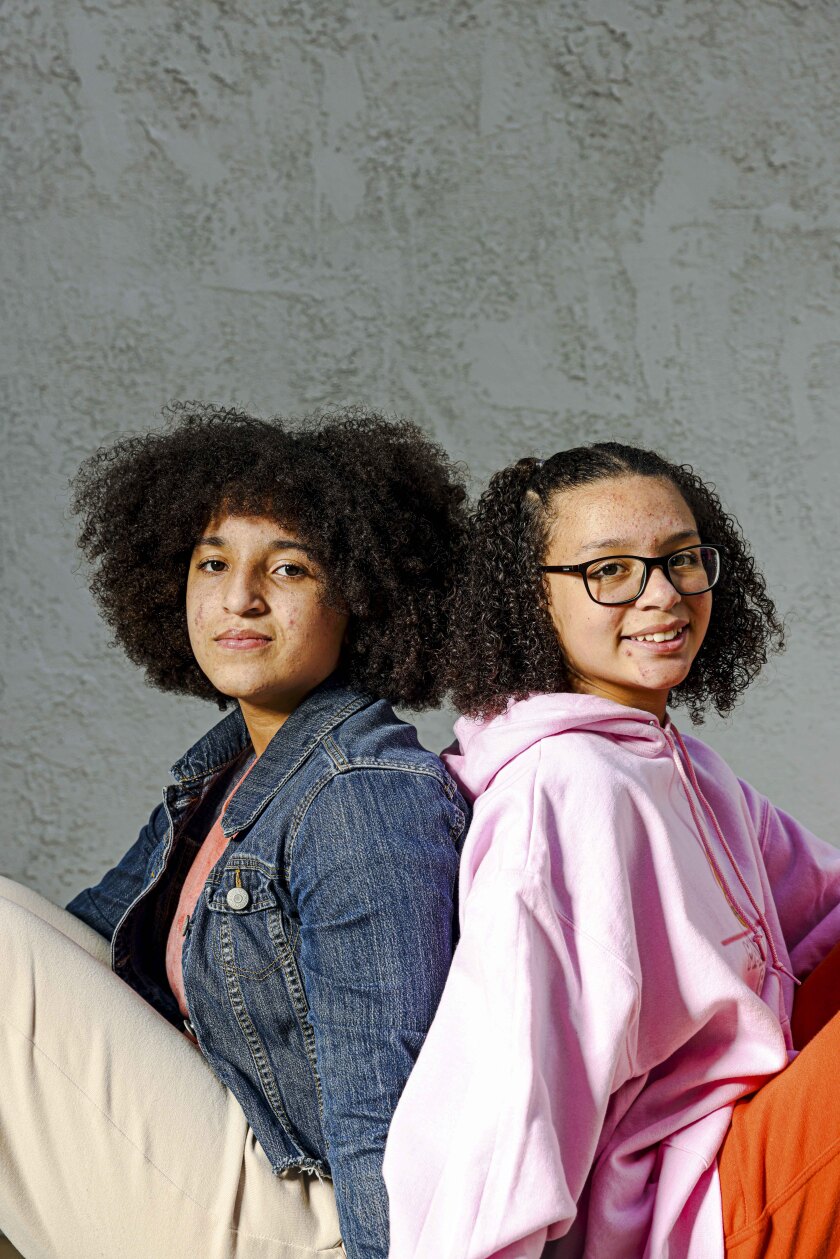 Mariah, left, and Maddy Williams, the sister entrepreneurial team behind Maddy Bear Bakes, juggle the demands of their business with school and activities like karate and competitive cheerleading.

Madeline “Maddy Bear” Williams and her sister Mariah got the idea to start a vegan cookie company in December 2020. Madeline was baking holiday cookies for people in the neighborhood during an especially grim point in the pandemic.

“People were like, ‘How can we help you get more supplies to make more of these cookies? Can we buy these cookies?’” Mariah recalled. “From there, people wanted more and more cookies, so we ended up getting a business license and now we rent a [commercial] kitchen.”

Madeline is 12; her sister, 14, which means they are juggling the demands of their business — Maddy Bear Bakes — with school and activities like karate and competitive cheerleading. Madeline bakes and Mariah handles the business and created their website. Their company also received a JLH Fund grant last summer.

A few months after meeting Dianne and Still, they started vending at Prosperity’s pop-up events. “They help us make sales,” Mariah said. “They also introduce us to other Black-owned businesses that we help support and they help support us. They treat us as equals even though we’re just kids.”

Madeline, who started baking with her mother as a toddler, was 9 when she discovered she had a dairy allergy, which prompted an interest in making cookies with allergy-conscious ingredients. When the sisters started their business, they averaged about five dozen cookies a month; now, they sell 200 cookies per week. Their most popular flavors are chocolate chunk and custom-design sugar cookies, which they sell by the dozen online and individually at in-person markets.

The sisters are interested in expanding their business, which can deliver in the west San Fernando Valley and ship nationally and internationally. “We hope that we can spread to the top 14 allergens and get in some local grocery stores and cafes,” Mariah said. 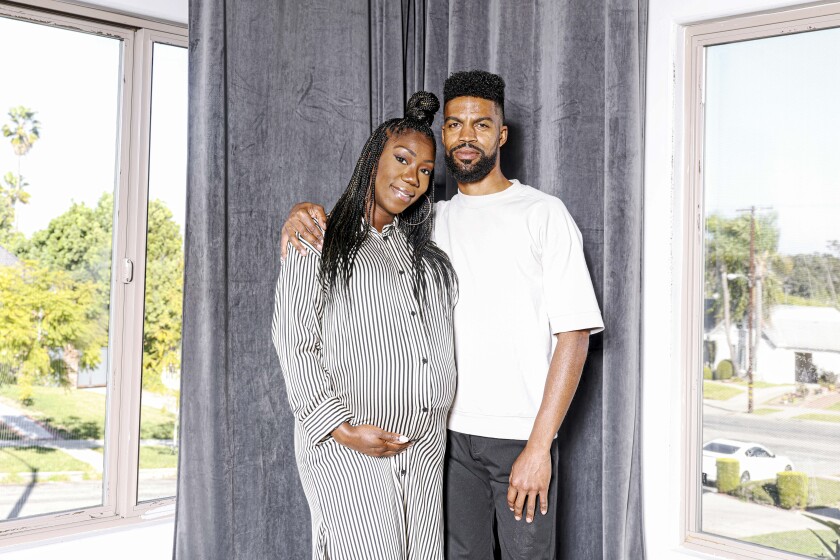 Cecilia and Mario Prins, a husband-and-wife team, are the founders of Prins Wellness, a company that produces cold-pressed and whole-fruit juices.

During the first year of the pandemic, Mario Prins wanted to beef up his family’s nutritional intake and immune system. He began making a gallon’s worth of fresh fruit and vegetable juices every day for his wife, Cecilia, and their young son.

Mario, who was working as a director of creative services in the music industry, was looking to pivot to a new business. Cecilia, an advertising executive, was concerned about the health of the Black community. Their goals were converging in ways they didn’t immediately recognize.

“He was having all these epiphanies with regard to health and wellness, and my mind was focused on the fact that people of color were dying at alarming rates due to COVID — and a lot of that is due to the systematic injustices with the type of food access that we have in the communities,” Cecilia, 41, said.

They decided to start Prins Wellness, an organic juice company that produces cold-pressed and whole-fruit juices. Ingredients like sorrel, passion fruit and dragon fruit make it in their drinks, and they use produce from Prosperity Market vendors like Imani Gardens, IGH Gardens, and Crop Swap L.A.

Mario was introduced to Prosperity Market through a colleague, and Dianne and Still asked if they could join its first pop-up. After the Prinses said yes, they quickly got their business running within six weeks.

“If they weren’t kicking off their first event in February 2021, we probably wouldn’t have launched that early,” Mario, 40, said. “We credit them first and foremost for that.”

Like Still and Dianne, the Prinses are ready to take their business to the next level. For the couple, that means getting investors and finding out how to ship to a larger radius outside of their View Park-Windsor Hills area. 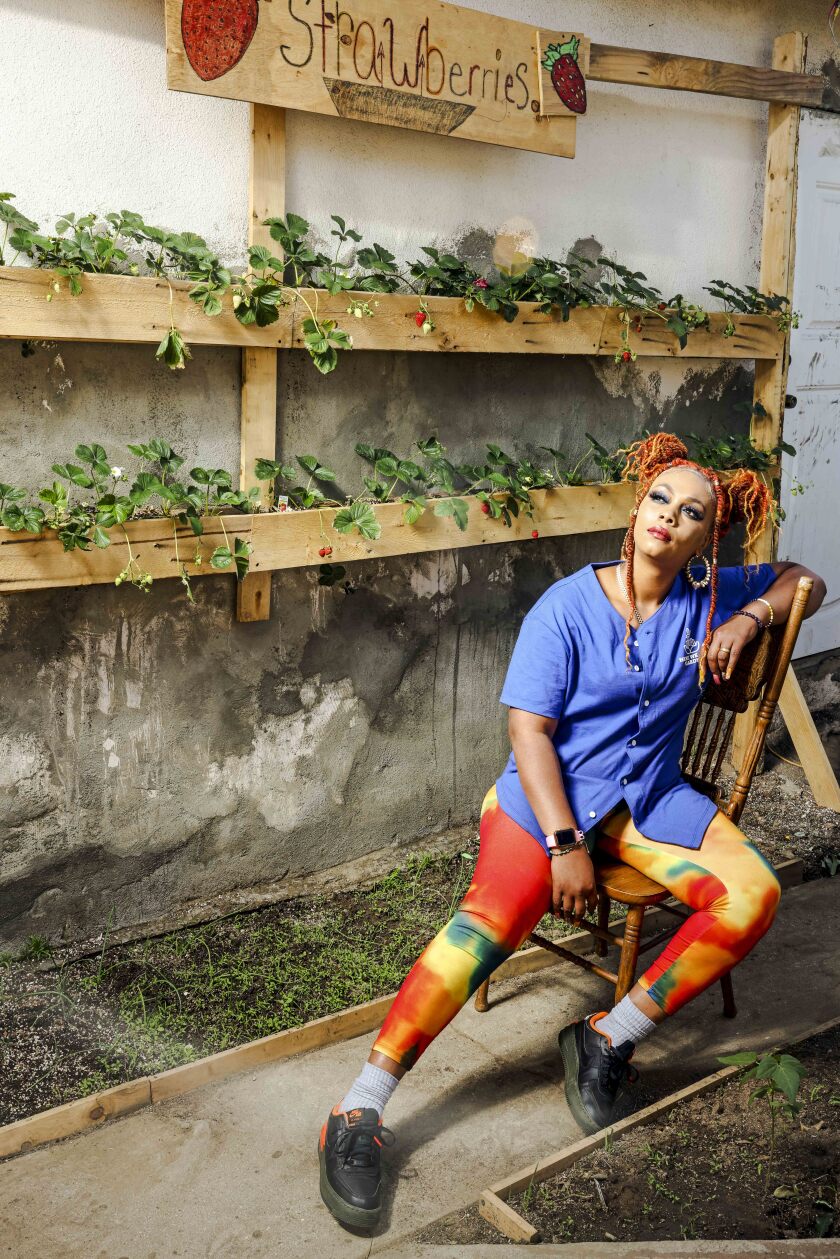 Briann Battle is known for her unique plants and fresh lemonade that she makes from her grandmother’s recipe.

Briann Battle was supporting a friend and vendor at Prosperity Market last February when she met Dianne and Still. The seed harvester and produce grower found herself pitching her new business, Here We Gro Gardens, to the Prosperity Market founders. By the following month, she was a vendor.

Battle is known for her unique plants, from okra grown from 150-year-old African seeds to Mongolian sunflowers that can grow to 14 feet or more and her fresh lemonade made from her grandmother’s recipe.

She started gardening as a therapeutic hobby in 2007. But in December 2020, when her father (“my best friend and role model,” she said) died from COVID-19, Battle knew she wanted to transform her interests into something more.

“With the sudden loss, I was determined to make a change and prioritize my family’s health and made growing my own food a necessity,” said Battle, the 31-year-old mother of four. “I noticed how we were saving money on groceries, getting physical exercise and growing spiritually by connecting and getting in tune with nature: the real essence of farming.”

Working with Prosperity Market has provided her with benefits she did not anticipate. Battle, who runs the business with her 31-year-old husband, Raylion Ward, met “Euphoria” actress Nika King, who asked her for a garden consultation, and she ended up custom-building King’s indoor raised flower beds and a compost box. In addition, Battle has received monetary donations from California Rep. Maxine Waters and the nonprofit Tony’s Treehouse.

When Battle first began vending at Prosperity Market, she was able to bring in five to 15 pounds of produce that she grew in her small urban farm in her backyard. As her business grew, her father-in-law offered his backyard and now she brings twice as much produce to the pop-ups.

Battle is thankful she has Dianne and Still in her corner. “You will see miracles in your life, and I am a walking miracle because so much abundance and outpouring of support has been dumped on us like a dump truck,” she said.

As part of its one-year anniversary celebration, Prosperity Market will be hosting a large pop-up event, with 30-plus vendors, from 11 a.m. to 3 p.m. on Feb. 26 at the California African American Museum (CAAM) in Exposition Park, 600 State Drive.