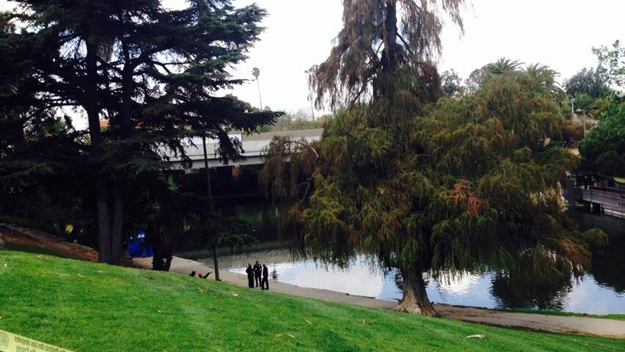 “This $5 million Clean California Grant is an incredible win for the city of Los Angeles — but an even bigger victory for the community of Boyle Heights,” de León said Friday morning at the park alongside state Sen. Maria Elena Durazo and Assemblyman Miguel Santiago . “These are park investments long overdue for Boyle Heights.”

In December De León, joined by state legislators, announced that his district would receive $8.27 million for major renovations to Hazard Park and $8.5 million for the park that will be developed underneath the Sixth Street Viaduct, which is being built to replace the previous bridge that connected Boyle Heights with downtown Los Angeles.

The $588 million bridge, which is expected to be completed this summer, was designed by LA architect Michael Maltzan and will resemble a “Ribbon of Light” with 10 sets of arches that light up at night.

A 12-acre park underneath the bridge will accompany the new viaduct and will provide access to the LA River, public art, recreational programming and more.

According to the Bureau of Engineering’s plans, the downtown side of the Sixth Street Viaduct park will include a rain garden, planted seating area, a play and performance lawn, a sculpture garden, a meadow, a dog play area, an adult fitness section, cafe and restrooms, a sloped river gateway, an urban forest and terraces.

On the Boyle Heights side, the park’s plans include a skateboard area; a meadow; a picnic area; a synthetic turf soccer field; flexible courts sized for basketball, futsal — a game similar to soccer played on a hard surface — and volleyball; a play and performance lawn; a children’s play area; a promenade a landscaped seating area; an adult fitness area; a rain garden; a dog play area and grilling spaces.

The Start of the COVID-19 Pandemic in SoCal, 2 Years Later – NBC Los Angeles