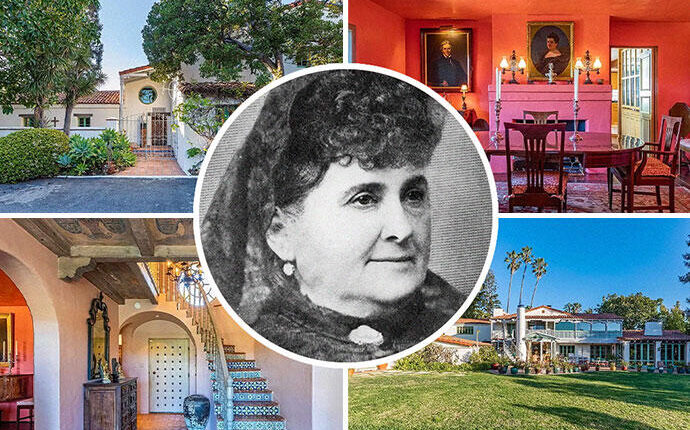 An historic, one-acre Santa Monica estate is on the market for $22 million.

David Offer of Berkshire Hathaway HomeServices listed the home earlier this month, according to Zillow.

Built in 1924 with a Spanish architectural style, the home features thick plaster walls, stenciled beamed ceilings, hand-painted tiles, original hardware and seven fireplaces. A swimming pool also is on the property, which features landscaping such as rolling lawns and walking paths.

The home has not changed hands for 64 years. It’s been the compound for the same family since 1958, according to an email from David Offer’s office. The buyer for the last sale listed for this home in 2019 was Carolina M. Barrie, a descendant of the family of Arcadia Bandini Stearns de Baker, according to public records and media reports.

Bandini de Stearns Baker became a force in business and social circles in Southern California in the late 19th and early 20th centuries, with her Latino heritage providing a bridge between her ethnic community and the interests of her two husbands, Abel Stearns and Colonel Robert S. Baker–both White and prominent business owners. She amassed a large fortune and estate through her two marriages–she was widowed in both–and became a mover and shaker known for civic philanthropy and social gatherings that helped define the upper reaches of local society of the day, becoming known as the “Godmother of Santa Monica.”

Bandini de Stearns Bake had no children and left her fortune to various charities. She donated land for disabled veterans that has been developed into the sprawling West LA Veterans Administration compound. . Bandini Boulevard and Stearns Street are named after branches of her family.