Heavy rain is forecast for California early next week 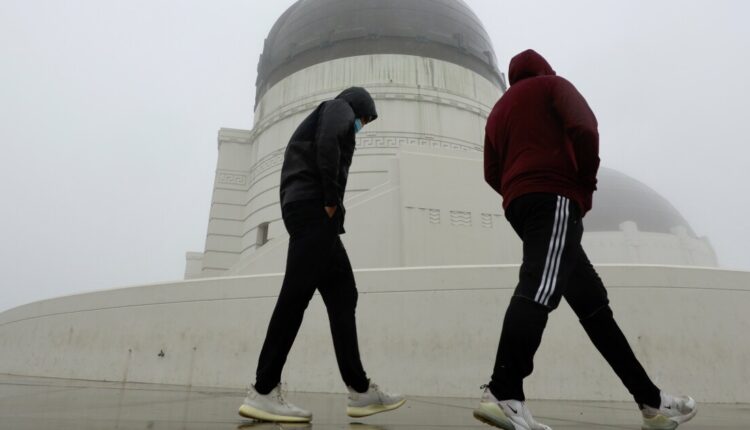 Light to moderate rainfall in Southern California on Thursday could pave the way for a much stronger Pacific storm early next week, forecasters said.

The drizzle is expected to bring about a quarter of an inch of rain to the Los Angeles area on Thursday – just a little more than total rainfall earlier this week – and wear off by early evening.

The maximum temperatures will “even reach 60 degrees” and be up to 8 degrees below normal, said the National Weather Service.

In the afternoon, cool conditions in some areas contributed to a welcome influx of snow, with residents reporting powder snow in the mountains near Big Bear. The weather service reported that snow depths had dropped to 4,500 feet in some areas.

Officials said the rest of the week should be relatively calm, apart from the possibility of night frosts and a frost in Antelope Valley and other interior areas.

But all eyes are on next week when “the most significant storm of the season” is expected to sweep the region, forecasters said. The strong Pacific storm could tie in with an atmospheric river that could cause heavy rainfall and significant snowfall in the mountains.

Officials said Thursday that rainfall could be two to three times higher than the October storm that caused a deluge across the state.

The storm is expected to hit southern California Monday through Wednesday, the National Weather Service said. The coast and valleys could receive 1 to 3 inches of rainfall by Tuesday night, with 3 to 5 inches of rainfall possible in the foothills and mountains by Tuesday evening. Most rainfalls can be expected on southern slopes.

The jet stream or storm track continues a wet pattern in California and the west.

Precipitation rates are not certain, but at least moderate rain is likely, with heavy rain possible at times. The best chance for heavy rain will come Monday afternoon into the evening, said meteorologists.

Such rainfall could lead to localized flooding and the risk of flash floods and mud and debris flows in the scars of forest fires.

The snow in the mountains of Southern California is expected to decrease rapidly on Tuesday with the arrival of colder air. At resort levels – 7,000 feet and above – 2 feet or more of snow will likely accumulate. Snow build-up below the resort level depends on when the colder air is arriving.

Next week’s storm will come from the Gulf of Alaska and be a lot colder with more energy than Thursday’s system, said Alex Tardy of the National Weather Service in San Diego. The storm will fall south over the eastern Pacific and will be a slower system. Before moving east on Tuesday, it could tap a tropical cloud of moisture from the south in the form of an atmospheric river.

“We have two things to ourselves with this storm,” said Tardy. “It’s a big, deep storm that is moving slowly, but it may also be bringing in significant moisture from the south.”

The atmospheric flow is said to be the most significant in all of central and northern California, from Monterey County to Mendocino County, said Eric Boldt of the Oxnard Weather Service.

In Northern California, the cold origin of the low pressure system in the Gulf of Alaska has the potential for very heavy mountain snow, forecasters say, with possible accumulations in the foothills and in the far northern Sacramento Valley.

The extended outlook requires cool, below-average temperatures in the west and a well above-average rainfall potential for central and southern California.

November was unusually warm in Southern California, with record temperatures in the mountains and inland deserts. Most places had no rainfall during the month. According to the US Drought Monitor, the state continues to be affected by extraordinary to extreme drought. Most of Southern California’s areas are less than 50% of the water year average, which began on October 1.

Regarding the likelihood of atmospheric river conditions, Tardy said it wasn’t uncommon to see such a storm in December, although “we didn’t see any last year and hardly any the year before”. Atmospheric flows of this size and intensity occur every few years, he said.