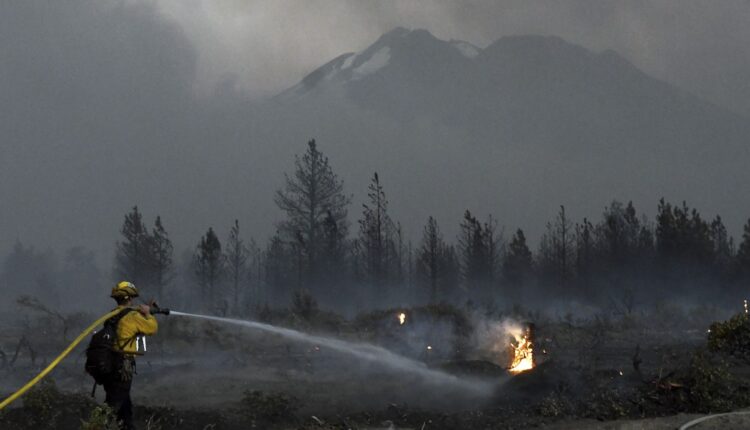 I had planned to dedicate this room to fireworks, which around the July 4th holiday each year lead to complaints from letter writers saying that these seasonal disturbances have become an eternal plague in Los Angeles, much like wildfires. But since there are indeed fires burning in areas north of the 40th parallel, burned by a veritable heat wave from Hell, it seemed more appropriate to highlight letters talking about drought, high temperatures, and other flashing indicators of the self of humanity. Impoverishment through climate change.

The Times has seen no shortage of articles on the subject lately, including a report on the drought-weakened Russian River in Sonoma and Mendocino counties and an editorial on the Pacific Northwest heat wave. Things are dry, as is often the case in Los Angeles at this time of year, and the heat is elevated but not nearly unbearable – and certainly not like the 121 degrees seen in British Columbia this week. Nevertheless, the extraordinary heat in parts of the west, to which some Angelenos are fleeing for cooler weather, and the warnings of drought-ridden vegetation in our home mountains are putting us on high alert.

Reading about it might even help with our illegal fireworks problem.

To the editor: The heat wave that flooded the Pacific Northwest has been dubbed a “1000 Year Event”. Good luck with it.

As the ever hotter future that humanity has burned into the climate unfolds, regional heat and other climate emergencies won’t even be 1,000-month events – that’s 83 years. Unfortunately, this week’s super heat wave in the north won’t wait until 2104 to repeat itself.

Realistically, these horrors won’t even be 1,000 week events. Does anyone seriously believe that the next heat emergency to hit our northern neighbors won’t happen again before 2040?

To the editor: When it comes to global warming, adaptation is surrender, and civilization is doomed to death by heat.

There’s an old folk song about a truck going down the mountain to Scranton with a load of bananas and losing its brakes. It doesn’t get any better on the way down. There is drama but no tension.

It is similar with global warming. We have to be on our way to stop it. We’re in trouble already.

In 2009, like today, around 80% of our energy came from fossil fuels. We have made no forays into fossil fuel dominance.

To think that, in this era of environmental crisis, we are being led by politicians, lawyers, and scribblers in the context of a pernicious propaganda campaign that leaves people in the dark about what lies ahead is appalling. We fight for our children’s lives.

Forty years ago, a glide path to a carbon-free future was both realistic and affordable. But now, the money that should go into prevention is instead being sucked up through disaster recovery and adaptation. Prevention is still waiting in the queue.

To the editor: As Sarah Jaquette Ray emphasizes in her comment: “You can use your climate fear for immense good. The planet needs you in order to be resilient and not to be fearful to the point of weakening. ”

People with climate fear are not the problem. When it comes to “fear to the point”, GOP politicians are the problem. You must stop fearing the retribution of the Make America Great Again crowd.

Just like COVID-19 didn’t go away and Donald Trump didn’t win the elections, climate change is no joke. GOP politicians need to face the facts and take action to address the climate crisis, starting with laws that price carbon.

To the editor: I am often ignored when I talk about the causes of climate change and what we should do to reduce it.

A wealthy friend of mine spends three months a year on leisure trips around the world. He understands the causes of climate change, but is not to blame for his contribution. With only a few years left to live, he didn’t care.

Fortunately, with COVID-19 becoming less of a problem, cruise lines are back in business and producing carbon dioxide. Conclusion: capitalism and climate change are incompatible. It’s about money, jobs, and fun.

To the editor: Thanks to reporter Diana Marcum for her report on the devastation of the Russian River by climate change.

The river with fires, floods, droughts and people moving away makes it another building block in the climate denial wall. The article caught me dreaming of selling my Orange County house and moving to Marin or Sonoma.

Now it will most likely be the stuff of nightmares – drowning in floods, being burned by fire, living in a ghost town, and imagining the wet half of the country saying California deserved its climate change problems. Pick any reason; they used them all. They want their godly representatives of California to stop attempts to reduce our impact on the climate.

To the editor: Why wait for the mandatory water saving? It’s time to stop pretending we live in a place where green grass is normal.

Let’s rethink our landscaping and use plants that actually belong here – California native people. Let’s turn off our home irrigation systems, especially the ones that send streams of precious water onto streets and down rain drains.

If you think artificial grass will solve the problem, forget about it. Artificial grass only makes things hotter and ultimately contributes to plastic pollution.

I started to educate myself. You can do the same with information from the California Native Plant Society. We can save water and the California we love, but only if we try.