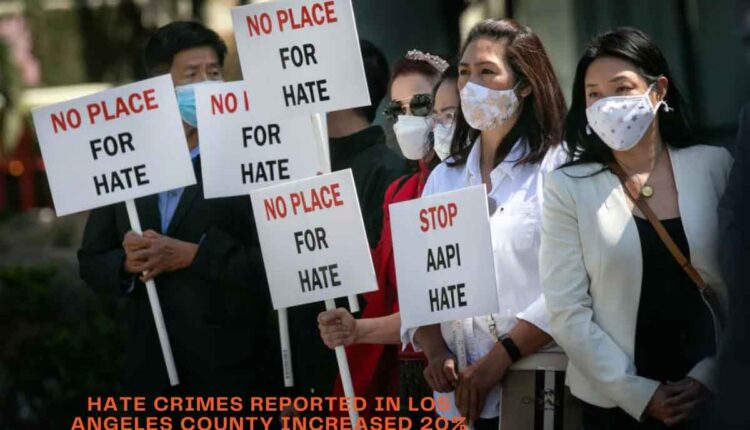 The pandemic was an absolute nightmare for everyone, but as always, racial minorities face open discrimination with an influx of hate crimes and racial violence.

When the coronavirus entered our lives as a deadly disease, the media set out to research its origin. With the first case in Wuhan, the rumors went the wrong way. The coronavirus was a mystery, and people claimed that this disease was an artificially configured strategy to control the world’s population.

The virus, which originated in Wuhan, turned the Chinese into perpetrators in the eyes of haters. This began a series of unfortunate incidents in which Asians around the world became the target of insensitive, bigoted behavior.

Hate crimes reported in Los Angeles will increase in 2020

Hate crimes reported in Los Angeles are increasing day by day, and reportedly rose to 635 in the past year, the highest level in 12 years, the LA County’s Human Relations Commission reports.

A significant increase in hate crimes reported in Los Angeles was due to the high percentage of racial crimes. Not only Asians but also blacks and Latinos have become major targets of hate crimes. This increase reflects the brisk intensity of racial crime, which has increased over the past year.

In 2020, anti-Asian hate crimes increased 76% as racial ostracism during COVID 19 sparked more verbal and physical attacks. Of the cases reported to the district, an increase in physical violence of 58% was found from 2018.

Racial crime used to make up 48% of all hate crimes, but now it’s 61%, which is very problematic. People of color make up a much smaller portion of the American population compared to Caucasians.

However, the situation is reversed when it comes to the percentage of black people among the victims of racist crimes. 42% of racist hate crimes reported in Los Angeles were against black people, that’s just 9% of the county’s residents.

LGBTQ people were also among those targeted for their sexual orientation. The lower acceptance of these people has increased the crimes against them by 17%.

Of the 17%, 84% of targeted hate crimes involved gay men. However, crimes against transgender people seem to have decreased slightly, as they fell from 42% to 32%.

The Commission’s Executive Director Robin Toma discussed the new study, stating that it “exposed an outbreak of hatred that kept breaking records”.

Robin said the pandemic sparked a new wave of hatred and malice against Asian Americans as people mistakenly blamed them for the height of the spread of the coronavirus disease. It was terrifying to see the world succumb to hatred in such difficult times.

Surprisingly, there were still far more crimes against Asian Americans in the 1990s and early 2000s than there was in last year. Among the hate crimes reported, 13% were religious crimes, which was 18% less compared to previous results. Most of them were anti-Semitic crimes.

What does the district chief think about the rise in hate crimes?

District Leader Janice said the pandemic is an example of the deeply laid out problems facing our society. In such adverse times, with death tolls rising and people grieving for the loss of loved ones, affected families have grieved to deal with the worrying increase in hate crimes.

The numbers only show the crimes that people register with law enforcement agencies. According to the US Department of Justice, those rising numbers are appalling, as more than half of hate crimes go unreported.

Unfortunately, we are about to become an intolerable community, which is shameful indeed.