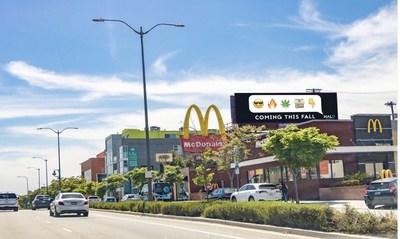 /Not for Distribution to U.S. Newswire Services or For Dissemination in the United States/

Scheduled to open in the fourth quarter of 2021, the Westwood Dispensary will be the Company’s first of three planned dispensaries for Southern California and a key first step towards achieving the stated goal of opening ten dispensaries by the end of 2022. (CNW Group/Halo Collective Inc.)

The Westwood Dispensary is strategically located on Santa Monica Blvd within a mile of the University of Los Angeles California (“UCLA”) campus and blocks away from Century City. (CNW Group/Halo Collective Inc.)

TORONTO, Sept. 11, 2021 /CNW/ – Halo Collective Inc. (“Halo” or the “Company”) (NEO: HALO) (OTCQX: HCANF) (Germany: A9KN) today announced that it has begun construction of a new retail dispensary in Westwood, Los Angeles (the “Westwood Dispensary”), after receiving all necessary local building permits. Scheduled to open in the fourth quarter of 2021, the Westwood Dispensary will be the Company’s first of three planned dispensaries for Southern California and a key first step towards achieving the stated goal of opening ten dispensaries by the end of 2022.

The Westwood Dispensary is strategically located on Santa Monica Blvd within a mile of the University of Los Angeles California (“UCLA”) campus and blocks away from Century City. There is daily traffic of over 161,000 vehicles within three blocks, primarily on Santa Monica Blvd. and Westwood Blvd. This prime location features ample parking on the street front and an adjacent parking lot. Westwood is a central regional district for shopping, dining, movie theaters, and other entertainment, and Century City is one of the most prominent employment centers in the Los Angeles metropolitan area, boasting a workforce of approximately 244,000. In addition, the Westwood Dispensary is within a mile from the boutiques on Rodeo Drive in Beverly Hills, well-positioned to attract tourist traffic. The address of the Westwood dispensary site is 10461 Santa Monica Blvd.

The Westwood Dispensary represents a critical step in the vertical integration for Halo in its “Seed to Sale” strategy in California. Upon opening, Halo expects to commence direct-to-consumer retail sales of its own branded and white-labeled cannabis products, as well as a curated selection of coveted brands and products available in the California market.

“Halo is committed to entering the large and growing Southern California retail market and is proud that our first operating dispensary will be the closest dispensary to Century City and the tourist sections of Beverly Hills,” said Kiran Sidhu, CEO and Co-Founder of Halo Collective. “We are simultaneously developing two other locations in Hollywood and North Hollywood, that are both ideally situated, which we expect to open later this year or early next. With these three stores, we are building a key element of our vertically integrated seed to sale model, which we expect to drive strong returns for Halo shareholders.”

Halo is a leading, vertically integrated cannabis company that cultivates, extracts, manufactures, and distributes quality cannabis flower, oils, and concentrates and has sold approximately eleven million grams of oils and concentrates since inception. The Company continues to expand its business and scale efficiently, partnering with trustworthy leaders in the industry who value Halo’s operational expertise in bringing top-tier products to market.

Halo currently operates in the United States in Oregon and California, Canada, Southern Africa in the Kingdom of Lesotho, and the United Kingdom. The Company sells cannabis products principally to dispensaries in the U.S. under its brands Hush, Mojave, and Exhale, and under license agreements with Papa’s Herb®, DNA Genetics, Terphogz, and FlowerShop*, a cannabis lifestyle and conceptual wellness brand that includes G-Eazy as a partner and key member.

As part of continued expansion and vertical integration in the U.S., Halo boasts several grow operations throughout Oregon and two planned in California. In Oregon, the Company has a combined 11 acres of owned and contracted outdoor and green house cultivation, including East Evans Creek, a six-acre grow site in Jackson County with four licenses owned and operated by Halo and two third-party licenses under contract to sell all of their product to Halo; Winberry Farms, a one-acre grow site located 30 miles outside of Eugene in Lane County with a license owned and operated by Halo; and William’s Wonder Farms, a three-acre grow site in Applegate Valley, under contract to sell all of its product to Halo pending the closing of Halo’s acquisition of its licenses and business assets. Halo has recently signed a Definitive Agreement to acquire Food Concepts. Food Concepts LLC is the master tenant of an approximately 55,000 sq.ft. indoor cannabis cultivation, processing, and wholesaling facility in Portland, Oregon operated by the Pistil Point entities (the “Pistil Point Acquistion”).

In California, the Company is building out Ukiah Ventures, a planned 30,000 sq. ft. indoor cannabis grow and processing facility, which will include up to an additional five acres of industrial land to expand the site. Recently, Halo partnered with Green Matter Holding in California to purchase a property in Lake County, developing up to 63 acres of cultivation, comprising one of the largest licensed single site grows in California. Halo also plans to expand its operations in California by opening three dispensaries in North Hollywood, Hollywood, and Westwood, one of which may serve as the first FlowerShop* branded dispensary.

In Canada, Halo acquired three KushBar retail cannabis stores located in Alberta as a first in its planned entry into the Canadian market, leveraging its Oregon and California brands. With the KushBar retail stores as a foundation, the Company plans to expand its foothold in Canada.

Halo has also acquired a range of software development assets, including CannPOS, Cannalift, and, more recently, CannaFeels. In addition, Halo owns the discrete sublingual dosing technology, Accudab. The Company intends to spin-off these assets and its intellectual property and patent applications into its subsidiary Halo Tek Inc. and expects to complete a distribution to shareholders on a record date to be determined by Halo.

Halo has recently announced its intention to reorganize its non-U.S. operations into a newly formed entity called Akanda Corp., whose mission will be to provide high-quality and ethically sourced medical cannabis products to patients worldwide. Akanda will seek to deliver on this promise while driving positive change in wellness, empowering individuals in Lesotho, and uplifting the quality of the lives of employees and the local communities where it operates, all while limiting its carbon footprint. Akanda will combine the scaled production capabilities of Bophelo Bioscience & Wellness Pty. Ltd., Halo’s Lesotho-based cultivation and processing campus located in the world’s first Special Economic Zone (SEZ) containing a cannabis cultivation operation, with distribution and route-to-market efficiency of Canmart Ltd., Halo’s UK-based fully approved pharmaceutical importer, and distributor that supplies pharmacies and clinics within the U.K. With a potential maximum licensed canopy area of 200 hectares (495 acres), Bophelo has scalability that is arguably unmatched in the world today.

For further information regarding Halo, see Halo’s disclosure documents on SEDAR at www.sedar.com

This press release contains certain “forward-looking information” within the meaning of applicable Canadian securities legislation and may also contain statements that may constitute “forward-looking statements” within the meaning of the safe harbor provisions of the United States Private Securities Litigation Reform Act of 1995. Such forward-looking information and forward-looking statements are not representative of historical facts or information or current condition, but instead represent only Halo’s beliefs regarding future events, plans or objectives, many of which, by their nature, are inherently uncertain and outside of Halo’s control. Generally, such forward-looking information or forward-looking statements can be identified by the use of forward-looking terminology such as “plans”, “expects” or “does not expect”, “is expected”, “budget”, “scheduled”, “estimates”, “forecasts”, “intends”, “anticipates” or “does not anticipate”, or “believes”, or variations of such words and phrases or may contain statements that certain actions, events or results “may”, “could”, “would”, “might” or “will be taken”, “will continue”, “will occur” or “will be achieved”. Forward-looking information may relate to anticipated events or results including, but not limited to Halo’s future plans regarding its Westwood Dispensary, other dispensaries in the City of Los Angeles, Halo’s expectations regarding the expansion of processing, production and distribution operations and the financial performance thereof, the closing of the Pistil Point Acquisition, the expected size and capabilities of the final facility planned at Ukiah Ventures, the size of Halo’s planned cultivation facility in Northern California, the ability of Bophelo and Canmart to serve the U.K. market, the proposed spin-off with Halo Tek Inc. and Halo’s proposed plans to re-organize its non-U.S. operations via Akanda Corp.

Scheduled to open in the fourth quarter of 2021, the Westwood Dispensary will be the Company’s first of three planned dispensaries for Southern California and a key first step towards achieving the stated goal of opening ten dispensaries by the end of 2022. (CNW Group/Halo Collective Inc.)