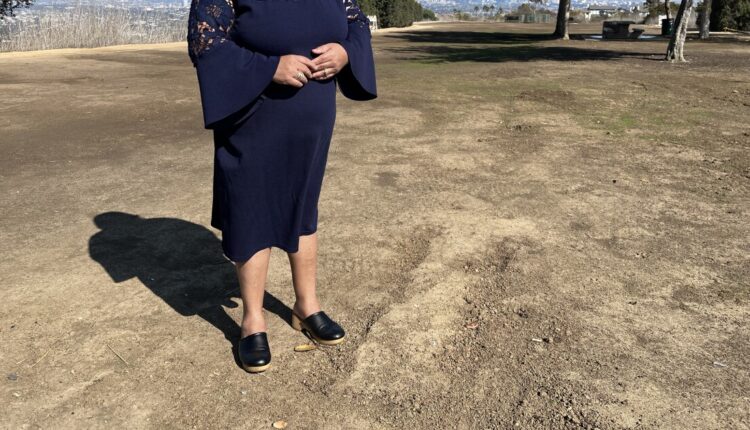 Georgia Horton grabbed the hem of her dark blue dress and awkwardly tossed one leg and then the other over a concrete bench up in the Kenneth Hahn State Recreation Area.

“This is where I take all the reporters,” she said with a sarcastic smile as she made herself comfortable at the picnic table. “It’s peaceful, isn’t it?”

I had to laugh.

In the months since I wrote about Horton during the darkest days of the pandemic, she said she met with a parade of reporters everyone wanted to know about her participation in the Compton Pledge guaranteed income program.

And she continues to tell her story.

How she grew up poor in Bakersfield and was molested as a child. How she spent decades in prison, found religion and became an evangelist. How she moved to Compton after her release and struggled to make ends meet when the economy collapsed due to COVID-19.

And how the few hundred dollars she now receives every month – unconditionally – has taken her from the brink of eviction to a budding career as a motivational speaker with her own nonprofit.

With each tale, Horton has continued to embrace her role as a guaranteed income spokesperson. “A figurehead,” she likes to joke.

But she knows it’s not just about her story. It so happens that in the months she has been telling it, several mayors have put on a big show by launching publicly funded guaranteed income programs in their own cities.

Los Angeles is only the latest when Mayor Eric Garcetti announced more details about the Guaranteed Basic Income: LA Economic Assistance Pilot or BIG: LEAP last week. Approximately 3,200 low-income households are paid $ 1,000 per month for a year. Applications are now being accepted.

Also last week, Chicago announced it would distribute monthly payments to low-income residents, with Mayor Lori Lightfoot boasting that her city will have “the largest pilot program in the country.”

In fact, each subsequent announcement seems to be designed to outperform the last, with cities clearly competing with each other to be considered the most money to most people.

Yes, it is a shameless signal of virtue. But it’s also evidence of how what began as a controversial experiment in Stockton in 2019 under then-Mayor Michael Tubbs has quickly become one of the politically most popular – and effective – tools for dealing with the economic upheaval of the pandemic. That’s why mayors like to talk about it.

What mayors talk less about is how their guaranteed income frenzy has spawned a new industry – from nonprofit executives and consultants promoting best practice at symposiums to organizations helping cities select recipients, run their programs, and data to collect.

For example, there is the Fund for Guaranteed Income. Led by Nika Soon-Shiong, daughter of Los Angeles Times owner Patrick Soon-Shiong, it’s the charity behind donor-funded Compton Pledge and has been tapped from Chicago to help manage its program.

There is also the Academic Center for Guaranteed Income Research, which works with Los Angeles and many other cities that have started programs under the Tubbs Mayors for guaranteed income.

Horton shakes his head in amazement at how complicated guaranteed income has become and how far it is from people. While grateful for the steady flow of money through the Compton Promise, she worries about what’s next for those who have come – and will come to rely on.

“You all brag about how much you donate,” she said of the mayors and their speeches. “But what happens when it’s over?”

The question of sustainability is often raised by critics in relation to guaranteed income, although early research showed that such programs can help lift Americans out of poverty for good.

However, some cities are not taking any chances.

In LA, for example, the agencies selected for BIG: LEAP are referred to agencies that offer financial coaching. Other guaranteed income programs, including in the Bay Area, offer the same. Participation is voluntary.

Horton admits she did many things the hard way, including how to start her nonprofit Georgia Horton Ministries.

But after she submitted the paperwork – with the money she saved from her monthly Compton Pledge Fellowship – it led to a number of new speaking engagements, including from the Word Network and TD Jakes Ministries. She has also written a book that tells her story of overcoming trauma.

“With this transition came many different responsibilities,” she said. “But it also came with a completely different mindset.”

It is this new mindset that Horton hopes will embrace the upcoming class of guaranteed income recipients in LA sooner rather than later. As an evangelist, she has ticked off the lessons she learned.

First, open a savings account to combat the urge for instant gratification.

“There will never be a good time to save in your head – in this poverty mentality – because need will always be present,” said Horton. “Anyone who waits to save due to a lack of need will never save. So now you have to decide: If I’ve lived without it for so long, why can’t you live without it now? “

Second, keep your old friends, but make new ones.

“Bring someone with you who will think wherever you want on the plane. Because what is going to happen is that while you bring in someone who thinks on that level, when you talk to them, you get new ideas. “

And third, don’t forget to take care of yourself mentally and physically to avoid impulse buying.

“To help you make better decisions about your funding, amid this pandemic, you should do some self-care to change your feelings in healthy ways,” she said. “If you don’t, then you’ll find some kind of outside something that you can bring in to try and feel better.”

This is Horton’s story, and as long as people ask, she will keep telling it.

‘Covid Hit Us Over the Head With a Two-by-Four’: Addressing Ageism With Urgency