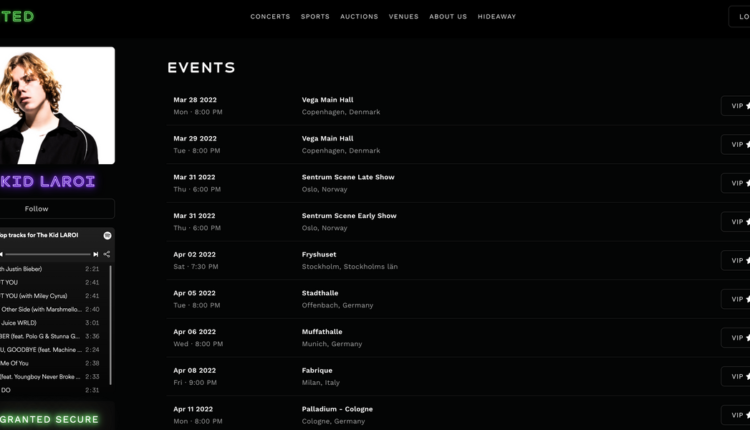 Hesari and Matt Ampolsky began working on the idea for an “experimental” ticket platform during the summer of 2020, when concerts and sporting events were canceled en masse. But Hesari said they never doubted that fans would return to venues once it was safer to do so. In the meantime, they hired developers to build Granted, the Santa Monica-based ticketing platform that publicly launched Tuesday.

“There should have been a lot more concern, but I think we were just on a mission,” Hesari quipped. “Personally, I’m just a massive risk-taker when it comes to disruptive spaces.”

Granted, which is soft-launched in February 2021, aims to disrupt the ticketing industry in a number of ways. Beyond selling tickets to shows, the startup offers fans VIP experiences such as meet-and-greets with artists and athletes, and hosts auctions that benefit a charity of a given talent’s choice. Granted also accepts cryptocurrency as payment and has minted NFTs, or non-fungible tokens, for athletes like NFL running back Saquon Barkley.

The company also announced Tuesday that it raised a $3 million seed investment from Ampolsky, who doubles as Granted’s co-founder and angel investor. (Ampolsky is an entertainment industry investor who also serves as CEO of Santa Monica-based events agency Confirmed360.) Among other things, the money will be used to grow the Granted’s seven-employee staff and build a marketplace where fans can resell tickets. Currently, the tickets offered on Granted are funneled from third-party companies used by ticket brokers.

Online ticket sellers were hammered during the early days of the pandemic; the industry saw a nearly 56% drop in revenue in 2020, according to market research firm IBISWorld. Yet online ticket sales showed signs of a rebound during the second half of last year, as vaccines rolled out and governments lifted restrictions. Ticketmaster, owned by Beverly Hills-based Live Nation, reported its highest-ever quarterly operating income in the third quarter of 2021, after posting a $197 million loss in the year-earlier period.

“I think [ticket retailers] will recover to the pre-pandemic levels—and probably even go higher, because people have been tied down so much,” according to Gerard Tellis, a professor at the University of Southern California’s Marshall School of Business. “But a lot depends on the intensity of COVID.”

Granted has generated nearly $500,000 in gross sales since soft-launching last year; it plans to triple that figure this year through the VIP partnerships it has lined up alone, Hesari said, including events with rapper The Kid LAROI and the actor Rotimi. Among others, Granted has previously worked with former Los Angeles Lakers star Shaquille O’Neal on an auction, and it offered VIP packages for last year’s boxing exhibition between retired ex-champion Floyd Mayweather and YouTuber-turned-fighter Logan Paul.

The company ultimately aims to develop a secondary ticket market that pays royalties to artists. Hesari noted that many artists make the bulk of their money through touring these days—and though many artists make a very healthy living that way, she added that the amount they collect from their events is smaller than you would think after ticketing agents and other third parties get their cut.

“It’s really important for us to continue to make [artists] feel both motivated and empowered by their fans,” she said.