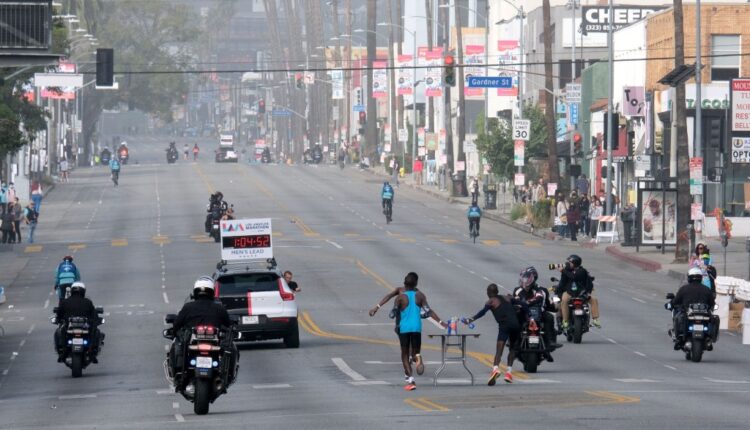 The 37th Los Angeles Marathon, sponsored by Asics, is March 20 from Dodger Stadium to the finish line in Century City.

The “Stadium to the Stars” route — 26.2-miles — wends its way from the stadium in Los Angeles through the neighboring cities of West Hollywood and Beverly Hills. The finish line is on Avenue of the Stars, near Santa Monica Boulevard, in Century City, a business district and neighborhood in Los Angeles.

Last year’s marathon, the first “Stadium to the Stars,” was held on Nov. 7 due to Covid-19 concerns earlier in the year.

Over the years, the LA Marathon has had different courses, including 2007-2008’s start in Universal City in the San Fernando Valley. The decade-long route with the catchy name “Stadium to the Sea” from 2010 to 2020 ended at Ocean Avenue in Santa Monica.

Here are the freeway ramps and street closures to be aware of on March 20.

Drivers should anticipate delays, plan ahead and use alternate routes.

Street closures along the route begin at 4 am on Sunday. The marathon’s course is closed to vehicular traffic for six hours and 30 minutes beginning after the last runner has crossed the start line at Dodger Stadium.

The marathon gets under way at 6:30 am with wheelchair and handcycle participants and athletes with disabilities, followed by the elite women, 6:45 am, and then the elite men and general field start at 6:55 am and will go into the early afternoon.

Parking will be prohibited along the marathon route. No parking signs will be posted prior to the event.

Spectators looking for parking during the marathon in West Hollywood will find a directory of municipal lots and parking structures online. Find parking options here: bit.ly/3J6q6M9

Streets closed from 4 am to 2 pm in West Hollywood:

The Beverly Hills segment of the marathon, miles 16-17, enters at Doheny Drive, and participants run west on Burton Way to Rodeo Drive, then run south on Rodeo to Wilshire Boulevard, and then west to Santa Monica Boulevard.

Streets closed from 5 am to 1 pm in Beverly Hills:

Also, there will be a detour in effect until 5 pm March 20 on the western border of Beverly Hills at Wilshire and North Santa Monica boulevards and also at Moreno Drive and South Santa Monica Boulevard.

Details on the route in Beverly Hills, street closures and a map: www.beverlyhills.org/citymanager/newsroom/lamarathonreturnssundaymarch202022/

Spectator access will be limited on Avenue of the Stars from Santa Monica Boulevard to Constellation Boulevard. The final approach to the finish line will be closed to all spectators and non-credentialed public.

Race results and photos will be posted here: www.mccourtfoundation.org/pages/la-marathon-results-and-photos

Details on the LA Marathon: www.mccourtfoundation.org/pages/los-angeles-marathon-2022-registration