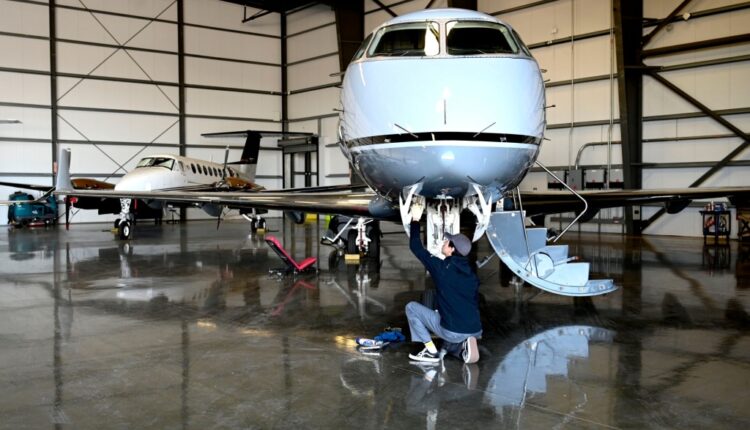 Just down the street from SoFi Stadium, a stone’s throw from LAX and neighboring rocketbuilder Space X, Levi Stockton stood among a shiny fleet of private jets inside a hangar at Advanced Air, where his company operates private charter flights, among an array of services, at Hawthorne Municipal Airport.

On this day — a little more than a week before Super Bowl LVI — things are relatively quiet here, save for the occasional thunder of a Gulf Stream taking off or the chop/chop of a small helicopter approaching, as he walked out onto the edge of the small airport’s 4,956-foot-long runway.

But come next week at this time, as the iconic game draws nearer, this place — which has been in business for 17 years — will be buzzing like never before.

Hollywood Park and the ubiquity of events and business that draw people to LA have always been a source of customers for Stockton’s firm. But the Super Bowl is, ahem, a whole new ball game.

“This is one of the biggest events in the world. We’ve been planning for this for over a year. And we anticipate it being the busiest it’s ever been,” said Stockton, the founder and president of Advanced Air, which also owns and operates Jet Center Los Angeles.

Aviation officials are expecting up to 1,100 more general aviation flights in the region between Feb. 6 and Feb. 14, as high-paying (and high-flying) clientele soar into the region from around the country. That means hundreds more landings and takeoffs at the several Southern California airports — large and small — that dot the region.

Private jets, single-engine aircraft of all varieties — you name it, the jet-setters, the VIPs, the chartered flights — will be landing at smaller air hubs from the South Bay to the San Fernando Valley to the Inland Empire and Orange County as part of a Super Bowl bonanza expected to generate between $234 million and $477 million in economic benefits, including between $12 million and $22 million in regional tax revenue, according to one estimate.

“It’s huge,” said Ross Aimer, CEO Aero Consulting Experts, reflecting on the overall impact. “If you can imagine, there are people coming from all over the world to watch the Super Bowl. It’s not only local people. It’s a big deal. Same thing for airlines. There will be a lot of people from all over the country. It does make a difference. Business, hotels, everything else is involved in this and impacted.”

And for local air carriers that specialize in general aviation flights, it’s a boon, of course. It is not unusual for private jet passengers to dish out $5,000 to $10,000 per flying hour depending on the size and kind of jet they book, and if you want to get really fancy in the $20,000 range for something like a long-range Boeing business jet , decked out with bedrooms, bathrooms and your own personal beach (just kidding, no beach).

How to manage the traffic? It takes planning and lots of it. “It’s about striking a fine balance between the security this requires and business’ bottom lines,” Aimer said.

For months, airports have been working with the FAA and the NFL to ensure air traffic to the giant game stays manageable — and safe.

Much of that coordination has centered around a reservation system for aircraft parking at mammoth LAX as well as smaller airports Van Nuys, Hollywood-Burbank, Long Beach, Hawthorne, John Wayne in the OC and Ontario, officials said.

Even the Inland Empire will come into play “SBD International Airport plays an important and increasing role in the Southern California region,” said Amber Casarez, spokesperson for the airport. “We are anticipating additional air traffic during the week leading up to Super Bowl.”

For instance, at Hawthorne, Hunt and her staff are preparing five arriving slots and five departure slots every hour beginning Feb. 9 for the private aircrafts flying in and out. Similar booking allotments are in place at other airports, depending on size and traffic expectations and air curfews.

At Long Beach Airport, officials are preparing for big increases on the commercial and private side.

“Specifically, the Monday after the Super Bowl, we expect will be the busiest day for the airport,” said Kate Kuykendall, spokeswoman for Long Beach Airport.

At Van Nuys Airport — long a hub for the jet-setting crowd, it’s part of Los Angeles World Airports along with LAX — 350 more arrivals are expected from Feb. 6 to Feb. 14.

“It is difficult to say how many are directly related to the Super Bowl since all flights during this period require a reservation,” said LAWA spokesperson Diana Sanchez.

Nevertheless, Van Nuys, too, has also been working within the FAA Super Bowl reservation system.

That demand is not limited to runways in the immediate vicinity of the game. In fact, “vicinity” is all relative, depending on where you’re arriving from.

“This is the kind of event that drives a great deal of corporate and private-jet traffic,” said Steve Lambert, spokesperson for Ontario International Airport. “Though we haven’t seen that yet, we’re certainly available and prepared for any increase in demand.”

FAA officials say they expect to begin seeing increased air traffic beginning late next week, culminating in a Temporary Flight Restriction — known as a TFR — in the Los Angeles area on Sunday, Feb. 13. That means, for security and safety reasons, certain flights — such as gliders, flight training aircraft and drones — will be prohibited or limited, and access to airports will itself be limited before, during and after the game.

The FAA has already been warning pilots to be prepared for the chance of rerouting, altitude restrictions and ground delays during heavy demand periods in an area that spans from Las Vegas to San Diego to LA

A “No Drone Zone” will also limit flights around SoFi Stadium before, during and after the game, according to the FAA.

A woman checks the departure and arrival screens at LAX on Thursday, Dec. 16, 2021. (File photo by Brittany Murray, Press-Telegram/SCNG)

Aimer said security will be massive for the game — including in the air.

“They take that pretty seriously,” he added.

But as Aimer noted, the immense air and ground security will blend with a massive economic infusion brought by the giant game.

Ultimately, the air traffic will be part of a huge economic payday from the Super Bowl, according to a report by Micronomics Economic Research and Consulting.

After two years of pandemic, and decades since the last Super Bowl in the area, any kind of a bump is a good bump.

Inglewood alone could see gains of about $52 million, with tax revenues staying in the City of Inglewood reaching $1.8 million. Total room nights at local hotels will exceed 10,000; and jobs added could approach 800, according to the report.

Back at the Hawthorne, Cristian Lopez, operations manager for Advance Air and Jet Center Los Angeles, was already seeing the booking tick up rapidly by Friday. Staffers have been busy setting up a tented lounge at the site. The on-site restaurant, Eureka! is also expected to be quite busy.

“I think this will be our coming-out party as a destination,” Lopez said, echoing Stockton that it will be the businesses’ busiest week ever for the airport operator.

From left, Cristian Lopez, FBO Operations Manager at Jet Center Los Angeles, and Levi Stockton is the President and Founder of Advanced Air, LLC and Jet Center Los Angeles in Hawthorne on Friday, February 4, 2022. The airport is 2.3 miles from Sofi Stadium and stands to see increased business on Super Bowl Sunday. (Photo by Brittany Murray, Press-Telegram/SCNG)

Indeed. With the arrival of the lavish $5.5 billion SoFi Stadium, and numerous big events coming, air operators see a bright future, foreshadowed by this Super Bowl. Also on the horizon are major concerts, Wrestlemania 2023 and next year’s College Football National Championship.

Lambert, in Ontario, pointed to a potentially even bigger impact as the Olympic Games return to Los Angeles in 2028.

“This whole region is making plans, and the impact is going to be huge on airports, hotels, restaurants and mass transit,” he noted.

The Super Bowl, in a way, is a sign of things to come, many said.

“It will be the first of many significant events … we’re going to be learning as we go,” said Barbara Hunt, vice president of business operations at Advance Air and Jet Center Los Angeles.