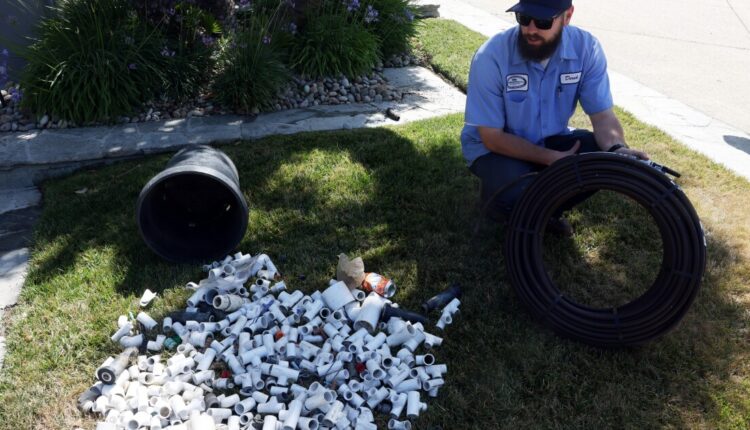 This time of year, the calls and emails pour in daily: “I just built a pool — can you come fill it?”

“I had at least seven just over the weekend,” said Amy Underwood, manager at Mel Underwood Water Trucks in Sylmar, which supplies water for special effects and fire safety to movie sets — not to thirsty homeowners. “We get calls from Inglewood, Crenshaw, El Monte, San Diego, Vernon, Bakersfield.”

‘ ‘Hey, we’re in a drought and I can’t water my lawn — can you come water it? My neighbors will turn me in if I turn on my sprinklers,’ ” Underwood said, rattling off example after example. “ ‘We’re replastering our pool — can you come drain it and store the water, and come back and refill it?’ ‘We haven’t paid our water bill and we don’t have water, can you come park your truck here so we can shower?’ ”

Obtaining water, conserving water and, in some cases, stealing water have become pillars of the drought microeconomy. It is a vast and quickly expanding marketplace that includes products — artificial turf, rainwater storage tanks and low-flow household fixtures among them — and services such as security firms hired to patrol neighborhoods looking for signs of water waste; recycled-water car wash facilities; and companies that will paint your brown grass green or remove your lawn and replace it with native landscaping.

For more than two decades, laying sod and fixing sprinklers were big parts of the job for landscaper Daniel Gonzalez, whose wealthy Calabasas clients insisted on immaculate, lush lawns watered evenly and regularly.

But now “they don’t care about sprinklers — they want them out,” Gonzalez said on a recent Tuesday from the driveway of a house in guard-gated Mountain View Estates, its yellowing front lawn covered with dirt-smudged and dismantled plastic tubes valves.

Landscaper Daniel Gonzalez, left, and Derek Krauss, a field customer service rep with the Las Virgenes Municipal Water District, at a Calabasas home where Gonzalez had spent the morning installing a drip-irrigation system. He installed six in June at $4,500 each.

The homeowners had paid Gonzalez $4,500 to install drip irrigation, a low-pressure watering system that delivers moisture directly to the roots of plants. Since the Las Virgenes Municipal Water District implemented a one-day-a-week outdoor watering restriction on June 1, he has done the same for half a dozen other homes in the exclusive community and has a seventh scheduled in Thousand Oaks; drip-irrigation systems are exempt from the new rule.

“People want them right away,” said Gonzalez, 44, who lives in Reseda. With a crew of three workers, he can get the job done in one day, but finding all the materials has been a challenge due to high demand, ongoing supply chain problems and inflation.

“They say they don’t have it,” he said of the local hardware stores where he shops for parts, many of which are on back-order. Then “the next time I come in, they’ve raised the price.”

At Smith Pipe & Supply in Westlake Village, customers have been bypassing the 5-foot-high rack of synthetic grass options — too expensive, not realistic-looking — prominently displayed by the front door in favor of drip-irrigation systems, salesman Armando Luna said.

“Everyone is freaked out about one-day-a-week,” he said. 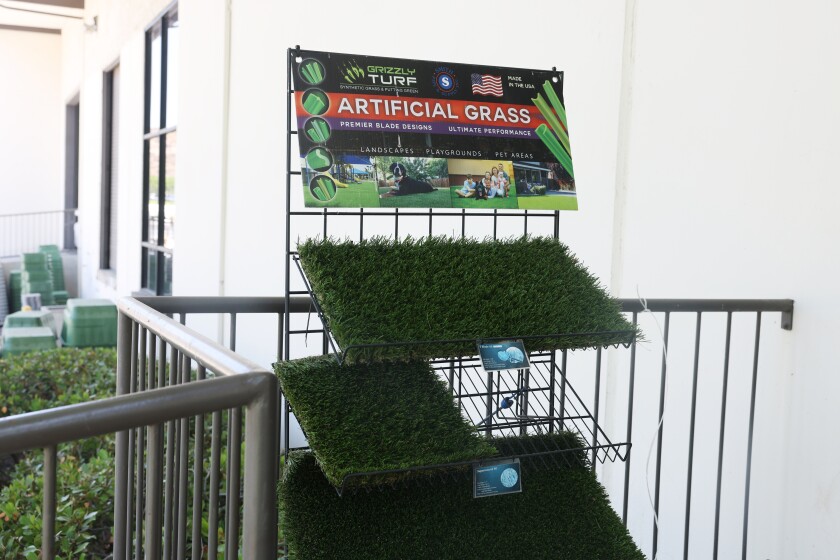 A display of artificial grass outside Smith Pipe & Supply in Westlake Village.

They’re selling so fast that the store is having trouble keeping them in stock and recently added more models to its merchandise selection.

“My supervisor ordered 300 rolls of plain tubing, but only 75 arrived,” Luna said. “Then in two days, it was gone.”

To catch a thief

Since the new restrictions went into effect, officials have already seen a noticeable drop in water consumption in Southern California. But while many homeowners have cut their usage, others are spending money to keep things flowing.

“People with means have opportunities they can create for themselves: hiring someone to hand-water their lawn; ‘I’m going to drill my own well’; hiring someone to truck water in,” said Mike McNutt, a spokesman with the Las Virgenes Municipal Water District. “I don’t know if there’s anything we can do to prohibit that, but it highlights the difference between the haves and have-nots.”

Field reps for the district routinely drive through the coverage area — which includes the ultra-wealthy enclaves of Agoura Hills, Calabasas and Hidden Hills — looking for telltale signs of water waste, typically in the form of runoff trickling down the side of the street. It has also hired Dial Security, a Camarillo firm, to run patrols.

More than ever, we’ve been catching more water trucks stealing…. They’re getting smarter — they know at 2 in the morning, we’re not working.

Of growing concern is water theft: thieves who illegally hook up to fire hydrants and filling stations without a permit, siphon off water and then sell it to consumers. Sometimes the companies behind such operations are legitimate water suppliers by day, authorized to tap into the hydrants for water to bring to construction sites, for dust control or to refill handwashing stations.

“More than ever, we’ve been catching more water trucks stealing,” said Derek Krauss, a field customer service representative with the district. “It’s not a super-common thing, but it happens.”

Krauss said residents have called in when they’ve noticed trucks opening up hydrants but can rarely offer identifying details because the vehicles are usually unmarked. The district suspects most of the activity is occurring in the middle of the night.

“If they disconnect and take off, there’s nothing we can do,” Krauss said. “They’re getting smarter — they know at 2 in the morning, we’re not working.”

But by and large, businesses have been operating above board, many taking it upon themselves to reduce their water consumption, Las Virgenes general manager David Pedersen said. Some businesses have voluntarily reduced their water consumption. The Cheesecake Factory, based in Calabasas, uses large quantities of water due to the washing equipment required during the cheesecake-making process; it installed water-efficient sprayers and nozzles.

One of the largest commercial users of water in the Las Virgenes Municipal Water District is the Cheesecake Factory, he said, because of the amount of washing equipment required during the mass production of cheesecakes at its bakery there. To cut back, the Calabasas restaurant chain voluntarily installed water-efficient sprayers and nozzles, Pedersen said, noting that the district had been hesitant to implement restrictions on local companies for fear it would affect productivity and hurt the economy.

Despite efforts to mitigate the effects of the drought, businesses behind the scenes are also preparing for inevitable wildfires — and more of them. 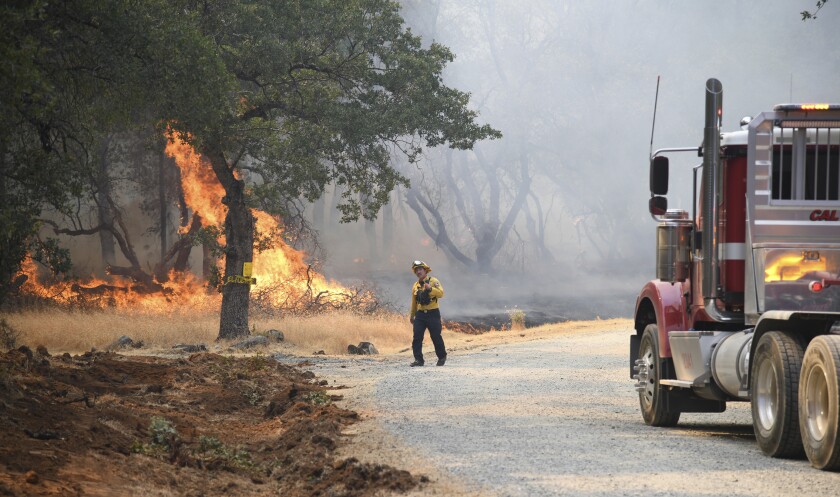 A firefighter assesses the approaching flames in California’s rural Nevada County as the Rices fire burned in late June.

“The scale has jumped up,” he said. Already, “we’re at least 30 days ahead of where we were this time last year. If you go back to 2017, the scale, intensity, frequency, amount of properties being threatened is just climbing rapidly.”

Large national firms like Wildfire Defense Systems are busy throughout the year. But Gonzalez, the Reseda landscaper, said despite the boom in business recently, he’s worried about the one-off nature of selling drought-related products: Once the drip-irrigation systems are installed in homes, there will be little need for his services going forward.