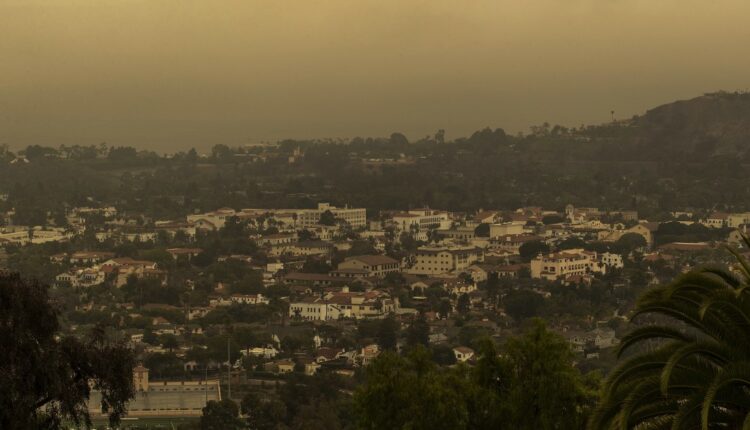 Heavy smoke from forest fires raging in central California has pushed south, causing an air quality alert for some southern California mountain areas, and conditions are ripe for more toxic clouds later in the week.

The South Coast Air Quality Management District issued the special notice on Monday in anticipation of increased Air Quality Index readings – a measurement of air pollution – in parts of the San Bernardino and San Gabriel Mountains.

Smoke from the fires of the Windy and KNP complexes – two explosive flames in the southern Sierra Nevada – have turned the Los Angeles sky to eerie gray and orange tones in recent days and continues to pollute atmospheric conditions more than 160 kilometers away.

“It’s not necessarily blown up in the areas where we breathe – it’s still high in the atmosphere – but … regions,” said Sarah Rees, assistant director of planning and regulations at South Coast AQMD.

Air quality on Monday morning was good to moderate across the region, but at high altitudes it could deteriorate later in the day.

As of early Monday afternoon, the San Gabriel Mountains near Wrightwood had an AQI of 76, which IQAir says is moderate. However, the air quality in areas closer to the fires was much worse. Kernville, southeast of the Windy Fire, had the worst air quality in the US with an AQI of 437. Threatened by the KNP complex, Three Rivers was second worst with a rating of 350.

The AQI scores range from 0 to 500, with higher numbers indicating higher levels of air pollution and health concerns. An AQI over 300 stands for dangerous air quality.

North and northeast winds that drove the smoke to southern California are expected to return along with high temperatures and low humidity on Wednesday and Thursday – conditions that increase the risk of fire, weather officials said.

“That would certainly be a cheap route to import smoke from the Windy Fire,” burning north in the Tule River Indian Reservation and Sequoia National Forest, said David Sweet, a meteorologist with the National Weather Service’s Oxnard Station.

Since igniting during a thunderstorm on September 9, the Windy Fire has risen to 85,383 acres, burning in the Giant Sequoia National Monument, and only 2% contained. While the fire continues unabated, the flames threaten around 2,000 homes. On Monday morning, the authorities issued a new evacuation warning for the M99 corridor along the Kern River.

Not far away, the fire of the KNP complex in Sequoia National Park tore apart the famous Giant Forest grove with towering sequoia trees on its march through impassable terrain. The KNP consists of two lightning fires that began on September 9 during the same storms that triggered the Windy Fire.

Forest fire smoke isn’t the only thing darkening the skies over Southern California.

A depression moved into the Southern California region, lowering temperatures and creating a thick layer of ocean in some regions.

Oxnard saw a trail of rainfall and other coastal areas saw a drizzle.

The cooler, wetter atmosphere provides “a bit of relief for our fire situation,” said Sweet, who added that it will likely only be a brief respite until warm Santa Ana winds arrive mid-week. Inland areas such as Antelope Valley “are not taking advantage of the ocean layer,” he said.

While the moisture is welcome, it won’t dent the state’s drought conditions. “The fact is, we still have very, very dry slopes,” said Sweet.