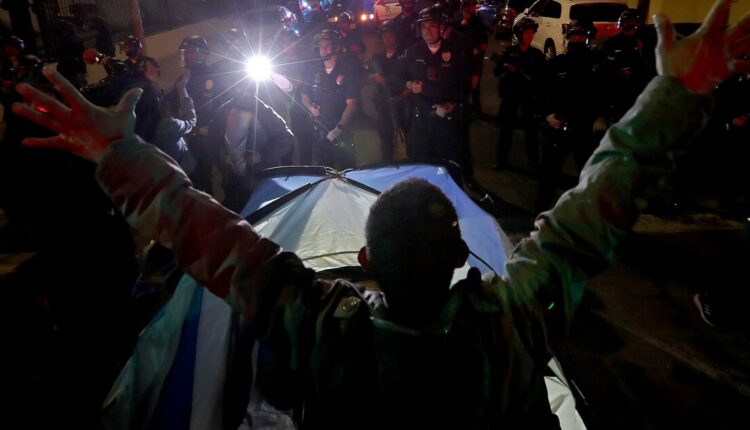 A year after authorities removed a homeless encampment at Echo Park Lake, resulting in 179 arrests, few residents from the encampment have received long-term housing, and many others remain on a waiting list, according to a study published Wednesday by the UCLA Luskin Institute on Inequality and Democracy.

Researchers analyzed data from the Los Angeles Homeless Services Authority and found that of the 183 people who were on the “Echo Park Lake placements list,” only 17 received long-term housing, while 48 remain on a waiting list. At least 15 went back to living on the streets, and six had died. Researchers found that LAHSA had lost communication with 82 people. At least 15 were unsuccessfully housed.

Heidi Marston, executive director of LAHSA, did not respond to the report’s findings but said lessons were learned from the Echo Park Lake encampment that include issuing new guidelines on how to address street encampments.

“These best practices include providing plentiful housing resources and client-centered care.” she said. “We are committed to implementing and improving on these best practices as we continue to partner with service providers and community partners on the most effective ways to conduct location-specific outreach to help bring our unhoused neighbors inside.”

The report, authored by the After Echo Park Lake Research Collective and the data team at the Luskin Institute, furthers the cause of homeless advocates who have criticized city and county officials for clearing encampments even when there is insufficient long-term housing for those displaced. It also comes a day after the candidates in a mayoral debate said they would expand temporary housing programs while enforcing the city’s anti-camping laws.

The clearing of the Echo Park encampment became a flashpoint for LA’s homelessness crisis. At the time, about 193 people were believed to be living at the encampment, where they had created a communal atmosphere and received help from several homeless advocacy groups.

But a group of nearby residents in the area complained of drug use, crime and trash. They eventually received more than 4,000 signatures in an online petition asking the city to remove the camp.

The clearing of the encampment was done quietly at first, as city and county officials attempted to get many people in the encampment into short-term housing, primarily through Project Roomkey, a state program backed by federal dollars that allowed homeless people to ride out the pandemic in hotels. The plan was to eventually place them in permanent housing.

In March 2021, homeless advocates faced off with police who were tasked with removing the 15 to 20 people who had not left the park while city workers fenced off the area.

The clash led to 179 arrests, including several members of the press. In the aftermath, the mayor and several elected officials, including Councilman Mitch O’Farrell, said at the time that the clearing of the encampment had led to more than 120 people being placed in temporary housing that would eventually lead to permanent housing.

The UCLA researchers said the removal of the Echo Park Lake encampment created a blueprint for the city to handle other encampments. They referred to it as a “housing ruse” because public agencies and elected officials told homeless people there was a path to stable and permanent housing even though it was short-lived.

“We note that the term ‘housing’ itself deserves scrutiny since Los Angeles politicians conveniently use it to refer to various forms of temporary and emergency shelter, including those with exclusionary eligibility criteria and rules,” the report read. “In the two months while [Echo Park Lake] was fully shut down, Councilmember O’Farrell and others doubled down on the line that the operation was a ‘housing’ success, describing it as ‘the single largest housing event in the history of the city.’”

O’Farrell disputed most of the report’s findings, calling the situation in the Echo Park Lake encampment unsafe for both the housed and unhoused.

“What actually happened was a three-month outreach process that led to a warm handoff to LAHSA and transitional housing placements for nearly 200 people who had been living in a dangerous, deadly environment,” O’Farrell said in a statement. “Since last spring, we have continued to stand up hundreds more safe, secure spaces for unhoused residents in the area, with more on the way.”

Since the Echo Park action, the city and outreach workers have removed several other encampments, most noticeably in Venice Beach and Little Tokyo. Each time, elected officials have praised city and county efforts to move homeless people into short-term housing.