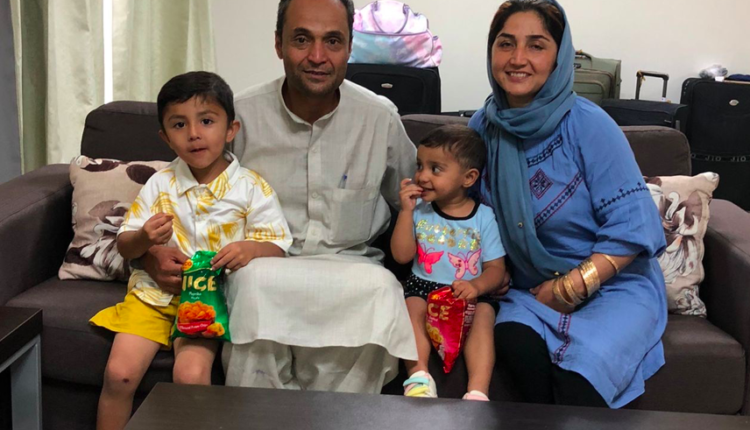 When the Kashefi family first arrived in Southern California in March 2017, it was because Bashir Kashefi had finally secured a safe exit after working for the US government for more than a decade.

But a summer trip to visit families went very badly for the Kaschefis, who arrived in Afghanistan in June and were planning a return trip just a few days before the country fell into the hands of the Taliban.

In a video broadcast on NBC4, Bashir Kashefi said he was afraid for his family’s lives.

“We tried to leave Afghanistan more than nine times,” he said. “We went to the airport to get a plane, but unfortunately it was difficult to get in because it was so full.”

Repeated attempts by members of the US government have also been in vain.

And when the US troops withdrew, he almost lost all hope.

“Just coping with life in Kabul, Afghanistan … it is harder and harder than ever at the moment,” said Kashef.

Kashefi was the basis for an NBC4 story back in April 2017 about a local nonprofit called Miry’s List. Miry Whitehill started the charity to help refugee families relocate to the United States. The Kashefi family were one of the first families to help Miry’s List find a place to live, furnish it, and set her on her path to prosper in the United States

Bashir Kashef became an ambassador for Myry’s List – a success story – of what the nonprofit can do, and even appeared on a special Belmont Shores TedX talk telling his story of starting over.

In August 2021, after the Taliban takeover in Afghanistan, Miry’s List announced its Emergency Action Fund, which leads to donations from Lady Gaga for the resettlement of refugee families.

No wonder then that Miry’s List stepped in again to help the Kashefi family find their way home.

A group of volunteers – they call themselves Hive – ensured that the Kashefi family did not experience the trauma of returning to the US as they did when they first arrived.

“You are in a life or death situation one way or another,” says Laurel Felt, Hive volunteer. “World events have conspired against them. You didn’t do anything wrong. You haven’t taken anything on yourself. “

The Hive has raised funds to cover the family’s living expenses abroad and to settle the bills at home to keep them informed when they return.

“We really wanted to make sure the rent was paid, the utility bills paid, certainly the cell phone, because that was our lifeline for him,” said Hive volunteer Shareef Mustafa. “We wanted to make sure that her repatriation to the US is not filled with the same fear as when she arrived in 2017.”

And good news came on Monday morning – the Kashefi family shared photos from Doha, Qatar. You were out of Afghanistan and safe.

“Bashir confirmed that they all slept well last night for the first time in a long time,” said Felt.

However, the family’s return to Southern California and their Anaheim home is still unclear. It will likely cost extra money and effort from volunteers hoping to see the kashefi states soon.

Casual break-ins at SMC – The