Essential Arts: The new Facebook logo? This is so meta 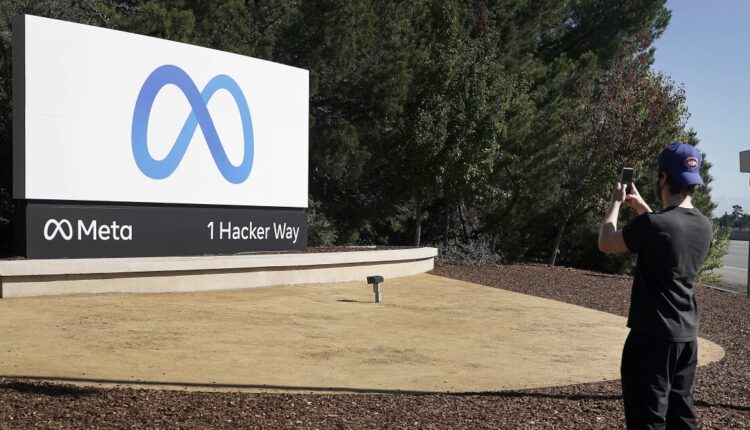 It is time to honor the ancestors and, as part of them, ingest all the food essentials for the day of the dead. I’m Carolina A. Miranda, art and urban design columnist for the Los Angeles Times, alive and here with the top art news of the week:

The new logo has already been compared to testicles and Spiderman’s mask on social media. Bill Gardner, who publishes a logo trending report through his LogoLounge website, tells QZ’s Anne Quito that Meta’s Mobius strip-style shape was trending … in 2008. (Here’s Gardner’s 2008 logo report.)

Far more interesting than lingering on the company’s extremely uninteresting logo is reading its questionable governance – which was made public in recent weeks through leaked internal documents and the congress testimony of former Facebook employee and whistleblower Frances Haugen. The Washington Post published a large number of reports based on these findings.

Conclusion: “The social media giant has privately and meticulously followed the damage exacerbated by its platforms in the real world, ignoring warnings from its employees about the risks of their design decisions and exposing vulnerable communities around the world to a cocktail of dangerous content.”

Now for other bad ideas:

The LA Zoo is looking to expand its facilities (many of which date from the 1960s) in a plan that would take up 23 acres of native forest, reports Louis Sahagún of The Times. A few local organizations – Friends of Griffith Park and the California Native Plant Society – are opposed to the $ 650 million plan, which includes the development of rock-climbing walls and vineyards.

Times readers don’t get any of this.

The Times classical music critic Mark Swed sat down for an open conversation with LA Music Director Phil Gustavo Dudamel about the impact the pandemic has had on his work and personal life. Among other things, he lost the grandmother who raised him. And the closings forced him into unexpected roles: from soliciting funders to hosting a radio program. “Everything can be the last time,” he says. “How you do it, how you are, how you create music, how you interpret music, all of this goes deep into your being.” 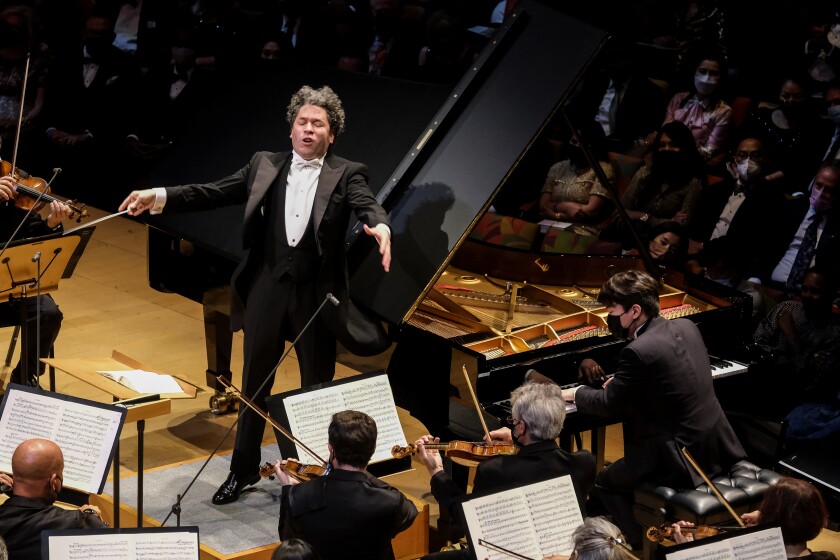 (Ringo Chiu / For the times)

Swed also writes about Phil’s recent Disney Hall appearance that included Steven Mackey’s Shivaree: Fantasy for Trumpet and Orchestra. His review begins with a rather spectacular play on words: “Shivaree, chthonian, erumpent, tintinnabulation, exonumia, requiescat, deipnosophist, omphaloskepsis, horripilation, deliquesce, apopemptic. How many of these fabulous words do you know? ”It turns out that these were the words that flashed over the orchestra during the 12 short movements of Mackey’s composition. “The word came first,” he writes, “followed by Mackey’s short, fantastic musical answer.”

Your must-have guide to the LA arts

Get Carolina A. Miranda’s weekly newsletter for breaking news, openings, reviews, and more.

The Los Angeles Opera’s new production of “Tannhäuser” has landed in the Dorothy Chandler Pavilion. The sets don’t look so hot in this version of the opera directed by Louise Muller, but James Conlon’s conducting, writes Swed, “is better than ever”. And Sara Jakubiak, a young soprano from Michigan, provides a jolt in the second act.

ICYMI, Swede, also reviewed Jonas Kaufmann’s recital on the Broad Stage in Santa Monica last week. “Kaufmann,” he writes, “revealed an impressively robust, focused, heroic voice that is especially effective when reduced to a whisper that seems to say, ‘Yes, I really care.'”

With the vast emptiness of space the only place that can still be filled with art, artist and engineer Xin Liu sent her wisdom tooth into the sky in 2019 on board an early iteration of a Blue Origin rocket. Now the tooth can be seen in a sculptural installation at Honor Fraser Gallery – part of a group exhibition that also features work by Nancy Baker Cahill and LaJuné McMillian. “The act of sending a tooth into space,” she tells Deborah Vankin of The Times, “is very much a ceremony and a performance for me.”

An exhibition of Renaissance portraits by Hans Holbein the Younger has landed at the Getty Museum, and the exhibition with 33 paintings and drawings by the artist “opens with a bang,” reports art critic Christopher Knight. “Holbein’s seamless combination of materiality and symbolism was more than just conspicuous,” he writes. “Instead, it’s what makes the authenticity of his flesh and blood portraits so fascinating.” 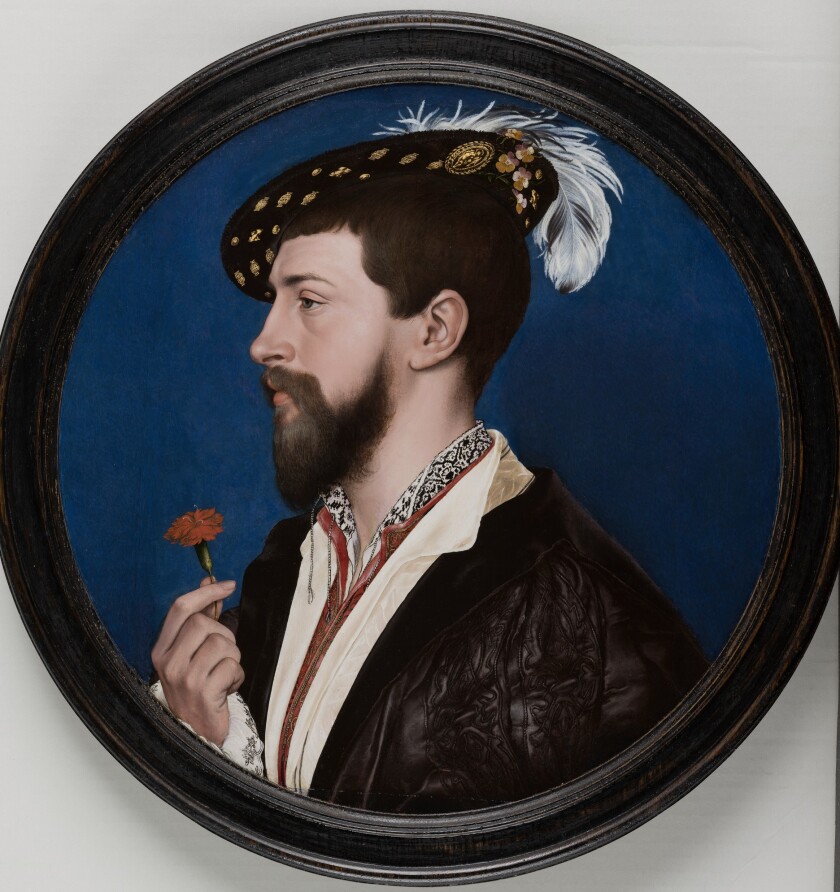 A production of Jean-Claude van Itallie’s groundbreaking play “The Serpent” was interrupted by the pandemic, but is now back in a production at the Odyssey Theater. It is a presentation, writes theater critic Charles McNulty, that has additional resonance given Van Itallie’s death in September. The new production eludes a bit of the collective spirit of the original staging, he writes. But “it is encouraging to witness this sample of a theater tradition that is so at odds with today’s commercial zeitgeist.”

Matt Cooper has the best events for the weekend, including a dance performance by Micaela Taylor and her dance company in Valais and Rachmaninov’s “Vesper (All-Night Vigil)” sung by the Pacific Chorale in Segerstrom in Costa Mesa.

Cooper also has a guide to 10 free, family-friendly Día de los Muertos events, including performances, food, and an exhibition by Self Help Graphics & Art – its 48th celebration. 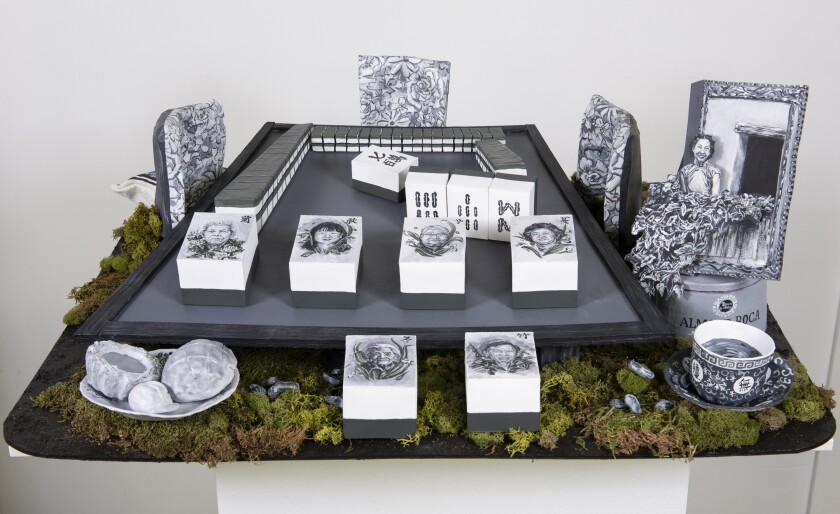 “Flower, Season, Fortune”, an altar by artist Sandra Low, will be on view as part of the exhibition Día de los Muertos at Self Help Graphics in Boyle Heights.

Kenneth Baker, a longtime art critic for the San Francisco Chronicle, has died at the age of 75. “Although it was sometimes a challenge for the average reader to unpack the book,” writes Steven Winn of the Chronicle, “Baker’s prose was often lyrical and evocative.”

– It appears that UC Santa Barbara and a very wealthy patron are trying to create a Kowloon Walled City inspired dormitory on the UCSB campus.
– Oliver Wainwright from the Guardian examines the new Munch Museum in Oslo by the Spanish architect Juan Herreros, who speaks out against horizontal museums. (Cough, cough, LACMA.)
– “Pixar is concerned with the urban condition, and we are poisoning and consuming ourselves all to the point of extinction.” Justin R. Wolf writes for Common / Edge about the subversive urbanism of the Pixar films.
– A 1952 Los Angeles home designed by Gregory Ain is being restored after a fire courtesy of Escher GuneWardena.
– Important update of the programmatic architecture: Tail o ‘the Pup is celebrating a comeback.
– The musical “Diana”? Lily Janiak of the San Francisco Chronicle says it’s not as bad as everyone says it is.
– “It’s a tough job, it’s a great job, whether you’re a woman or a man.” The New York Times portrays Eun Sun Kim, the first woman to serve as music director for the San Francisco Opera.
– Joy Horowitz from Angel City Chorale writes about what it means for a woman to sing tenor.
– A private collector has returned an important Mayan artifact to Guatemala after it was put up for auction. Here is Christopher Knight’s 2019 report on the history of the artifact.
– An initiative led by the Equal Justice Initiative in Alabama is placing plaques to commemorate the location of the lynchings in the United States

Last but not least …