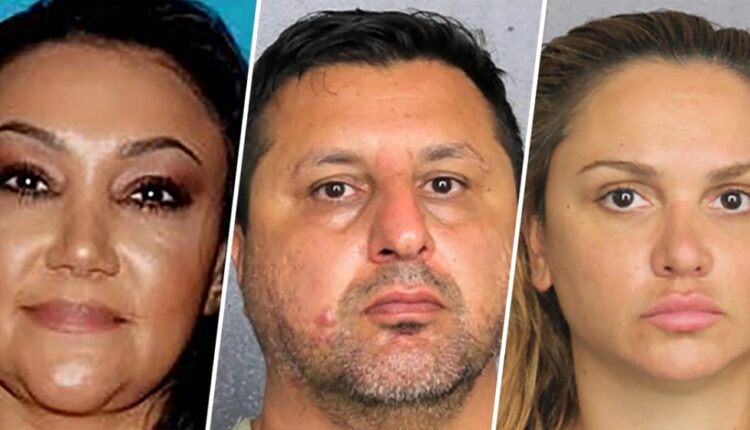 Three members of the San Fernando Valley family accused of removing their tracking bracelets and going on the lam after they were convicted in an $18 million COVID-19 relief fraud case were captured in Montenegro, federal authorities said Wednesday.

Richard Ayvazyan, 43; his wife, Marietta Terabelian, 37; and his sister-in-law Tamara Dadyan, 42, were arrested Tuesday in the small mountainous country in southeastern Europe, the sources said.

They have been missing since Aug. 29.

The three were among eight family members convicted of stealing more than $18 million in COVID relief loans and using the money on extravagant expenditures, like down payments on luxury homes, designer handbags, clothing and a Harley-Davidson motorcycle.

It was not immediately clear how their extradition to the US might play out.

The bizarre story has been so since the beginning.

In November 2021, the couple Ayvazyan and Terabelian were sentenced in court despite a no-show, which their family said was because they were kidnapped — apparently to prevent them from disclosing the identities accomplices who are not indicted, according to court papers.

The FBI however said the married couple, facing the possibility of years behind bars, removed their location monitoring devices, left a note for their children, and absconded together from their Encino home. The following day, a Los Angeles judge signed bench warrants for their arrest.

In November, Ayvazyan was sentenced to 17 years in federal prison and his wife was handed a six-year term, according to the US Attorney’s Office. Ayvazyan was the alleged mastermind behind the crime ring.

Encino brothers and their wives were accused of getting fraudulent loans to buy luxury homes. Angie Crouch reports Nov. 18, 2020.

The couple and two relatives were found guilty in June of 2021 of scheming to submit fraudulent loan applications under which they and others obtained more than $18 million in Paycheck Protection and Economic Injury Disaster Loan program funds, which they used to make down payments on luxury homes in Tarzana, Glendale and Palm Desert, and to buy other high-end items such as gold coins, diamonds, jewelry, luxury watches, imported furnishings, designer handbags, clothing and a Harley-Davidson motorcycle.

Ayvazyan “victimized elderly persons (including those with disabilities), deceased persons and foreign exchange students who had spent only a few months in the United States years ago and now lived thousands of miles away in a foreign country,” prosecutors wrote.

The Los Angeles federal jury determined the defendants must forfeit bank accounts, jewelry, watches, gold coins, three homes and about $450,000 in cash, according to the US Attorney’s Office.

Prior to the verdict, four accomplices pleaded guilty to criminal charges in the case.

(Corrected) Richard Ayvazyan, 43, & Marietta Terabelian, 37, were found guilty in $21 million bank/SBA fraud & are set to be sentenced. The pair of allegedly cut monitoring bracelets & are considered fugitives. Please call 3104776565 if you have info as to their location #TipTuesday pic.twitter.com/pyyGOMiVF4