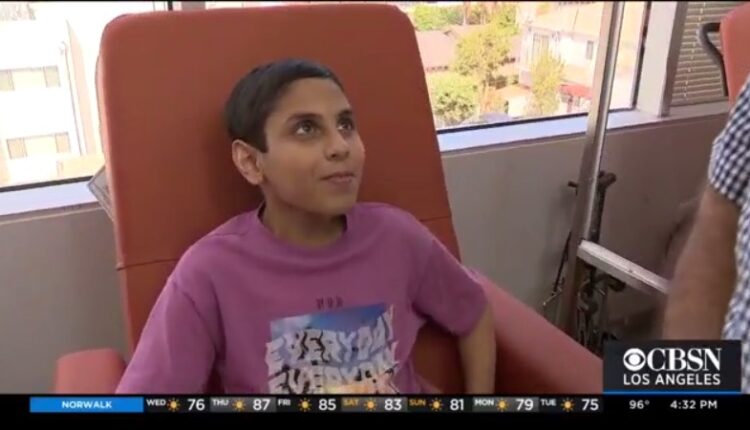 SANTA MONICA (CBSLA) – A Seattle father brought his son to Santa Monica in hopes of one thing: finding a cure for his 11-year-old son who has a rare form of cancer.

Kian Faghih was diagnosed with rhabdomyosarcoma (RMS), a cancer of the heart and skeletal muscles that originated in another part of his body and has now spread to his lungs.

“In the end they said that there is no cure for him and there is nothing we can do for him. That’s why we started looking, ”said Jamshid Faghih, Kian’s father.

Kian has been battling cancer for two and a half years. After being told that there were no other options, his father found Dr. Erlinda Gordon of the Sarcoma Oncology Center in Santa Monica. The Faghihs turned to Dr. Gordon to see if Kian could receive an experimental treatment she developed called DeltaRex-G, an innovative gene-directed cancer therapy.

Gordon said yes, which made Kian the youngest patient to receive DeltaRex-G.

“His prognosis is really his last hope. He tried everything … when he got here we were able to give it to him the same day he got there, ”said Gordon.

Kian has been receiving infusions from DeltaRex-G for almost three weeks. Unlike chemotherapy, there are no harsh side effects with this treatment because it is genetic medicine that targets the tumor directly.

“It’s going to go there and nowhere else so it doesn’t cause collateral damage,” Gordon said. “What it does is send the message to the cancer cell to stop dividing. Delta Rex not only kills the cancer cells themselves. It also kills the blood supply to the tumor. “

Jamshid has already seen improvements in Kian, who received his final treatment with DeltaRex-G on Friday.

“The medication he is being given here (Kian) started to breathe better and he was feeling better,” said Jamshid. “It feels great, it’s like a miracle to us.”

However, this treatment is not available through drug or insurance companies, but rather through a nonprofit public charity run by Dr. Gordon was founded. The Fanghihs have launched a GoFundMe campaign to raise funds to get more medication for Kian and other cancer patients treated through the AVENI Foundation.

Further information on the AVENI Foundation can be found here.