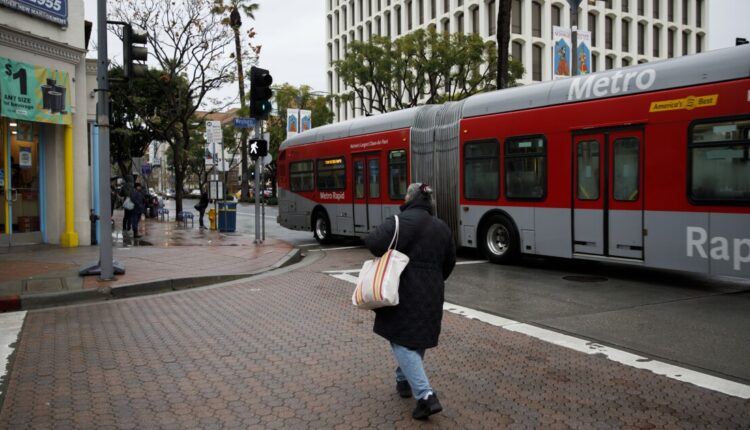 With a great roar this week, President Biden signed the $ 1.2 trillion infrastructure bill, which he said includes an “unprecedented” and “historic” investment in public transport.

But apparently not for California. As the president turned a winning streak to pass the infrastructure spending package, his administration prepared to freeze $ 12 billion in public transportation for California. Why? The Department of Labor decided to withhold federal grant funds on the false assumption that the 2013 state Pension Reform Act undermines workers’ collective bargaining rights.

The decision would freeze emergency aid that Congress approved earlier this year to help transport companies stay afloat after losing passenger numbers and revenue during the COVID-19 pandemic. Transport companies have relied on this money to keep buses and trains running and may have to cut service if this funding stops. The $ 9.5 billion that California is to get from the new infrastructure law for transit projects is also in question.

Depending on how long the stalemate between the federal government and California lasts, transportation companies may need to delay development or borrow money to keep large projects like the BART expansion in the Bay Area on track. In Los Angeles County, the Metropolitan Transportation Authority has relied on federal grants to restore bus traffic after the pandemic slowed. The agency has also planned to use federal funds to buy zero-emission buses and develop light rail lines in the East San Fernando Valley and southeast LA

The Biden government’s actions are particularly disappointing because they run counter to many of the president’s climate priorities. Eliminating these funds would harm road users, who have disproportionately lower incomes and rely on bus and train connections to get to work and school, and potentially slow down public transport expansion projects that help communities reduce their dependency of polluting cars to decrease.

It is also amazing that the Biden administration would cut California off now; The law at issue is nearly a decade old and upheld by previous court decisions.

This struggle stems from a pension reform effort spearheaded by Governor Jerry Brown to slash the skyrocketing bills for public employees’ retirement benefits, which were expected to cost billions of dollars more than state and local governments earmarked for them had. Legislators agreed to a modest revision that went into effect in 2013. Changes included raising the retirement age for new hires and requiring more contributions to their benefits, as well as restricting some rules that allowed employees to inflate their retirement benefits.

Public sector unions have filed numerous lawsuits to block the law, many of which have been rejected. The Obama administration also interfered and threatened to withhold federal funds for local public transport on the grounds that the amendment violated a federal law of 1964 intended to protect the collective bargaining rights of local transport workers. Brown fought against the Labor Department’s decision and won in federal court.

In an angry letter to Secretary of Labor Marty Walsh, Governor Gavin Newsom pointed out that federal and state courts have repeatedly rejected the idea that the pension reform law affects collective agreements. This should now be regulated by law. Instead, the Biden government is taking up old arguments at the expense of California transit drivers. Newsom has asked a federal court to force the Department of Labor to release the funds while the matter continues to be heard in court.

What is the endgame? Public employees unions are a huge influence in California. Still, lawmakers agreed to cut pensions, realizing that the rising cost of pension benefits could bankrupt some cities and ultimately lead to fewer services and jobs. If Biden wants California to roll back pension reforms, is the federal government ready to bail out transportation companies that have to bear higher pension costs? And what if other public service unions ask for the same treatment?

Biden should stop fighting over the past. This should be a moment when California and the federal government work together to expand public transit for the good of drivers and the environment.

Podcast: The story of the glittering LA gambling boat king