Edgeway Much the Best in Las Flores 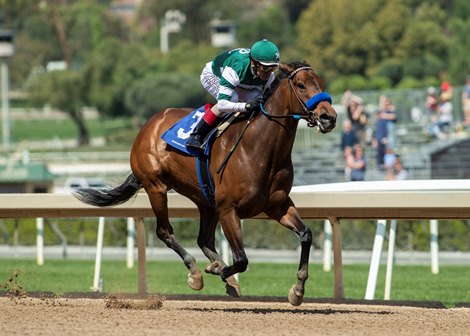 Hronis Racing’s Edgeway added the $100,000 Las Flores Stakes (G3) as easily as one would expect from a 2-5 favorite at Santa Anita Park. The graded stakes-winning daughter of Competitive edge is now 2-for-2 for the year after taking the Jan. 2 Kalookan Queen Stakes and defeating two-time Santa Monica Stakes (G2) winner Mernith over the same track in her season debut.

“The focus with her is the fall, we want to get her back to the Breeders’ Cup,” said Kosta Hronis. “So staying home, not doing a lot of traveling with her until we have to is how we’ll approach it. We’ll keep our options open and see how she comes out of the race and then make a plan for the next race .

“This early in the year, we’re better off playing it this way. It’s a long season and she’s five and has been fresh all along, so we’ll just keep her that way and just kind of let her make her own schedule .”

Edgeway came into the six-furlong race for older fillies and mares off a bullet work March 6 when she completed five furlongs in :59 1/5 to be the fastest of 57 at the distance that day.

In Sunday’s test, jockey John Velazquez sat patiently aboard Edgeway as she loomed outside private mission , who held a short lead and posted a quarter-mile time of :21.77. Edgeway passed the leader with minimal effort and posted a half-mile time of :44.47. By the time she reached the stretch, Edgeway had open lengths between herself and the runner up, finishing seven lengths ahead in a final time of 1:10.22 on a fast track.

“She was more handy, I mean whatever I wanted to do, she was there when I asked her to do something,” said Velazquez, comparing Edgeway’s win to her effort in the Kalookan Queen. “When I called on her a little bit she was there instantly and in the stretch, I just kept her happy, not much effort though.”

Private Mission held for second while Dynasty of Her Own other Hello kittens rounded out the field.

Bred by Pope McLean, Valerie Blethen & David Blethen in Kentucky, Edgeway is the fourth foal to race and only graded stakes winner to date out of the stakes winning Stormin Fever mare Magical Solution, a half sister to grade 1 winner The Lumber Guy.