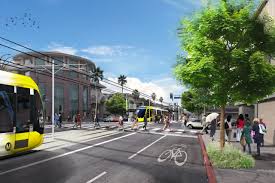 The Federal Transit Administration said this week that it will contribute $908.7 million to the East San Fernando Valley Transit Corridor light rail route, which will connect Pacoima and Van Nuys. The 6.7-mile route will travel north-south in the Van Nuys Boulevard median, having 11 stations and connecting to Metro’s G (Orange) Line busway and the Metrolink Ventura County line.

“The eastern San Fernando Valley Corridor is one of the busiest transit routes in the country,” stated Deputy Secretary of Transportation Polly Trottenberg in a news release. “This news represents a significant step toward providing additional transportation alternatives, a better commute, and cleaner air for people in the San Fernando Valley and Los Angeles.”

The FTA finance deal will cover 25% of the project’s overall costs, which are projected to be $3.6 billion. According to a project page on the Metro website, the East San Fernando Valley Line is slated to begin construction in 2022 and open in 2028. When completed, the transit route will provide a 30-minute end-to-end ride between Pacoima and the Van Nuys Station on the G Line busway, which is also slated to be grade-separated and converted to light rail in the future.

The northern 2.5 mile stretch of the East San Fernando Valley Line, which would run between Pacoima and the Sylmar/San Fernando Metrolink station, is not covered by the FTA. The northern segment of the light rail line was cut from the project’s intended scope in 2020 due to rising construction costs. In place of installing 2.5 miles of extra track, Metro has subsequently considered expanding Metrolink service with a new station at Van Nuys Boulevard.

The clearance from the FTA allows LA Metro to potentially seek some type of funding in the federal pipeline for the final design and construction of the 15-kilometer project, which is planned to connect the Van Nuys Metro “G” (Orange) Line Station with the San Fernando Metrolink Station. The light-rail line will travel primarily along Van Nuys Boulevard, one of the Valley’s most heavily traveled corridors.

Approximately US $1.3bn has been estimated for the project, which will be built in segments. Most of the funding will come from local Measure M, Measure R and State funds. The project now could be well-positioned for expanded opportunities to compete for any future federal funding opportunities as part of LA Metro’s “Shovel Ready” plan to move major rail, bus, and highway projects closer to implementation.

LA Metro will present its board with recommendations for a comprehensive federal grant strategy for its major transit projects this spring. With an end-to-end travel time of 31 minutes, daily boardings are anticipated to exceed 30,000 by the year 2040.

LA Metro Director Paul Krekorian said “The East San Fernando Valley Light Rail project has been one of my top transportation priorities since I was elected to the city council. This critical backbone project will be the first light rail line in the Valley, connecting communities, revitalizing neighborhoods, reducing congestion, and improving air quality.

Last month, we pushed the project forward with a US$30-million investment in utility work to expedite construction. Now, with the Federal Transportation Authority’s Record of Decision, this line becomes eligible for federal funding opportunities, and we are well on our way toward full funding and completion of the foundation for the future of transit in the San Fernando Valley.”