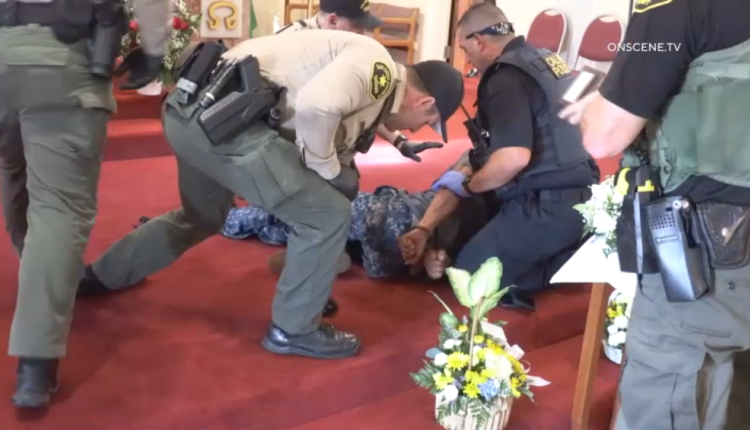 A driver leading MPs in a 45-minute chase in the San Diego area interrupted a memorial service at a church where he was taken into custody at the altar.

The chase from Jamul, east of San Diego, began Thursday morning after a man wanted on an arrest warrant for alleged criminal threats refused to stop on Route 94 in southeast San Diego County.

The driver in a black Nissan Pathfinder pulled into Chula Vista, where he crossed various neighborhoods on the city streets and briefly crossed sections of SR-125 and Interstate 805, Lt. Chris Galve.

At about 11:15 am, he stopped outside Most Precious Blood Catholic Church on Fourth Avenue and Oxford Street, jumped out of the vehicle, and ran into the church.

“We have stopped the service,” said Pastor Paul Selvaraj. “People wondered who this guy was and I didn’t know either.”

The video shows dozens of people quickly leaving the church while MPs follow the suspect inside.

“I was afraid. I didn’t know what to do as everyone was out, so I had to get away from the altar just to save myself, ”Selvaraj said.

At the altar, the man who was later identified as 40-year-old Jose Epinoza was handcuffed at the altar and escorted from the church by deputies. Selvaraj said Espinoza mumbled something, possibly prayed, at the altar before his arrest.

Espinoza is now facing additional charges of crime, evasion of arrest and misconduct.

Selvaraj said the funeral was for an 11-year-old boy who died of cancer. He estimated that there were about 200 people in the church, including the boy’s classmates.

“I am so ashamed of the family that was mourning and crying right there in the front pews,” said Selvaraj.

Among those who sprinted out of church were the boy’s family and classmates, Selvaraj said.

The mourners were finally let back in and the service continued.