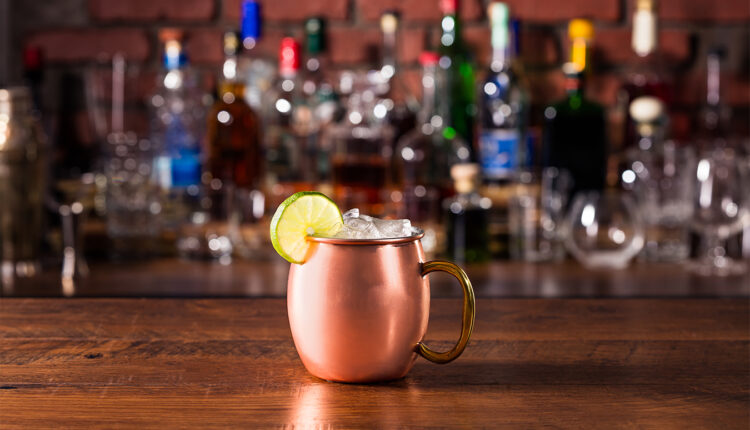 HELENA, Mont. — The popular cocktail known as the Moscow mule supposedly gets some of its flavor from the frosty copper mug it’s served in — the shiny metal oxidizes slightly and enhances the drink’s aroma and effervescence.

Flavor, however, is not the only thing the copper cup imparts. A study published in the January/February issue of the Journal of Environmental Health found that copper leaches into the drink made of ginger beer, lime juice, and vodka. In a little under half an hour, the copper levels rise higher than the safety standard set for drinking water.

A drink or two is not toxic, said one of the study’s authors, Carroll College associate chemistry professor Caroline Pharr. “Acute copper toxicity is very unlikely,” she said. “For that, you would need to drink 30 Moscow mules in a 24-hour period.”

After 27 minutes, the amount of copper leaching into the cup exceeds the 1.3 parts per million of copper that the Environmental Protection Agency sets as a safe level for drinking water.

The culprit? “Ginger beer seems to be the main driver in the leaching effect,” said John Rowley, an author of the study and an associate professor of chemistry at Carroll, a Catholic university in Helena.

To avoid a coppery mule, Pharr recommends using a copper mug lined with stainless steel. Or make sure to down the mule in less than 27 minutes.

The idea of testing copper levels in the cocktail came to Pharr at a backyard gathering where Moscow mules were being served. “A friend said, ‘Don’t drink that — it leaches copper,’” she said. A discussion ensued. “I said, ‘I can figure out if that is true,’” she said. “It turns out that no one had ever quantified how much it was leaching.”

The researchers’ base in Montana is not just any serving drinks in a copper mug — the malleable metal plays a major role in the state’s history. The mining town of Butte — 70 miles south of Helena — was nicknamed the Richest Hill on Earth because of the massive copper lode inside the hill upon which it was founded. The city was built with that wealth. Copper is still mined there, and some of it likely winds up in the copper mugs sold around the world for Moscow mules.

A bartender at Spud McGee’s cocktail lounge in Butte, not far from the city’s famed open pit mine, said she doesn’t serve that many Moscow mules. “We’re not really too worried about it honestly,” Amelia Hartwell said. “And we haven’t had any complaints about our Moscow mules.”

At On Broadway, a Helena restaurant, owner Patrick Cassidy said Moscow mules are a popular cocktail and in December the restaurant sold an average of 17 a day. He said he’s thought about the possible effects from the copper. “But if someone comes in for drinks with dinner, they are only likely to have two or three,” he said. “But I have help who drink from copper cups all day, and I plan to caution them.”

What happens now that her study has been published, Pharr said, is up to health officials. “We’ve given them the tools to decide how to proceed,” she said.

Concerns have been expressed about the copper mugs before. In 2017, Iowa said the copper mugs could not be used for Moscow mules because the FDA’s Food Code advised against food or drink with a pH of less than 6.0 — which are more acidic — from coming into contact with copper. The pH of a Moscow mule is 2.7

Ingesting copper is not entirely bad. It’s a matter of degree — copper is a necessary dietary ingredient. It’s found in shellfish, beans, nuts, and whole grains and sold in dietary supplements. It’s been shown to help prevent anemia and osteoporosis, among other ailments.

The research at Carroll was done with nine students over three semesters. Scientific protocols were carefully followed, Rowley said, and no one quaffed mules until the research was over. “We did drink Moscow mules at the end-of-the-semester party,” Rowley said.

Yes, I Know I’m Unathletic: Recapping An Eventful Day By The Water In Santa Monica