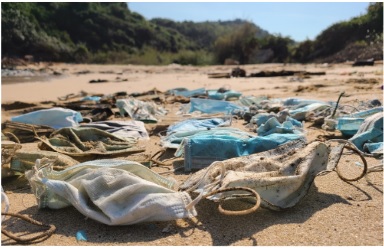 August 2021 – According to data from Heal The Bay’s Coastal Cleanups, more masks and gloves were removed from the beaches of Santa Monica Bay in the past year than common items like glass bottles.

In July 2020, the Santa Monica-based nonprofit began tracking “the effects of improper disposal” of personal protective equipment (PPE) – most of it single-use – on the Los Angeles County coast, Heal the Bay officials said.

“Through our data, we can clearly see the impact of the pandemic on our waste stream,” said Emely Garcia, senior manager of Heal the Bay’s Beach and Watershed programs.

“In the first year of tracking this item, PPE became one of the top 10 items found by our volunteers, outperforming common items like glass bottles,” said Garcia.

City officials report that the amount of trash collected by public works crews on Santa Monica beaches has decreased during the coronavirus lockdown but has increased again as stores reopened.

Public Works’ resource recovery and recycling (RRR) does not analyze the amount of PPE in the garbage, officials said.

The effects of the COVID-19 emergency and widespread regulations requiring the use of face masks are being recorded in the oceans around the world.

The group’s report, titled Masks on the Beach: The Impact of COVID-19 on Marine Plastic Pollution, estimates that this will likely result in an additional 4,680 to 6,240 tons of plastic pollution in the ocean.

“These masks will take up to 450 years to decompose, slowly turn into microplastic and at the same time negatively affect marine animals and ecosystems,” the report said.

The COVID-19 emergency has also sparked a change in daily behavior that has compounded plastic pollution, the report said.

“Hygiene concerns and an increased reliance on take-away have resulted in an increased use of plastics, especially plastic packaging,” said Gary Stokes, Director of Operations, OceansAsia.

“In the meantime, a number of measures to reduce plastic consumption, such as banning single-use plastic bags, have been delayed, paused or withdrawn,” said Stokes.

The shift to curb delivery and collection has increased dramatically in single-use plastic bags, food and beverage containers, and other single-use plastics, said Janis Searles Jones, CEO of Ocean Conservancy.

The group’s report analyzed items found in a cleanup where volunteers removed 107,219 PPE items from beaches and waterways around the world in the second half of 2020.

“The pandemic has dramatically increased the use of certain types of plastic products, particularly PPE,” Searles Jones wrote in the introduction to the report.

Items found and logged by the Ocean Conservancy cleanup volunteers included face masks, gloves, face shields and disinfectant wipes, according to the report.

Face masks made up 81 percent of the PPE items volunteers encountered, according to the report.

The Ocean Conservancy report cites researchers from the Center for Environmental and Marine Studies at Avero University in Portugal who estimated that 129 billion face masks and 65 billion gloves were used worldwide every month during the pandemic.

Rep. Richard Bloom, who has sponsored laws to curb plastic pollution in California’s oceans, said he was not surprised by the results.

“Over the past decade, plastic microfibers from clothing, skin care products and disposable wipes have been added to the ever-growing list of plastic pollution in our oceans,” said Bloom.