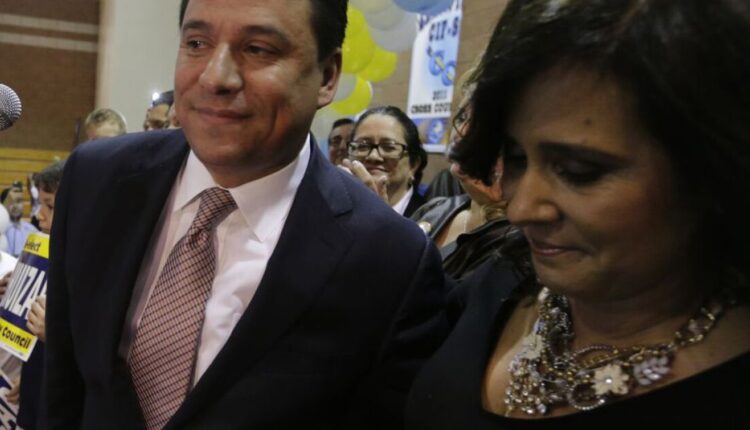 Jose Huizar developed a curious habit as a Los Angeles city councilman: He would give stacks of $100 bills to his wife, mother or brother. They in turn would write him checks or pay his bills.

The three of them confirmed Huizar’s suspected money laundering in testimony before a federal jury over the last week. Salvador Huizar recalled asking his younger brother why he needed the checks, telling jurors the councilman told him that it was “better for me not to know.”

The poignant spectacle of three family members testing against Jose Huizar came at the trial of development company Shen Zhen New World I. It was convicted Thursday of paying Huizar more than $1 million in bribes to win his support for a proposed skyscraper in downtown LA

After less than three hours of deliberations, the jury found Shen Zhen New World I guilty of five counts of bribery and three counts of wire fraud. It was the second conviction of a developer accused of paying off Huizar, who left office in 2020. In June, a federal jury found developer Dae Yong Lee guilty of paying Huizar $500,000 in cash.

Huizar, 54, is scheduled to go on trial in February. From 2013 to 2018, prosecutors say, he used his city office as an extortion racket to secure more than $1.5 million in illicit payments from developers seeking city approval of downtown projects. He has pleaded not guilty, arguing that he performed no official acts of significance for the developers.

Most of the bribes Huizar is accused of taking came from Wei Huang, the Chinese billionaire who owns Shen Zhen New World I.

Huang, 57, treated Huizar to 20 extravagant Las Vegas getaways, often flying him there on private jets, evidence at the trial showed. Huang put up Huizar and his council aide George Esparza in presidential suites and private villas, paying for their Rolls-Royce limo service, prostitutes, nightclub bottle service, and dinners with shark-fin soup and bottles of wine that cost as much as $10,000, witnesses tested.

At the trial, associates of Huang described him as a life-of-the-party gambler who basked in the millions of dollars in comps — including the private jet flights — that he got from the Wynn, Palazzo, Cosmopolitan and Caesars Palace casino resorts , where on occasion he would lose as much as $2 million in one weekend. Friends call him “the chairman.” 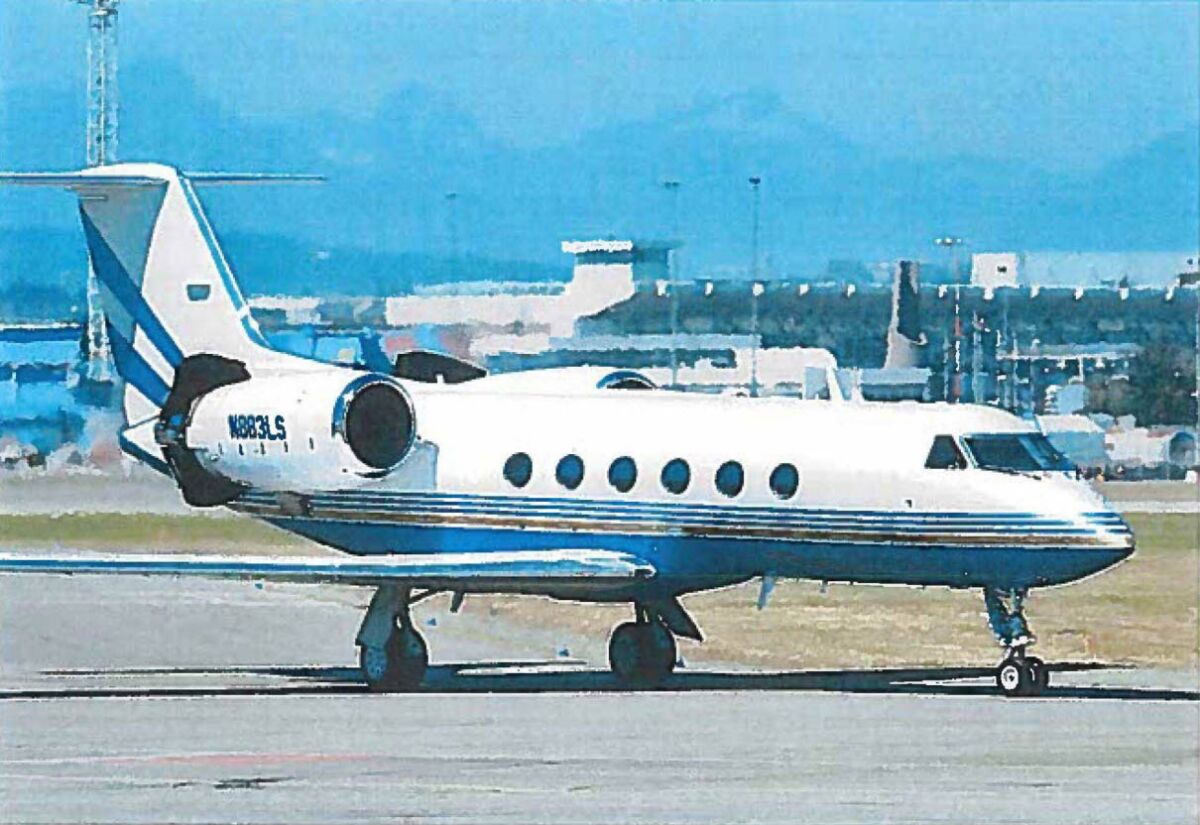 The Palazzo hotel dispatched this private jet to Los Angeles to pick up billionaire Wei Huang, who spent millions of dollars gambling at the Las Vegas casino resort. One of the passengers Huang invited to join him for a weekend getaway was Jose Huizar, then a Los Angeles city councilman.

“These were experiences that Jose Huizar could never forget,” Assistant US Atty. Susan S. Har told jurors in her closing statement.

Huang gave Huizar about $250,000 in casino chips, much of which he cashed in, according to the government. Jurors watched surveillance video showing Huang passing some of the chips to Huizar at a baccarat table.

The jury found that Huang also used a shell company to arrange a $600,000 loan for Huizar to quietly settle a sexual harassment lawsuit that could have harmed his 2015 run for reelection. “This was not a loan; it was a bribe,” Har said, reminding jurors that Huizar never repaid it and that Huang never sued to get the money back.

Huang, who owns a house in San Marino, used to travel often to the United States but has not returned since 2018. He was charged with bribery and fraud in 2020.

Shen Zhen New World I could face millions of dollars in fines at its sentencing on Jan. 23. Richard Steingard, an attorney for the company, said an appeal was likely. His co-counsel Craig Wilke conceded that the flow of benefits from Huang to Huizar was troubling, but called the councilman’s actions on the developer’s behalf “trivial.”

“Giving a public official gambling chips is not bribery,” Wilke told the jury, saying the amount was insignificant to a billionaire. Everything on the skyscraper project was “aboveboard,” he added.

“Does it violate city ethics rules? Of course it does,” he said. “Councilman, you’re not supposed to do that.”

Huang’s parent company, Shenzhen New World Group, is based in Shenzhen, a large city in China near Hong Kong. His sole foray into US real estate was his purchase of two hotels in Los Angeles: a Marriott downtown in 2010 and the Sheraton at Universal Studios in 2011.

The jury found that Huang bribed Huizar to win city approval of a 77-story tower next to the former Marriott, now called the LA Grand, at Figueroa and West 3rd streets. At the time, the Boyle Heights councilman, who represented most of downtown LA, chaired the land-use committee that has the power to approve or block major developments.

Esparza, the Huizar aide who has pleaded guilty to racketeering, tested that Huizar viewed the developer as a “fat cow” he could milk for money. He recalled Huizar getting expensive bottles of wine delivered to his room at Huang’s expense, then asking Esparza to smuggle them out of the hotel in duffel bags to take home. Huizar also stole hotel towels, he said.

“I took chips; I never stole towels,” Esparza tested with a grin, drawing chuckles from jurors.

Much of the trial focused on attempts by Huizar and Huang to cover up what prosecutors called their “corrupt relationship.” Assistant U.S. Atty. J. Jamari Buxton urged jurors to keep in mind the roundabout transactions that Huang had a disbarred lawyer set up to keep secret his payment of about $600,000 to settle the sexual harassment suit.

“He acted like what they were doing was illegal, because it was,” Buxton said. “Jose Huizar knew it, and Chairman Huang knew it too.”

After security at one of the Las Vegas casinos discovered that Huang was flying an elected official on its jet, Huizar had himself listed on future flight manifests under the names “Juan Rodriguez” or “Juan Hernandez,” text messages show.

One of those flights came a day after Huizar and Huang reviewed the skyscraper plans with a large group of city officials. Shawn Kuk, then a Huizar planning aide, testified that he had known about the Las Vegas trips, “I just wouldn’t have trusted the process.”

Isidra Huizar, the councilman’s 83-year-old mother, testified that her son occasionally asked her to give him blank checks in return for cash. “He would just say leave me a check on the little table with your signature and that’s it,” she said through a Spanish interpreter. Asked why, she responded: “He never told me, and I never asked him.”

She squinted at bank records on a computer screen showing that she deposited $13,000 in cash shortly after her son’s Huang-funded trip to an Australia casino resort in January 2016 and days later wrote checks for him, including a $7,730 one to Chase Credit Card for her son’s account. She told the jury she did not remember the checks.

Richelle Rios, Huizar’s estranged wife, reviewed records of $1,000 and $500 deposits of cash into her bank account. Asked where it came from, she told the jury: “From Jose.”

Rios recalled finding a half-inch stack of $100 bills in the house shortly after one of his first Las Vegas trips with Huang and having an “unpleasant” conversation with her husband about the money. She tested that she later found an inch-thick pile of $100 bills inside a money belt stashed in the pocket of one of Huizar’s suit jackets. 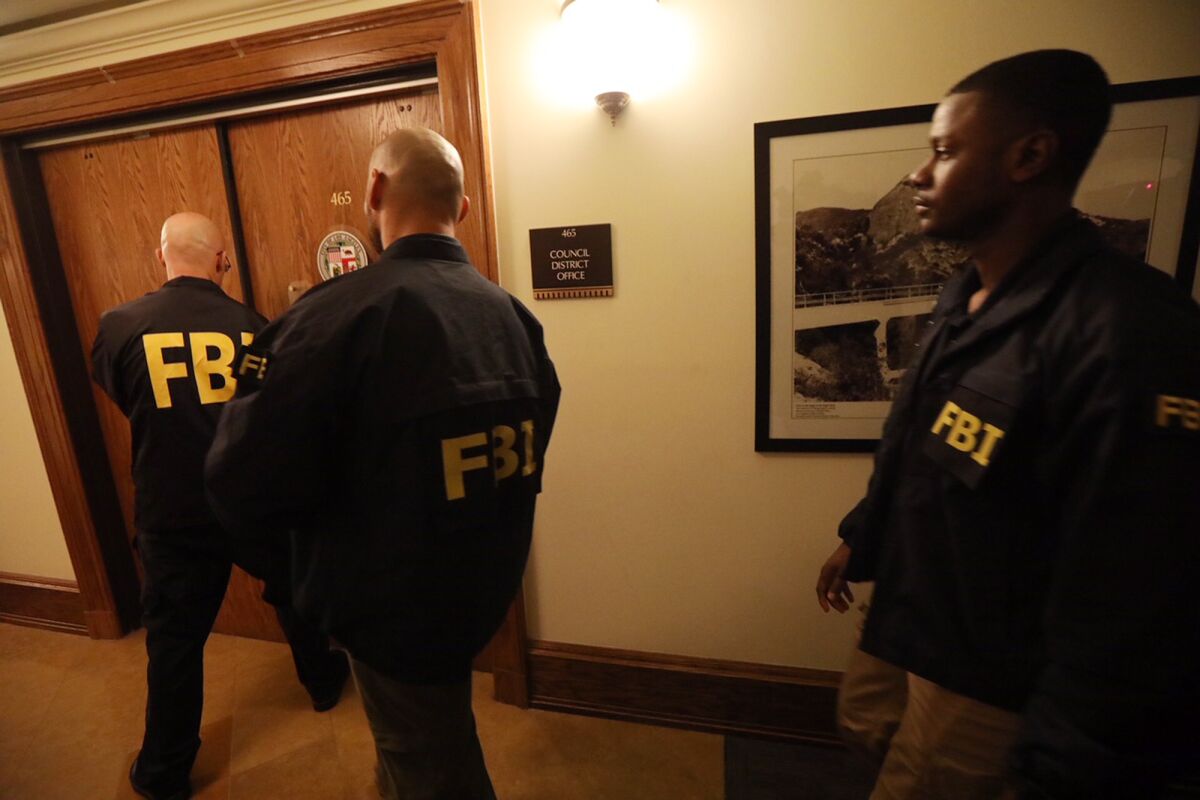 Rios, who quietly sobbed on the stand, told the jury of turmoil in her marriage after she learned her husband was having what she called a “consensual affair” with an aide. “I was angry and just devastated, and I just felt humiliated,” she said. She nonetheless stuck with Huizar and launched a campaign to take over his council seat. She dropped out of the race as the corruption case grew bigger.

“I really didn’t see a path forward after the FBI searched our home,” she told the jury.