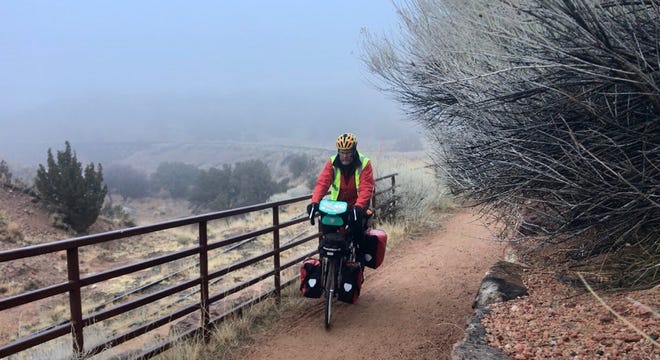 Photojournalist Dave Klein has seen some of America’s most beautiful vistas up close.

But a month-long, 3,200-mile journey that has taken him across the country has not been a joy. Klein, who had to postpone his adventure by a year because of the pandemic, is on a mission.

Since late November, Klein has been riding his bike across the lower half of the country: from California to Florida. The 58-year-old chief photojournalist for WDIV-TV (Channel 4) rides hundreds of miles on his bike to raise awareness and raise money for colon cancer, a disease for which early detection can save lives.

A friend was diagnosed with colon cancer and got Klein riding his bike to raise funds for the Colon Cancer Coalition.

“It’s really amazing. It’s really like a tool… a messenger to help spread the word,” said Klein, who had his first colonoscopy last year. “I feel 2,700 miles in this 3,200 mile ride, I’m incredibly mentally stronger than before.”

His friend is on treatment, which includes chemotherapy every week.

Klein, of Harrison Ward, set out on November 30 in Santa Monica, California, after traveling two days with his gear from Michigan to California by train.

Depending on weather conditions and wind direction, he’s averaged 55 to 70 miles per day, biking to scenic areas like New Mexico’s Sandia Mountains, Arizona’s Petrified National Forest and the Texas Panhandle.

In the process, Klein, who has been working at WDIV since 1999, met some interesting people. He said everyone was kind to him and appreciated his efforts.

One of the random acts of kindness Klein recalled was in northern Arizona last month when he went without his last three tablespoons of water. He was at the top of a mountain pass when a trucker showed him generosity.

“It was about 18 miles to the next town and it was going to be difficult to make it,” Klein said. “A trucker named Henry gave me three bottles of water.”

Some businesses serving climbers, bikers and other outdoor enthusiasts have closed during the pandemic, and he’s having a hard time stocking up on water and other essentials.

From sleeping on the edge of a freeway embankment to camping out in the wilderness of the Petrified National Forest, Klein has endured it all on his journey across the country.

He had a pounding headache, he said, from sleeping in a mold-spore swamp in far west Louisiana. He’s wearing bear spray and has encountered a pack of coyotes “crying like babies,” which startled him, he said.

“So much of this stuff is mental,” Klein told The Detroit News. “It’s really life-changing.”

Klein’s road trip has drawn media attention across the country. He has done several news interviews with TV stations Louisiana, Mississippi and Alabama on his way east.

Klein hopes others will no longer extend an important medical test, a colonoscopy, which looks for colon cancer and precancerous polyps in the colon.

Efforts like Klein’s are welcomed in the medical community.

“This is an outstanding achievement,” said Dr. Harry Wasvary, Chief Physician of the Department of Colorectal Surgery at Royal Oak Beaumont Hospital, who points to awareness and early detection as key in the fight against colon cancer.

One of the risk factors for colon cancer is family history. Symptoms of the cancer include a change in bowel habits and unexplained weight loss. Otherwise, said Dr. Wasvary, colon cancer is asymptomatic.