Destroyed Santa Monica statue in honor of the homeless, artist vows to reinstall it 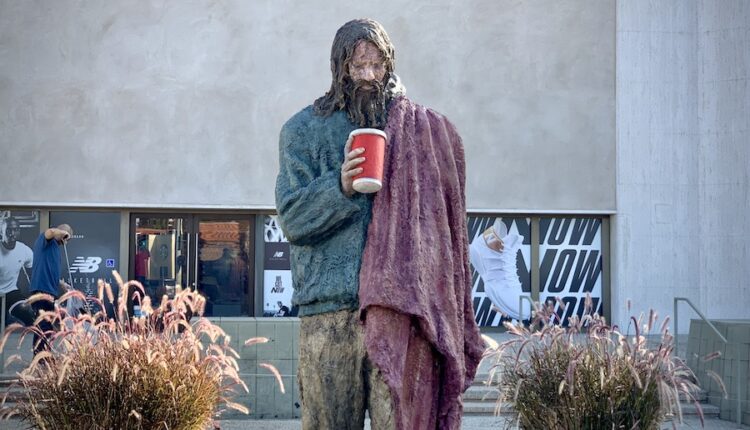 Ed Massey’s “In the Image” damaged on the corner of Wilshire and 26.

The statue of a homeless man entitled “In the Picture”, which has stood in Santa Monica for two years, was destroyed.

Located on the corner of Wilshire Boulevard and 26th Street in Santa Monica, the statue was knocked off its pedestal last week, causing significant damage to the statue itself. Ed Massey, the artist who created the work, has never seen any of his creations attacked in this way.

Although Massey’s work is known to be shown in public, the statue of the homeless man was kept in his home until the homelessness crisis reached its current climax. Massey created the statue twenty years ago after meeting a man without an apartment on the street when he was leaving some blueprints at a FedEx store. He was impressed by the man’s calm demeanor in spite of his size, and how different he seemed from the stereotypical and fearful notions of the homeless. Seeing how the number of homeless people on the streets had increased and how serious the plight was, he was determined to publicly display the statue as a confrontation for people who turn away from the subject. Massey noticed an empty dais on the building near the corner of 26th Street and Wilshire Boulevard and asked the owner of the building for permission to display it there. The originally scheduled time during which the statue was to be exhibited was six weeks; two years later the statue remained on this pedestal.

Massey said, as quoted by the Santa Monica Daily Press, “This is just a really despicable act. I suspect it’s just someone who has so much anger at a group of people, maybe it was two people who have so much hatred or hostility towards homeless and unshielded men and women that they might see on the street that they accepting their aggression on an inanimate sculpture that depicts one of the most unfortunate circumstances we see on any of our streets in town every day. “Massey added,” I’ve spoken to many people who have been around for the past nearly two years Have slept with this sculpture, even since last night, and they are very supportive and helpful. And no one showed any hostility that I could ever see in this immediate vicinity. “ 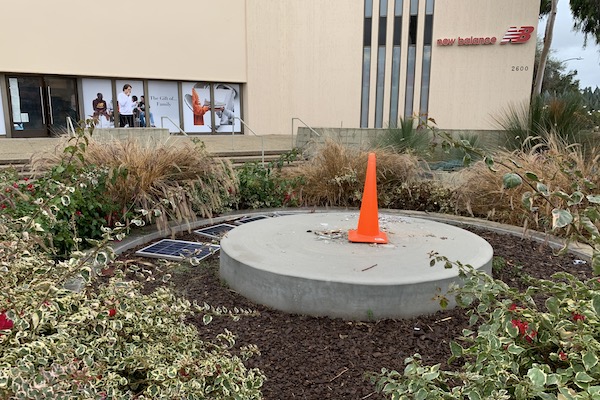 The base on which “In the picture” used to be. Photos: Sam Catanzaro.

Since much of his work is shown in public spaces and is intended to stimulate thought and sometimes outrage, Massey is very proud that “In The Image” has become a center of attention for people who stand up for the unhoused, for other artists looking for themes, the sketch, and even for tour groups. The great interest the statue aroused in the community, even the negative opinions about the statue, showed that the art installation had a real impact. However, while there has been some negative feedback, there have never been any incidents of vandalism that would indicate real hostility towards the statue. So it was a real shock to the artist that someone attacked the installation out of the blue.

The statue was damaged in several places from the fall and Massey is determined to repair it and quickly get the statue onto its pedestal, despite his worries about the strike on the plant. Massey said, “It’s fixable. I’ll fix it with our team. We will fix it and we will rebuild it. “

For example, an earlier work by Massey on display in Santa Monica in 1994 was called Morality / Mortality and featured two plaintive naked men suspended by their genitals above the body of a raped woman. The main focus of his work is social criticism, he and his brother founded Portraits of Hope, a project for school children to use their artistic skills to beautify spaces in Los Angeles and New York, like the Spheres in MacArthur Park, where thousands of brightly painted ball were released in the lake of the park. The project encourages children’s interest in art and aims to make them feel proud of their artistic work.