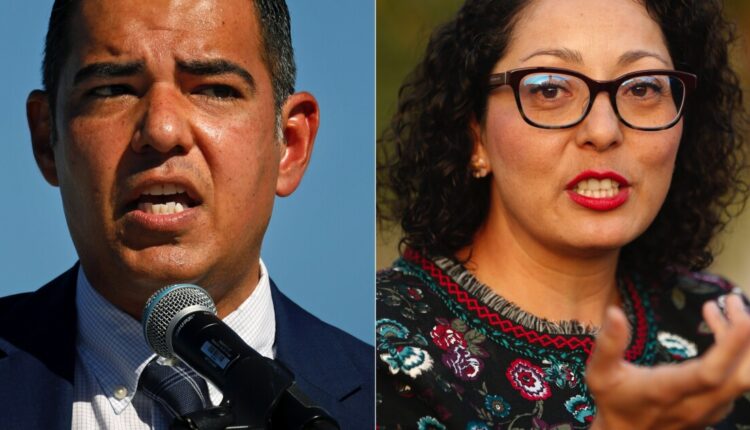 Two prominent Latino Democratic elected leaders are battling to become a new member of Congress. The race to represent a swath of Southern California that sweeps from southeastern Los Angeles cities to Long Beach will be among the state’s most contested intraparty battles, with the winner earning a perch that could become a springboard to higher office.

Long Beach Mayor Robert Garcia and State Assemblymember Cristina Garcia are running to represent the new 42nd Congressional District, a Latino majority district that was created in December by the state’s redistricting commission as California loses a congressional seat for the first time in its history.

“It’s fair to say this is one of the more prominent Democrat-on-Democrat races” on the ballot, said Robb Korinke, a Democratic strategist who lives in Long Beach but is not aligned with either candidate. (Korinke was appointed by Robert Garcia to the city’s Technology and Innovation Commission in 2015.)

The new district combined pieces of the areas currently represented by Reps. Alan Lowenthal and Lucille Roybal-Allard to account for population loss in Los Angeles County without eliminating a district where Latinos could elect a candidate of their choice.

Roybal-Allard’s district, which included much of South Los Angeles, the Eastside and southeast LA County, was the most Latino in the nation. Lowenthal’s straddled Los Angeles and Orange counties. Both announced their retirements in December, creating a rare open seat to represent California in the US House of Representatives. Robert Garcia and Cristina Garcia revealed their intentions to seek the seat soon after.

Cristina Garcia and Robert Garcia are both 44, the children of immigrants and the focus of national attention for their work. They are vying to be the most progressive in the heavily liberal district and will face off in a June 7 primary where the top two vote-getters, regardless of party, will advance to compete in the November general election. No prominent Republican is running in the race; the filing deadline is in March.

Robert Garcia’s home is in Long Beach’s Belmont Heights neighborhood, a collection of Craftsmans and beach cottages in walking distance of Colorado Lagoon and the restaurants and boutiques of the city’s 2nd Street entertainment district.

About 14 miles north, Cristina Garcia lives in Bell Gardens — not far from where she grew up — on a working-class block of modest houses with security bars on the windows and a backyard rooster that rousts the neighborhood.

The communities they live in reflect the district’s disparate constituents: Along the coast, affluent residents are focused on issues such as climate change and solar tax credits, while inland, lower-income workers worry that their children suffer higher asthma rates because of their proximity to pollution-spewing industries. Other parts of the district include Downey and Bellflower, the post-World War II tract homes of Lakewood, and Long Beach’s art deco airport, Cal State campus and port.

More than half of the new district’s residents are Latino citizens of voting age, but redistricting experts warn that turnout, particularly during nonpresidential elections, might disadvantage that electorate. Though Latinos live throughout the district, they are more concentrated in the southeastern Los Angeles cities.

“The core of the voting base is not in the area that is most heavily Latino and where Voting Act protections lie,” said Democratic strategist Paul Mitchell, referring to the landmark federal legislation that prohibits the disenfranchisement of minority communities.

Voters most likely to turn out are those who live in Long Beach, Lakewood and Signal Hill in the southern part of the district, which Mitchell and other strategists who are not aligned with any candidate in the race say benefits Robert Garcia.

The Peruvian-born gay Latino mayor of Long Beach is widely considered the front-runner.

He has been endorsed by Gov. Gavin Newsom, US Sen. Alex Padilla, Los Angeles Mayor Eric Garcetti, Lowenthal and several unions. In the two weeks after he announced his campaign on Dec. 17, Garcia raised more than $323,000.

Additionally, at least two independent expenditure committees that can accept unlimited donations are supporting his bid — one funded by business and development interests and the other by LGBTQ activists and labor.

Garcia received national attention for his handling of the pandemic while grieving the loss of his parents to COVID-19. The New York Times called Long Beach “a model for the vaccine rollout;” schools there reopened earlier than in much of California because the city, which has its own health department, prioritized vaccinating teachers early.

“I have proven that as mayor that I can lead a large complex organization and that it can be done in a way that has both common sense and is progressive,” said Garcia, who was among a handful of local officials given a prime-time speaking slot at the 2020 Democratic National Convention.

He has been accused of being too beholden to powerful donors and criticized for registering as a Republican in 2002 — less than a decade after Proposition 187, the GOP-backed ballot measure that sought to deny taxpayer-funded services to those in the country illegally.

He was a California youth coordinator for George W. Bush’s 2000 presidential campaign and founded the Long Beach Young Republicans in 2005. Garcia downplays his involvement in both, although media clips from the time quote him proudly playing a prominent role in the club. He also notes he was in high school during Proposition 187 and wasn’t involved in politics then.

Garcia said he followed his family’s lead in supporting the GOP because of their fondness for President Reagan, whose immigration policy provided the pathway for their citizenship.

He registered as a decline-to-state voter in 2007, two years before he won a City Council seat; and as a Democrat in 2010, four years before he successfully ran for mayor, according to the Los Angeles County voter registration database.

“People are allowed to grow and change,” and former Republicans shouldn’t be treated as “second-class Democrats,” Garcia said, pointing to his refusal to take corporate PAC money and support for single-payer healthcare. “What matters is your record.”

His rival, Cristina Garcia, says that his history concerns her.

“Everyone needs to run as a progressive these days. But is that what our record has shown?” she said. “How committed are you to all of this corridor, not just Long Beach?”

Garcia organized opposition to Proposition 187 while in high school. After college, she became a math teacher and moved away. Then her mother had a heart attack, prompting Garcia to return home.

She became involved in local politics, lost a City Council race in her hometown and became a vocal activist in the corruption scandal in neighboring Bell. That helped propel her to a 2012 victory in an Assembly race over a prominent fellow Democrat who vastly outspent her.

During her time in Sacramento, Garcia focused on environmental justice, notably the cleanup of the toxic lead-tainted soil near the shuttered Exide Technologies battery recycling plant in Vernon.

She was also dubbed the “tampon queen” or “period princess” — titles she embraced — because of her efforts such as making sure menstrual products are available for free at public schools in California.

The motivations that led her to run for the Legislature also made her decide to run for Congress, Garcia said.

“This region has been ignored for all my life. This is a front-line community,” she said, adding that elected officials give a lot of lip service to the concept of equity. “But how do we make sure we’re putting actions behind that?”

As the leader of the Assembly’s women’s caucus, Garcia was an outspoken advocate for victims when the #MeToo movement rocked the statehouse in 2017 and 2018. She was featured in a Time magazine photo collage of female leaders as part of its “Person of the Year ” Issue because of her work to hold lawmakers accountable for inappropriate sexual behavior.

Then she was accused of similar behavior. Two Assembly investigations found that, although she had violated the Assembly’s sexual harassment policy and was “overly familiar” with a staff member while intoxicated, her behavior was not sexual.

Garcia, while accepting blame for some allegations, noted that the more serious claims of groping were not substantiated.

In other controversies, she admitted to calling former Assembly Speaker John Perez a “homo,” though she said she didn’t mean it as a slur. (Perez has endorsed Robert Garcia.)

She was also accused by other Democrats of making a derogatory statement about Asian Americans during a debate about affirmative action. Cristina Garcia said her remark — reportedly, “This makes me feel like I want to punch the next Asian person I see in the face” — was taken out of context. She said she was trying to explain how the debate was creating unnecessary, “unhealthy” divisions among ethnic groups.

Current Assembly Speaker Anthony Rendon, whose Lakewood home is in the district, rebuked Garcia during her controversies. But he has endorsed her congressional run, as has Secretary of State Shirley Weber, Treasurer Fiona Ma, several state legislators and local elected officials from southeast Los Angeles communities.

She did not begin fundraising until after the first of the year, so her campaign finances will not be known until spring.

“It’s not the first time I’ve been out-fundraised, and we have been successful,” she said, pointing to her 2012 Assembly race, in which she ran out of money two weeks before the election. Volunteers hand-delivered tens of thousands of fliers.

“We don’t need dollar for dollar,” she said. “We need enough dollars.”