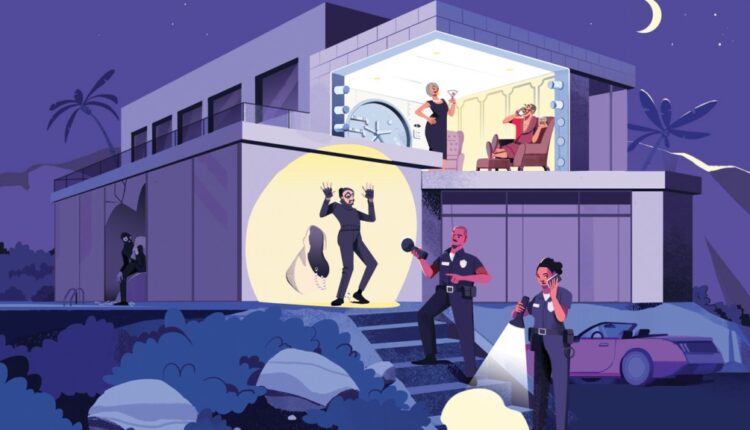 Our influx of inquiries has increased more than 1,000 percent over the past three months,” says Dean Cryer, vp international operations at Building Consensus/Panic Room Builders, a firm specializing in the building of safe rooms. “It’s gone insane.”

Because of the perceived increase in crime in metropolitan areas and high-profile murders and robberies in high-net-worth neighborhoods like Beverly Hills, “hidden rooms are definitely trending right now,” says Cryer.

In the LA area, some houses selling for as low as $4 million or $5 million are being kitted out, particularly spec homes. “I think they are not something that, in an immediate sense, increases value,” says Douglas Elliman real estate agent Greg Holcomb. “But when a buyer is interested in the house anyway, I think it does help [boost interest].”

Real estate agents, though, can never tell casual buyers or appraisers the exact location of a safe room. Often, they can’t mention its existence at all until the property is under contract. “You never know who’s potentially casing a house. The last thing you want to do is show them, ‘Here’s the panic room, and here’s how you access it,’ ” says Jon Grauman of The Agency.

Holcomb likewise had to keep mum. “We once had a property and an appraiser come and was measuring the home, and they could not figure out why there was this kind of dead space,” he says. “And we weren’t allowed to tell them what it was. They just had to assume it was dead space, when in fact behind a secret panel was a safe room.”

In business for 25 years, Building Consensus/Panic Room (which consulted on the 2002 movie Panic Room) builds various safe spaces ranging in security levels from one through eight. Safe rooms at level three may be protected with Kevlar, while a level eight is encased in thick steel. “Just the doors can be 2,000 to 3,000 pounds,” says Cryer. “And then we’re installing steel within the room. So, we’re generating up to 10,000 pounds in a room.”

Prices range greatly. “You could kit out a small closet for about $100,000, $150,000. And then it’s north of there. We’ve done one in London that had two rooms, full suites … and that was over a million dollars,” says Cryer, who says the company’s client base consists mostly of billionaires.

Most rooms are opened with biometrics, usually a finger or retina scan secreted behind a bookcase or hidden wall, and come equipped with panic buttons that automatically call security services. Cryer says the firm collaborates with security guards and former officials in law enforcement to constantly improve impregnability.

There is also an emphasis on comfort. “It’s gone from a steel, cold room where it’s a bunch of cameras,” Cryer says. “Now it’s more of a serene feeling. We say it’s an everyday use room, which when needed can be turned into a safe haven. So, you wouldn’t know what room in the house was the safe room. You wouldn’t have a clue.”

Some safe rooms are designed with all the benefits of an upscale den. “We’ve seen some of them be fitted with a bathroom, some with outlets for cable TV [and] surround sound,” says The Agency’s Emil Hartoonian. Some also are used as storage rooms for valuables, and the fanciest safe rooms have toilets and HVAC systems separate from the rest of the house. “Within the room itself, you could be in there for up to 24 hours. I mean, it depends where you are in the world. And in most of LA, you could be waiting a couple of hours before the police get to you,” Cryer says.

Some panic room owners are not waiting for the police to arrive, instead taking matters into their own hands. Hartoonian recalls one house he saw in Hidden Hills. “I think there was more artillery in there than probably one of the bunkers of the US Army,” he says. “There were packs of food that wouldn’t go bad for two years. Television, microwave, small bathroom … I mean, it was like a little self-sufficient, almost studio apartment, if you want. Ready to take on the zombie apocalypse.”

Other buyers are not just interested in staying safe within their homes — they are intent on being able to get out. “We’ve even done bunkers and tunnels. We’ve done a project out in Malibu. They wanted a secret tunnel out to the beach. So they could escape, like a secret bunker,” Cryer says.

A movie theater, converted from a safe room, in a six-bedroom home in Pacific Palisades, California, listed with Farah Levi of The Agency.
Adam Latham

Currently on the market in Pacific Palisades is a six-bedroom, 9,100-square-foot home, listed for $6,995 million with Farah Levi of The Agency, with a safe room that was converted into a screening room. The safe room was installed by a previous owner who was a legal arms dealer.

Says Levi, “Our current sellers are the ones who converted the safe room into the theater. My client is in the entertainment business and wanted a great theater in their home, and they felt this was the perfect solution. They spent approximately $150,000 on the theater conversion.” The room has 3-inch-thick steel doors that can close automatically. That feature is still possible should it be necessary at some point. The retina scan is still operational and can be used to close and open doors; it is no longer registered with the FBI.”

No one sees the trend in luxe safe rooms ending anytime soon, as security concerns increase and the focus on amenities becomes more important. As Grauman notes, particularly in spec development, the “name of the game is differentiation,” he says. “Panic rooms are just going to be one of those amenities that gets tackled on to every list of, ‘OK, every new home moving forward above x price point must have this.’ “

A version of this story first appeared in the March 16 issue of The Hollywood Reporter magazine. Click here to subscribe.