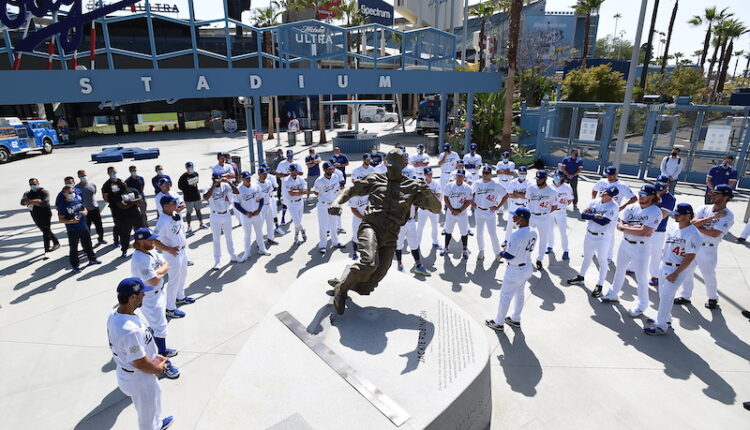 Robinson’s son David will attend the event, which will be held at the iconic Jackie Robinson statue in the central plaza of Dodger Stadium. Roberts and David Robinson will welcome approximately 60 softball and baseball players from the John Muir High School Early College Magnet.

This season marks the 75th anniversary of Jackie Robinson breaking the color barrier in baseball. MLB celebrates the landmark achievement every April 15 by having all employees on the field wear Robinson’s legendary No. 42.

In the event no games are played that day due to the ongoing MLB lockout, it’s thought Jackie Robinson Day will be celebrated later in the year — just like the league will in 2020.

A native of Pasadena, California, he was a six-time All-Star and part of the championship team in the 1955 Dodgers World Series. Robinson had his #42 jersey retired by the Dodgers on June 4, 1972, and five years later it became the all-major League Baseball retired.

Jackie Robinson’s statue has been moved

When the Dodgers first unveiled the Jackie Robinson statue in 2017 during a ceremony attended by team president and CEO Stan Kasten, partners Magic Johnson, Sandy Koufax and Don Newcombe, Vin Scully and several others, it was installed at the reserve level.

However, when the Dodgers completed their renovations at Dodger Stadium, the bronze statue was moved to Center Field Plaza, where it will eventually be joined by other pieces.