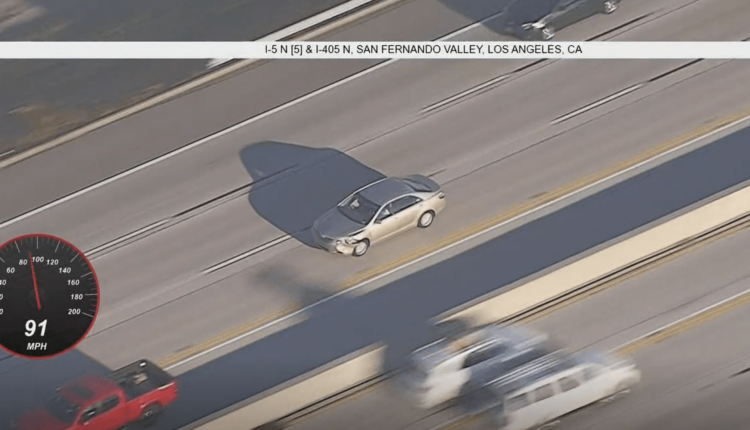 The California Highway Patrol monitored a driver leaving San Diego on Sunday afternoon in a high-speed car chase that turned into a LoJack surveillance situation.

Our Newschopper4 finished the chase on Freeway 5 around 3:20 pm

Inside the car were potential shoplifting suspects wanted because of an incident in San Diego, according to the CHP. At the beginning of the chase, the driver was seen throwing a bag of goods out of the window.

The CHP helicopter chased the vehicle but broke off chasing when the journey left San Diego due to the unpredictable and unsafe driving style. They continued to monitor the vehicle via LoJack.

The driver, who is traveling in a light gold or beige colored sedan, reaches speeds of up to 180 miles per hour.

Side wipe damage to the driver’s headlights and fenders were visible on the car as it sped past other drivers on the autobahn. The driver was moving erratically, moving quickly from the far left to the far right lane, snaking in and out of cars.

Shortly before reaching the Sylmar interchange 210, the driver drove off two more cars on freeway 5.

The driver made his way to the 14 Freeway in Santa Clarita.

There were reports that a passenger was accompanying the driver of the vehicle, but it was difficult to tell from the outside. NewsChopper4’s position in the air indicated that there were two passengers in the car, one in the passenger seat and one in the rear of the car.

The driver went through phases of safer driving before reverting to his irregular pattern, splitting lanes and speeding past other cars.

When the driver was in South Antelope Valley, CHP Newhall decided to send out units to get a view of the car. Units briefly showed up and authorities were still monitoring the car, but those units quickly withdrew.

The driver drove once on the hard shoulder of the freeway to avoid cars at high speed.

NewsChopper4 stopped chasing the driver when the driver reached D Avenue and 110th Street and headed west at around 4:12 p.m., still with no cogeneration units

This is a developing story. Please check again for updates.