Cultures fuze in LA to create a culinary classic 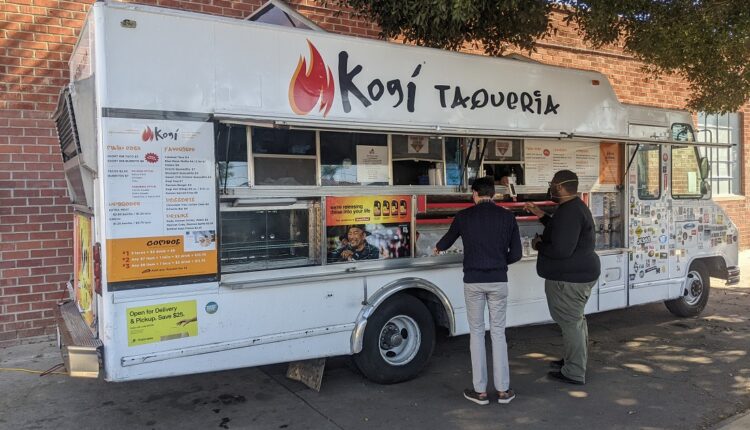 LOS ANGELES – Mexico City and Seoul are separated by 7,500 miles, but here in LA where Mexican and Korean immigrants have lived side by side for years, the two cultures have collaborated to create a unique culinary creation: the Korean taco.

Typically, Korean tacos are created by marinating meat in a soy-based sauce, grilling the meat and stuffing it inside a soft corn tortilla with other Korean toppings like kimchi, which is spicy pickled cabbage. The sweetness of the sauce combines with the saltiness of the meat, the acidity of the kimchi and the texture of the tortilla to create a unique bite of food.

“When I first tried it I was like, ‘Wow, why didn’t this happen sooner?'” said Patrick Yoo, 25, who grew up in Irvine and is Korean American.

The origins of the Korean taco are murky. There’s no definitive proof of who created the dish, but it’s clear that the Kogi food truck, founded by Mark Manguera and chef Roy Choi, helped popularize the dish in Southern California. In 2008, during the early days of social media, Kogi used Twitter to announce where its food truck would be at any given time and quickly started attracting large crowds.

“That was a big craze early on,” said Solomon Abdella, 31, of Sawtelle. “Everybody was like, ‘Oh, we got to go to the Kogi trucks.'”

Kogi is synonymous with Mexican-Korean fusion for many, but not everyone agrees on why the combination of the two cuisines works so well together. For Lisa Tan, 34, of Highland Park, it’s the ability to combine two of her favorite types of foods into one dish without choosing between them. For Yoo, the difference between the flavors used in Mexican and Korean cooking and the way all the elements mix together are what make Korean tacos special.

“I think the spices, even though they do have one or two similarities, generally, they’re a little different,” Yoo said. “The vegetables really counteract the greasiness from the meat, and so that’s why usually it tastes really good together.”

Regardless of why the combination works together, the cuisine’s popularity has grown so much since the early days of Kogi tweeting its location that it’s now prominently featured in cities far from the Pacific coast.

In Chicago, two restaurants featuring Korean tacos, Del Seoul and Seoul Taco, each have over 1,100 reviews and are rated 4.7 and 4.4 stars, respectively, on Google. In Atlanta, Hankook Taqueria serves Korean-Mexican fusion and has a 4.7 star rating on over 1,600 Google reviews. For some Angelenos, the expansion of the cuisine is a point of pride.

“I’m Filipino,” said Tyler Thayer, 24, of Santa Monica. “So, just seeing Asian cuisine that in many cases people deemed as weird, especially kimchi, you always hear about, like, kids were embarrassed to bring kimchi to school and stuff. So, to see that now in the middle of Chicago, or places where it’s not necessarily like the Asian community is the primary community out there, I think it’s super exciting.”

Steven Gorgei is a sports media graduate student at Medill. You can follow him on Twitter at @Gorgonsports.