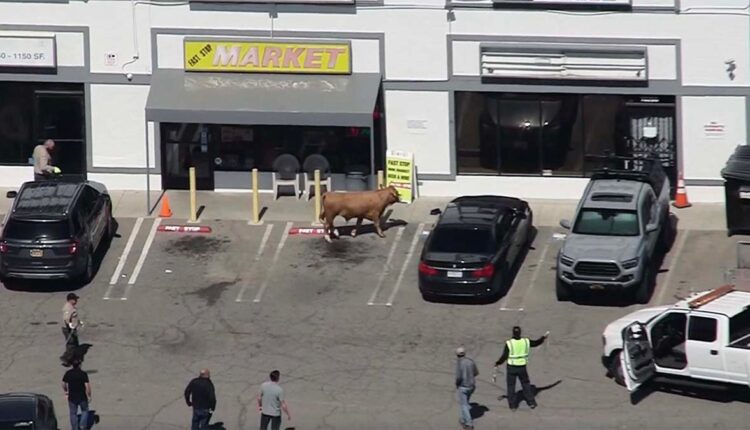 A cow on the loose north of Los Angeles navigated a freeway, city streets and even a flight of stairs at a strip mall before its spirited trot toward freedom came to an end in Lake View Terrace.

The unusual pursuit began when the cow somehow ended up on the 210 Freeway in the northern San Fernando Valley at about midday. Animal control officers in a truck and on foot trailed behind the animal as they ushered it toward the freeway exit and onto streets. Traffic was stopped on the freeway for the attempt at a roadside roundup.

A cow climbs a flight of stairs on it quest for freedom north of Los Angeles March 9, 2022.

The cow then entered a strip mall parking lot where it dodged officers, at least one of whom had a lasso, before the biggest surprise of a bizarre chase. Cautious but undeterred, the cow climbed a flight of stairs and narrowly avoided a pursuer’s rope in a sprint toward what would be short-lived freedom.

Eventually, the cow hoofed it to what appeared to be a ranch property where it was wrangled in a cloud of dust.

It was not immediately clear how the cow got onto the freeway.

A cow is captured after an afternoon on the loose in Lake View Terrace.