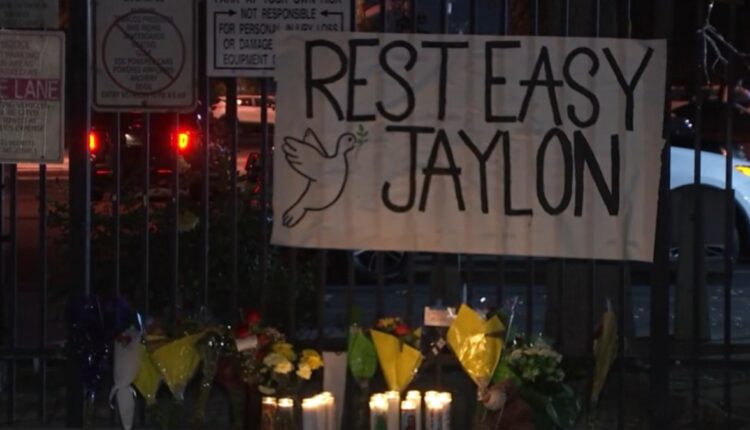 Teammates and friends of a star student and football player in Downey are remembering his young life, tragically taken away in a car crash over the weekend.

Classmates and teammates of Jaylon Connish have not stopped coming by his memorial, placing down little mementos of the promising and vibrant football star at Warren High School.

“Me and Connish, we was really really close – when I first heard about it, it hurt me to my heart,” JT Houston, a teammate and friend, said. “I at least cried every day for hours and hours and hours.”

Houston last spoke to Connish on Friday. On Sunday, he got the tragic news.

Saturday night, Connish did not survive this horrific crash off the 5 freeway, near the 605. Connish’s 18-year-old teammate driving a Nissan that veered off the freeway, hit a metal light pole and rolled down an embankment.

The driver and the other passenger, also a football player, are both still being treated tonight at Saint Francis Medical Center.

Connish’s young life and infectious smile was taken away too soon.

“His smile was not a normal smile — he would smile at any time, any moment, we gave him the nickname smiley,” Houston said.

“I’ve been the head coach for 26 years. He’s one of the most wonderful young men I’ve ever coached, that’s in all honesty the truth,” Kevin Pearson, Warren High School football coach said.

The 17-year-old had just accepted a scholarship to play football at Western New Mexico University.

“I just spoke to his coach yesterday. They’re devastated. He said, I just couldn’t wait to coach that young man. That’s what he told us. I said, man you have no idea what you’re going to miss,” Pearson said.

Pearson says he was inspired by Connish’s potential both on and off the field.

“We talked about today just emulating his life, how he lived his life and if we could live like him, we’d have great lives,” Pearson said.

His coach says Connish was the type of kid you wanted to have around.

Every Sunday, he could be seen in his Carson neighborhood, taking out everyone’s trash cans because that’s the type of gentleman he was.

LA City Council to vote on condemnation of Putin