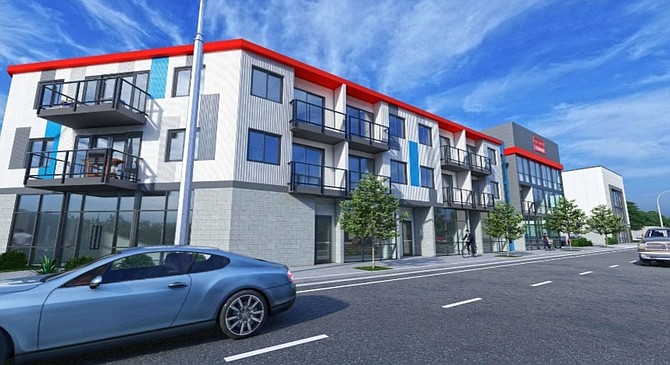 Rendering of the planned development at 13260 W. Maclay St

A storage company has proposed developing two buildings in Sylmar that combine self-storage facilities and apartments.

According to a report by Urbanize.LA, Trojan Storage of Redondo Beach has filed with the Los Angeles Department of Urbanism to build a 200,000-square-foot mixed-use complex at 13260 W. Maclay St.

The project, designed by Jordan Architects, to demolish an existing 22-unit apartment building, would include 163,455 square feet of self-storage space in two low-rise buildings, as well as 25 new apartments in a mix of one- and two-bedroom units.

The Trojan Sylmar project would consist of two parts: a four-story stand-alone warehouse and a three-story building with residential and storage units.

The buildings would also include a ground floor office, art studios and a lounge. A parking lot has space for 78 vehicles and additional open space will include an inner courtyard.

Trojan Storage has 31 locations on the west coast including locations in Glendale, Burbank, Van Nuys and Sun Valley.