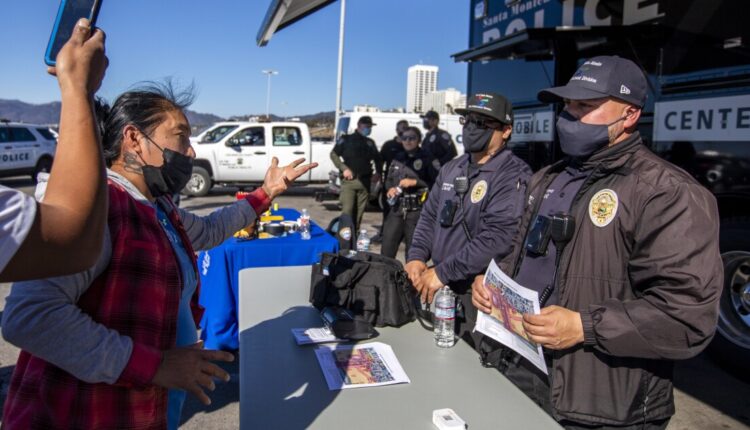 It was a gloriously sunny Saturday morning at the Santa Monica Pier on Jan. 22, when the city flexed its full might to take on Public Enemy #1:

A sandwich board warned that they were not allowed at nearby Palisades Park. Another stated the same at the entrance to the pier. “Buying food and drinks from unpermitted vendors puts your health at risk,” scolded another sandwich board. A metal sign screwed to a light pole inveighed similar doom, underneath a banner that read, “Show your local love!”

Santa Monica is becoming the next cause celebre for lovers of street food. More than 50 vendors protested in front of City Hall on Jan. 28 to decry the city’s heavy-handed tactics.

But in the famously bleeding-heart city, there are no more tears to give for unlicensed vendors.

When I told Santa Monica Councilwoman Lana Negrete that the crackdown seemed a bit much — up to 45 city workers and private security guards work on weekends specifically on the vendor issue — and that the city should just let people sell wherever they want, she scoffed.

“You can’t get a plastic straw anywhere in Santa Monica,” said the 42-year-old lifelong resident, “but all of a sudden, we’re going to lower the standards of what food to sell?”

Across the parking lot and the army of officialdom, the “enemy” seethed.

Street vendor Carmen Garcia said she and her husband recently received two tickets and a citation as they were pulling into the parking lot near the Santa Monica Pier.

Carmen Garcia angrily waved three slips of paper at me. Two of them were tickets for tinted car windows and for an overloaded pickup truck. The third was a citation for illegally selling in the city.

She then whipped out her cellphone to show me the Santa Monica-issued permits for her five fruit carts that said otherwise.

“It’s inhumane,” said the 32-year-old Oaxacan native. “I pay taxes to the city. I pay for my permit. But all they do is harass us.”

Other vendors murmured in agreement.

“I feel psychologically scarred,” said Dulce Mateos, a Los Angeles resident who hawks toys along with her husband, Francisco Balux, and also has a permit. “They’ll just follow us wherever we walk, like if we were murderers.”

Israel Hernandez has sold corn near the Santa Monica Pier without a permit for 18 years and has had his food confiscated more times than he can remember. “But what can we do?” said the East Los Angeles resident. “There’s no other work available.” 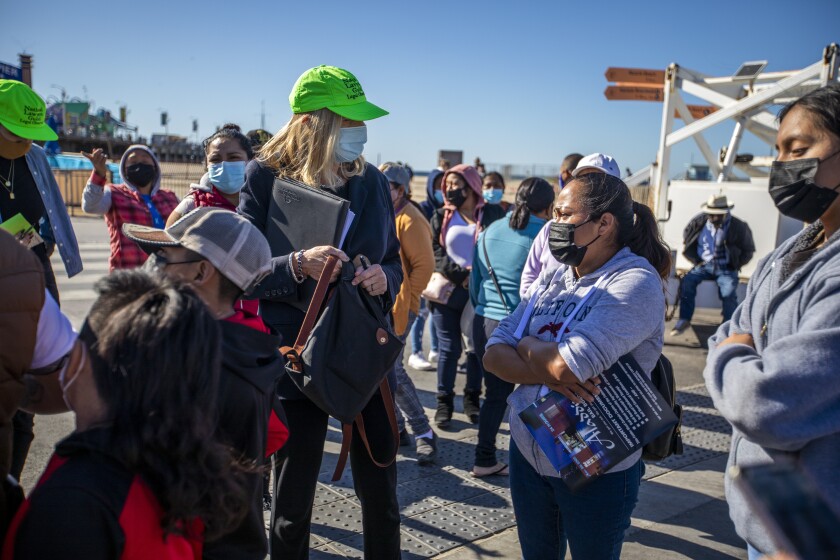 Attorney Cynthia Anderson-Barker, middle, stands with street vendors in the parking lot near the Santa Monica Pier, where she talked to them about their rights.

Fruteros and taqueros and eloteros gathered around Cynthia Anderson-Barker, a lawyer who has long worked with street vendors in the city. She showed me a video of Santa Monica police handcuffing a man for selling bacon-wrapped hot dogs from a small cart on the pier, where open flames aren’t allowed.

“It’s egregious and a disconnect,” said Rebecca Brown, branch attorney with the National Lawyers Guild. Both she and Anderson-Barker wore neon-green baseball caps with the organization’s logo. Similarly hatted volunteers interviewed angry street vendors about their travails. “Going to the beach, vendors are part of the experience. Street food is a part of Southern California.”

Harassment of street vendors is increasingly becoming a public sin in the Southland. Just look at the viral video released over the weekend of a man dousing water on the grill of Tacos La Guera in Whittier, then spraying down the grill with a fire extinguisher. The victimized seller saw huge lines in support and a GoFundMe sprout up with thousands of dollars in donations, and Los Angeles County sheriff’s deputies quickly arrested the assailant on suspicion of felony vandalism. 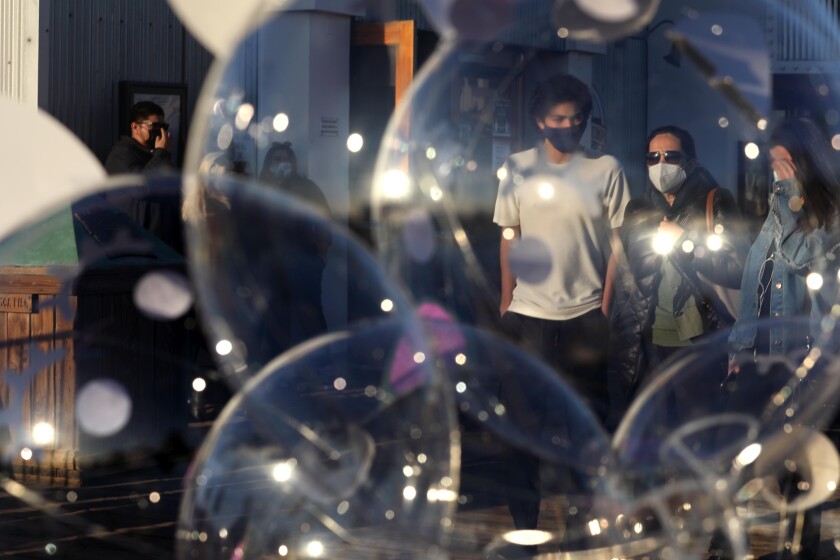 People are framed by balloons sold by vendors at the Santa Monica Pier in November 2020.

In Santa Monica, videos posted by residents show code enforcement and police officers tossing the food of unlicensed vendors into the garbage. The city installed a new fence that blocks beach access from the pier. Police UTVs zip around bike trails and the beach on the lookout for rogue street food as if the area were a military base.

Santa Monica has handed out more than 150 street-vending permits since 2019, when it became one of the first cities in California to issue them in the wake of a state bill that decriminalized such actions. But it puts severe restrictions on what vendors can sell and where — and definitely not within 100 feet of the pier, where just 13 stalls are allowed to operate.

Since the Santa Monica Pier reopened in June 2020 after a COVID-19-related shutdown, the number of vendors illegally selling there has “quadrupled,” Negrete said.

“Why is no one talking about how so unjust and unfair all this is to the people paying the money and following the rules?” she said. Negrete then spun a dark tale of carts little better than “walking bombs” helmed by out-of-towners, who bring “turf wars” under the protection of “one gentleman” who controls all the unpermitted vendors like a street-taco Svengali.

“All the locals who were selling there are scared,” said the politician, a daughter of immigrants. “Quite frankly, I get emotional. The people getting exploited are the senoras getting exploited to work all day. My goal is about equitable economic opportunity and providing opportunities. This is not that.”

She then attacked Barker. “I know she’s standing on [vendor] shoulders like a lot of advocates do, and looking for a pay day for the city. But I think she has to be careful on what morals she’s standing for.”

I went to the Santa Monica Pier on Jan. 22 to see perhaps the last chance at détente between unlicensed vendors and the city.

Tourists and morning joggers passed by Santa Monica’s lawmen and the vendors in the parking lot. Each side eyed the other warily for about an hour, like gunslingers on Main Street at high noon waiting to see who would make the first move.

“We want to invite you to teach you about how to sell in Santa Monica,” he said in stilted Spanish. “We have the information.”

The group approached the mobile command unit, where Sgt. Scott Matsuda stood near a table. A female police officer was ready to hand out slap bracelets and Santa Monica PD pens and K9 unit baseball cards and maps that showed where vendors could and could not sell.

“We’re here with arms wide open,” Matsuda said with a genuine smile. “Come and join us for that discourse. Unless that happens, nothing is going to get solved.”

“I’m sorry that you feel that way,” Matsuda replied. “I don’t know what to tell you. They need to be permitted, [vendors] have to fall within compliance.”

A chorus of complaints soon arose, and he asked everyone to speak one by one. “If we don’t talk altogether,” Garcia shot back, “you’ll just crush us.”

From the side, Officer Steven Hollowell told a colleague, “They don’t need to be this ferocious about it” before stepping in between the vendors and Matsuda.

Hollowell was dismissive when I asked about vendor allegations of police harassment. “If they don’t want to get permits,” he said, “that’s on them.”

He then pointed me to the other side of the parking lot, where about 10 other vendors looked on in bemusement. They said they were all permitted, but only Laura offered her name; everyone else refused, fearing retribution from the unlicensed vendors.

“They just form a mob — just a bunch of blah blah blah,” said Laura, who has sold trinkets on the beach for more than 20 years. She, like the people she mocked, so once sold without a permit but signed up for one as soon as the city started its program. “Just a bunch of allegations and yelling and they don’t bother to get a permit.”

Nothing was going to get solved that morning, so I left the pier. The following day, police arrested Garcia on suspicion of battery on a police officer. Video showed she slapped Hollowell after he tried to get her arm off her fruit cart, which code enforcement said was in an area she wasn’t allowed in.

“You don’t think I know my rights?” she screamed at the officers, who called a squad car to take her away. Nearby, LA County public health workers tossed her mangoes into the trash.